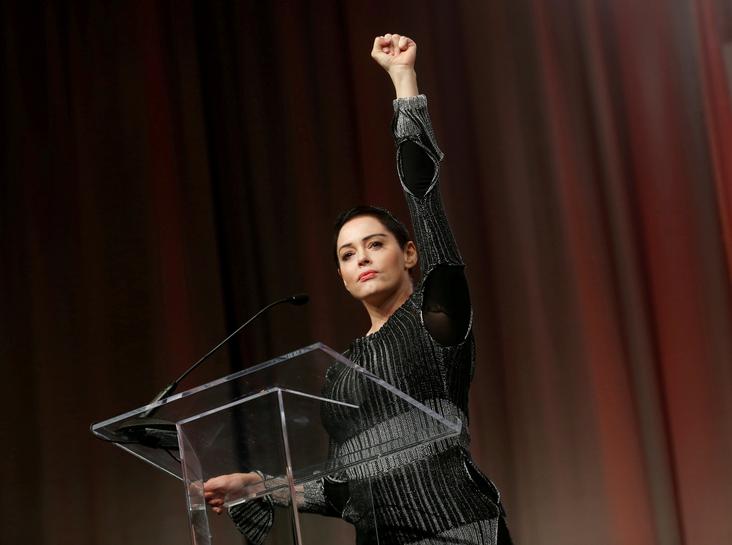 (Reuters) – Actress Rose McGowan, who has emerged as a prominent voice speaking out against sexual assault in Hollywood, said a months-old warrant for her arrest on drug possession charges was an attempt to silence her.

McGowan is one of more than a dozen women who have accused movie producer Harvey Weinstein of sexual assault or sexual harassment.

The felony drug charge stems from an investigation of personal belongings that tested positive for narcotics after being left behind on a United flight arriving at Washington Dulles International Airport in Virginia on Jan. 20, according to police.

“Are they trying to silence me?” McGowan said on Twitter on Monday. “There is a warrant out for my arrest in Virginia. What a load of horseshit.”

The Metropolitan Washington Airports Authority Police Department said in a statement on Monday that on Feb. 1 it had issued the warrant for possession of a controlled substance.

“The Airports Authority police have attempted to contact Ms. McGowan so she can appear in a Loudon County, Virginia, court to respond to the charge,” the statement said.

McGowan, who on Twitter has accused Weinstein of sex assault, was linked publicly to him following reports by the New York Times and the New Yorker.

She was the keynote speaker Friday at a women’s conference in Detroit, where she urged attendees to speak out on sex assault. McGowan, whose acting career included a featured role in the 1996 horror film “Scream,” also has tweeted regularly about the subject on Twitter with the hashtag #ROSEARMY.

The Times reported that Weinstein, 65, had reached eight previously undisclosed settlements with women who accused him of sexual harassment and unwanted physical contact.

The New Yorker reported that 13 women had claimed that Weinstein sexually harassed or assaulted them.

Weinstein has denied having non-consensual sex with anyone. Reuters has been unable to independently confirm any of the allegations.