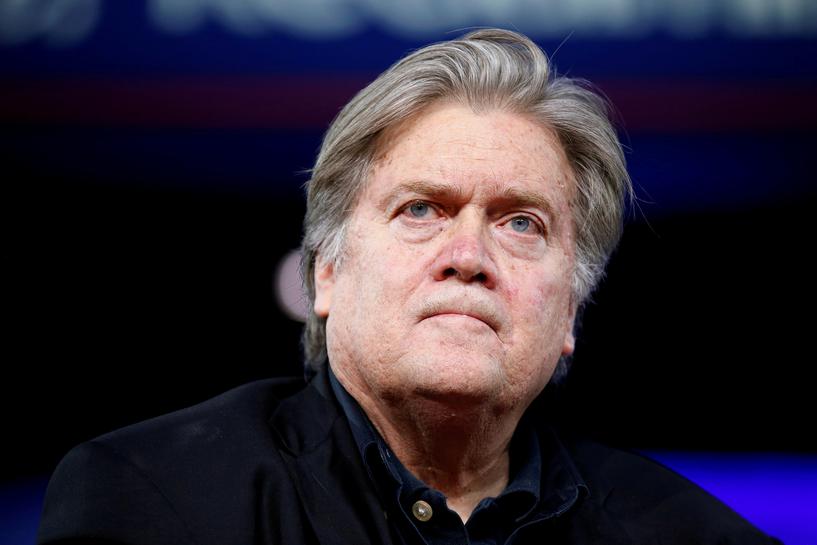 WASHINGTON (Reuters) – With Stephen Bannon, the worry always was that he could be even more disruptive to President Donald Trump’s White House from outside than he was within.

In the hours following his firing on Friday, those fears seemed warranted, as the conservative voices who viewed Bannon as one of their own howled in rage over Trump’s decision to fire his chief strategist.

The reaction was most notable from Breitbart News, the hard-right news site that Bannon ran before he joined Trump’s presidential campaign last year.

“WAR,” tweeted one of the site’s editors, Joel Pollak, who published a piece questioning whether Trump would now move in a more moderate direction with Bannon out of the White House.

Bannon rejoined Breitbart as executive chairman only hours after his firing was announced. He is now expected to use it as a platform to blast those within the White House – and perhaps Trump himself – when they don’t hew to the fiercely nationalist policies Bannon advocated as an inside adviser.

Breitbart frequently backed him up, ripping establishment Republicans such as Senate Majority Leader Mitch McConnell and Speaker of the House of Representatives Paul Ryan, blaming them for obstructing Trump’s agenda.

In recent days, Bannon had told friends he is worth tens of millions of dollars, is a worldwide leader in the populist-nationalist movement that propelled Trump to power, and could go back to Breitbart, which he refers to as a “killing machine”, or perhaps other endeavors financed by the family of hedge-fund tycoon Robert Mercer, his longtime ally.

“Steve has a powerful voice, and he’s going to keep that voice up,” said Sam Nunberg, a former Trump campaign adviser and Bannon friend. “He’s going to continue to promote policies that got Donald Trump in the White House.”

Bannon had clashed with the likes of Gary Cohn, the director of the National Economic Council, and Jared Kushner, a Trump adviser and the president’s son-in-law, both of whom favored more business-friendly, mainstream economic policies on trade, taxes, and other matters.

While Bannon’s ouster may mean a short-term win for the relative moderates in the West Wing, those he dubbed the “globalists,” it does not mean that policy battles on national security, immigration and the economy will dissipate.

Trump has a shown a proclivity for seeking counsel from former advisers such as Corey Lewandowski and Newt Gingrich and from conservative pundits such as Sean Hannity. The outspoken and provocative Bannon could join their number.

And there remain other White House officials sympathetic to Bannon’s world view, such as domestic policy adviser Stephen Miller.

Even so, Bannon’s absence will be felt.

“Trump is always going to be Trump on immigration, trade, and foreign policy. But Steve was the highest-ranking adviser who shared Trump’s world view. With him gone, there’s not a replacement for that voice in internal debates,” one administration official said.

“I think people have always overestimated how influential anyone can be on Trump. But without Steve constantly pushing back on every policy idea coming from the so-called ‘globalists,’ it’s easy to see how they could have a chance to start winning more policy battles.”

Mike Cernovich, an alt-right activist and personality, suggested to his more than 300,000 followers on Twitter that Bannon was sacked to ensure that the White House raises troop levels in Afghanistan, which Bannon opposed.

“This is a full-on coup now, guys,” Cernovich said in a posted video.

Beyond Breitbart and the alt-right, some more traditional conservative groups were also concerned about the implications of Bannon’s departure.

“We will miss Steve Bannon in the White House because he helped President Trump keep many of the promises he made on the campaign trail,” Martin, co-founder of Tea Party Patriots, said in a statement after Bannon’s ouster.

But she also reiterated her support for the president, saying “he is his own man.”

If Bannon has anything to do with it, he will push to make sure that Trump stays that way.

But some supporters still worried that the radical agenda Bannon fought for could be at risk.

“It’s a sad day for the movement,” Nunberg said. “I think it will end up being a mistake.”

(Corrects spelling of name in paragraph 22 to Viguerie.)

Commentary: Hybrid working may change contractual terms and conditions for employees
‘I Will Treat The Chinese Consulate as My Husband’s Cemetery’
PA to Singapore Food Agency director-general charged with leaking statement on school closures
6 arrested, about 1.7kg of cannabis seized in CNB operation
Hong Kong to Fire 129 Civil Servants Who Refused to Pledge Allegiance