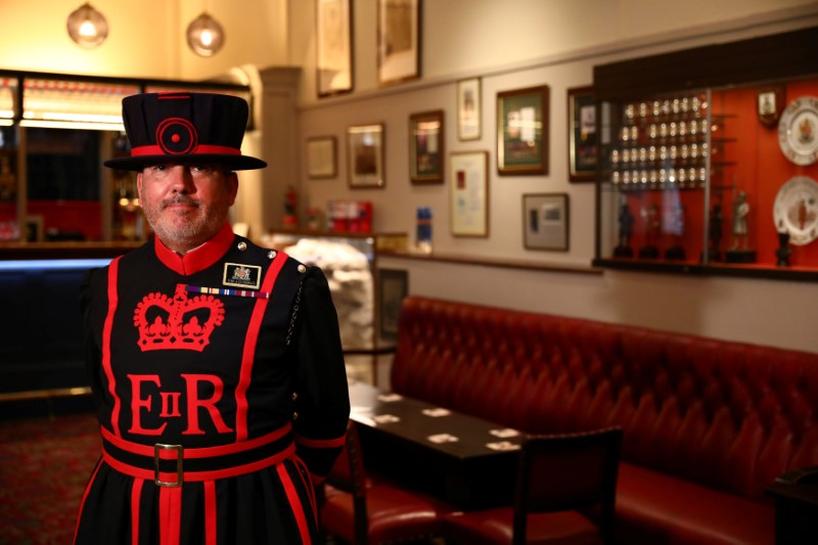 LONDON (Reuters) – After the hordes of tourists with their cameras and selfie sticks depart from the Tower of London every evening, a private drinking hole for Beefeaters comes to life within the walls of the royal fortress.

Officially called Yeoman Warders and instantly recognisable with their distinctive hats and uniforms, the 37 Beefeaters live with their families inside the fortified complex which houses the Crown Jewels, glittering symbol of the British monarchy.

While living in a castle on the bank of the Thames has a unique cachet, Beefeaters share their home with close to 3 million visitors a year and spend much of their time conducting tours, answering questions and posing for photographs.

After the daily hubbub fades, they can change out of their uniforms and head for a quiet drink at the Yeoman Warders’ Club, their own private bar in a discreet corner of the sprawling fortress – a much-needed respite.

“There are certainly two sides to life here at the Tower,” club chairman John Donald, who has been a Beefeater for 3-1/2 years, said.

“When we are here looking after the general public, we’re very much in the public domain, very, very busy answering lots of questions. And then come 6 o’clock it becomes our own little village again, where as a community we can relax and enjoy ourselves.”

That relaxation could take the form of a pint of Beefeater Bitter, a beer made by Marston’s Brewery in Staffordshire, central England, and available only in the Yeoman Warders’ Club.

The brewery also produces a craft lager called Yeoman 1485 also only available in the private bar. Both drinks are “very lovely”, Donald said.

“May You Never Die a Yeoman Warder”

Yeoman Warder John Donald poses for a portrait at the Yeoman Warders Club at the Tower of London in London, Britain July 20, 2017.Neil Hall

In keeping with the history of the Tower of London, which has served many purposes over the centuries from royal residence to the prison where two of King Henry VIII’s wives were beheaded, the club is decorated with unusual objects.

Among them is a plaque that reads “SITE OF SCAFFOLD” – kept as a souvenir after it was removed from the site where executions took place. For good measure, the Yeoman Gaoler’s axe hangs just above it, a ghoulish reminder of the gruesome past.

Other memorabilia includes a framed document bearing the signature of Rudolf Hess. The Nazi politician was briefly imprisoned at the Tower in 1941 after being caught in Scotland during a failed secret peace mission. He was one of the last prominent people to be held prisoner there.

There are silver tankards used by new Beefeaters to have a drink of port after their formal swearing-in ceremonies while their colleagues proffer the toast: “May you never die a Yeoman Warder”.

That dates back to a time when if they retired from the corps, Beefeaters could sell the job to someone else, but if they died while in office the Constable of the Tower would pocket the money instead. That system no longer exists.

Another glass case displays one of the Beefeaters’ scarlet state dress uniforms, known to gin lovers around the world from the labels on bottles of Beefeater Gin, but now worn only on special occasions such as Queen Elizabeth’s birthday.

In their day-to-day duties, Beefeaters now wear a dark blue and red “undress” uniform, while at the private club they can relax in everyday clothes.

Donald appeared content for the elaborate state dress uniform, with its heavy tunic, knee-breeches and tight white neck ruff, to be in a glass case.