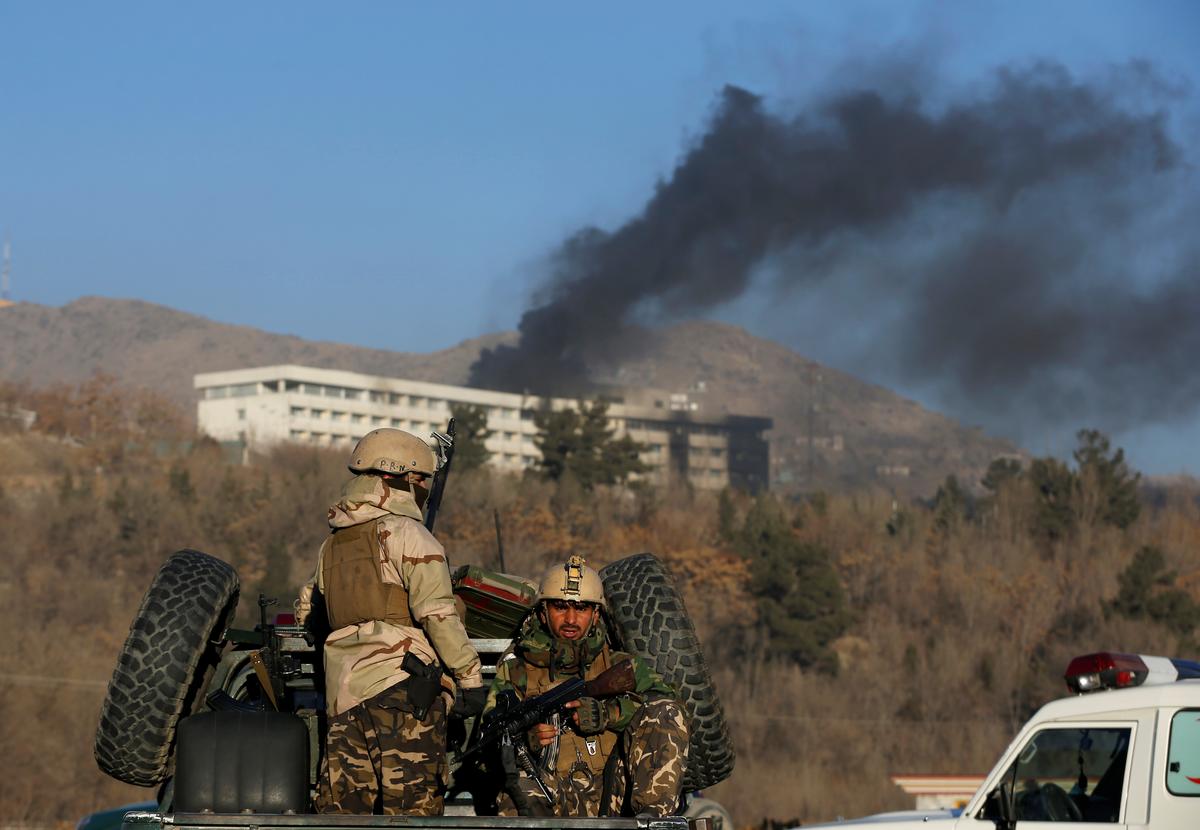 KABUL (Reuters) – Gunmen in army uniforms who stormed Kabul’s Intercontinental Hotel on Saturday and battled Afghan Special Forces for 13 hours overnight caused heavy casualties among hotel guests and staff, with the total number of dead and wounded still not known.

Interior Ministry spokesman Najib Danesh said at least five people – four Afghans and one foreigner – were killed and six wounded but the final number of casualties will almost be certainly higher. All five attackers were also killed, he said.

Local airline Kam Air said around 40 of its pilots and air crew, many of whom are foreigners, were staying in the hotel and as many as 10 had been killed. Local media reports said the dead included Venezuelans and Ukrainians.

More than 150 guests were able to flee as parts of the building caught fire, with some shimmying down sheets tied together and dropped from upper-floor windows and others rescued by Afghan forces.

The Taliban claimed responsibility for the attack.

Abdul Rahman Naseri, a guest who was at the hotel for a conference, was in the hall of the hotel when he saw four gunmen dressed in army uniforms.

“They were shouting in Pashto (language), ‘Don’t leave any of them alive, good or bad’. ‘Shoot and kill them all,’ one of them shouted,” Naseri said.

“I ran to my room on the second floor. I opened the window and tried to get out using a tree but the branch broke and I fell to the ground. I hurt my back and broke a leg.”

Even after officials said the attack was over, sporadic gunshots and explosions could be heard from the site.

The raid was the latest in a series of attacks that have underlined the city’s vulnerability and the ability of militants to mount high-profile operations aimed at undermining confidence in the Western-backed government.

Taliban spokesman Zabihullah Mujahid said in a statement the attack was carried out by five fighters.

A statement from the interior ministry put the blame on the Haqqani network, a group affiliated with the Taliban, which claimed a previous attack on the hotel in 2011.

As day broke on Sunday, thick clouds of black smoke poured from the building, an imposing 1960s structure set on a hilltop and heavily protected like most public buildings in Kabul.

The Intercontinental is one of two main luxury hotels in the city and had been due to host an information technology conference on Sunday. More than 100 IT managers and engineers were on site when the attack took place, said Ahmad Waheed, an official at the telecommunications ministry.

Danesh said a private company had taken over responsibility for security at the hotel three weeks ago and there would be an investigation into possible failings, just days after a U.S. embassy warning of possible attacks on hotels in Kabul.

Several armored U.S. military vehicles with heavy machine guns could be seen close to the hotel along with Afghan police units as Special Forces maneuvered around the site.

Hotel manager Ahmad Haris Nayab, who escaped unhurt, said the attackers had got into the main part of the hotel through a kitchen before going through the hotel, with many guests trapped in their rooms.

“When the sixth floor caught fire this morning, my roommate told me, either burn or escape,” said Mohammad Musa, who was hiding in his room on the top floor.

“I got a bed sheet and tied it to the balcony. I tried to come down but I was heavy and my arms were not strong enough. I fell down and injured my shoulder and leg.”

Although U.S. and Afghan officials say the Taliban has come under strain after the United States increased assistance to Afghan security forces and stepped up air strikes against insurgents, security remains precarious across the country.

As pressure on the battlefield has increased, officials have warned that the danger of attacks on high-profile targets in Kabul and other cities would increase.

After repeated attacks in Kabul, notably last May when a truck bomber killed at least 150 people outside the German embassy, security has been further tightened.

Large areas of central Kabul are already closed off behind high concrete blast walls and police checkpoints but the ability of the assailants to get into a well-protected hotel frequented by both government officials and foreigners demonstrated how difficult it remains to stop them.

The attack, just days after a U.N. Security Council visit to Kabul to allow senior representatives of member states to assess the situation in Afghanistan, may further weaken confidence in the government.

President Ashraf Ghani ordered an investigation and said militant groups were being helped by neighboring countries.

“As long as the terrorist groups have secure protection and safe haven, the region will not find security, stability,” he said in a statement.

“Such violence has no place here or anywhere in the world,” he said in a statement.