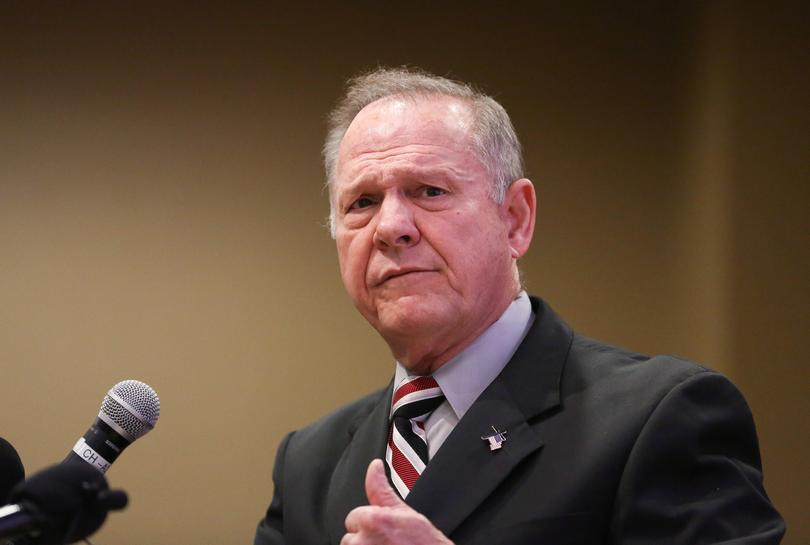 VESTAVIA HILLS, Ala. (Reuters) – Former Alabama Chief Justice Roy Moore, the Republican insurgent running for the U.S. Senate, on Saturday again flatly denied he had initiated a sexual encounter in 1979 with a 14-year-old girl, insisting the accusation was “fake news.”

In his first public appearance since a Washington Post story on Thursday detailing allegations of sexual misconduct, Moore portrayed himself a victim of a baseless attack on his character.

“I am not guilty of sexual misconduct with anyone,” the conservative Christian told an audience of about 150 people at a Veterans Day event at a public library in Vestavia Hills, outside Birmingham, the state capital.

The story was ”a desperate attempt to ruin my career,“ Moore said. ”It is completely false and untrue.”

Moore, who defeated an establishment Republican in a hard-fought primary battle, said the allegations were an attempt to sabotage his candidacy, noting they surfaced just four weeks before a special election to fill a seat vacated by Jeff Sessions when he became U.S. attorney general earlier this year. Before the scandal broke, Moore was the strong favorite to win in a state that has not elected a Democrat to the Senate in a quarter of a century.

”This article is a prime example of fake news. We do not intend to let anyone behind this story stop this campaign,“ Moore said. ”We fully expect the people of Alabama to see through this charade.”

The scandal presents a quandary to the Republicans, who hold a slim 52-48 majority in the Senate and can ill afford to lose what has been a safe seat in Alabama.

Democrats, emboldened by state and local election victories in Virginia and New Jersey on Tuesday, have sought to capitalize on the accusations in support of Alabama’s Democratic nominee, former U.S. Attorney Doug Jones, who remains a long shot.

As Moore entered the hall on Saturday, followed by a pack of news media cameras, about 10 protesters holding cardboard signs chanted “No Moore.” Some of the placards read “Grabby Old Pervert” and “Pedophiles in jail, not the Senate.”

“Moore should drop out right now,” said Lisa Sharlach, 49, a teacher from Vestavia Hills who was among the protesters. “There are real victims here and he’s unfit to serve in any elected office, now or ever.”

Others turned out to show support for Moore.

“The judge is my man,” said Paul Jourdan, 73, a Navy veteran of the Vietnam War and a Birmingham resident. “He’s got my vote and I’ll tell everybody to support him.”

“This is totally fake news – it can’t be real,” Jourdan said of the allegations against Moore. ”What else is it but political propaganda?”

Numerous prominent Republican lawmakers have called on Moore either to drop out immediately, as Senator John McCain did on Thursday, or to drop out if the allegations prove to be true, as Senate Majority Leader Mitch McConnell did.

But several Alabama Republican officials have not wavered in their support of Moore, who scored a decisive primary victory in September over Luther Strange, who was appointed to fill the Senate seat on an interim basis after Sessions was named attorney general.

Moore has been accused by a woman of initiating a sexual encounter in 1979 when she was 14 and he was a 32-year-old prosecutor, the Washington Post reported. Three other women said Moore pursued them when they were between the ages of 16 and 18, though none accused him of sexual contact.

Paula Cobia, the lawyer for one of the women who said Moore had pursued them when they were teenagers, blasted the former judge after his speech.

Cobia represents Gloria Deason, who accused Moore of supplying her with alcoholic drinks when she was 18, below the legal drinking age.

“Once again, Roy Moore is publicly making defamatory statements about the 4 brave women named in The Washington Post by calling them liars and accusing them of bribery and conspiracy,” Cobia wrote on her Facebook page.

Moore was twice forced out of his position as chief justice, once for refusing to remove a Ten Commandments monument from the courthouse and once for defying the U.S. Supreme Court decision legalizing same-sex marriage. Democrats have highlighted his penchant for incendiary statements about Muslims and homosexuality.