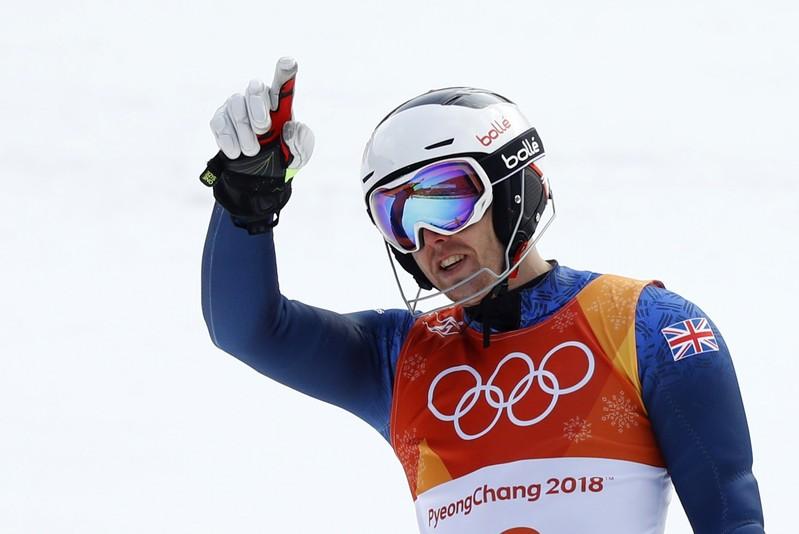 PYEONGCHANG, South Korea (Reuters) – Dave Ryding said he was just warming up in his Alpine skiing career and planned to race on until the 2022 Beijing Games after finishing ninth in the men’s slalom in his third Olympics on Thursday.

The 31-year-old Briton, who famously learned to ski on an artificial slope in his native Lancashire, was clearly encouraged by Swedish veteran Andre Myhrer’s victory at the Yongpyong Alpine Centre.

“Myhrer is 35 and the last winner Mario Matt was also 35 and at the next Olympics I‘m 35, so I’ll try to keep that trend going,” he said, taking the liberty of adding a few months to Matt’s age at the time of the Sochi Olympics.

“Hopefully I can podium again in between the Olympics to show people I can do it. I believe I’ve got it in me, I‘m just not leaving it all out there all the time.”

Ryding’s rise from dry slope to the top echelons of the sport has been remarkable and he became the first Briton in 36 years to get on World Cup podium when he finished second behind Marcel Hirscher in the Kitzbuehel slalom last year.

His own harshest critic, Ryding was not entirely happy with ninth on Thursday.

“I feel I could have done more but I think a lot of other people do as well,” he said.

“A top 10 at the Olympics after the dust settles I’ll be pretty proud of and in four years’ time I will have something to really build on.”

Graham Bell, who represented Britain in Alpine skiing at five Winter Olympics, believes there is still the potential for Ryder to get better.

“He really used to struggle with the steeper slopes, that was the one thing he didn’t learn when he was on Pendle dry slope,” he told Reuters.

”But his progression has been incredible. If you look at the way he has come through since the 2010 Olympics, it’s just been constant improvement all the way for eight years.

“You could argue that one of the things he lacks is that final risk-taking, but if he takes some risks he can be really quick.”

Bell said Ryder’s unorthodox starting point had also offered him advantage over rivals who grew up skiing on snow in the Alps, not least in his work ethic.

“He’ll spend a lot of time in indoor snowdomes, whereas Alpine nation skiers won‘t. They won’t take the benefit of the snowdome because they can’t stand the boredom.”