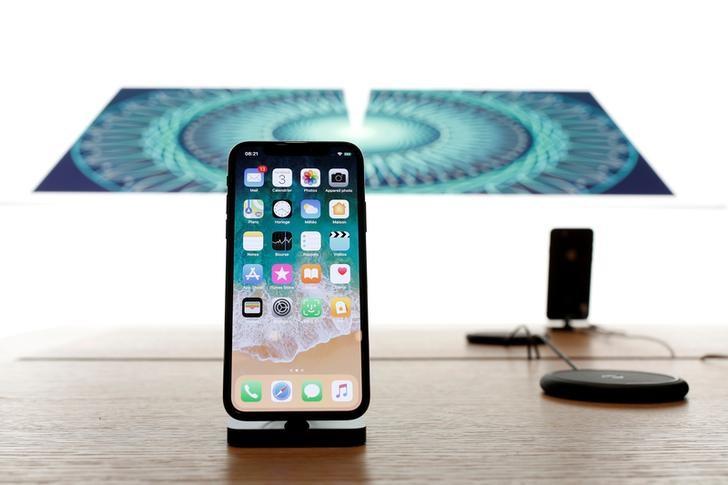 SAN FRANCISCO (Reuters) – When Apple Inc (AAPL.O) announces its first-quarter earnings on Thursday, investors will seek signs of whether the company’s $999 iPhone X launched last autumn was a Steve Jobs-style hit or, as more analysts suspect, a letdown.

In recent weeks, Wall Street analysts have come to a consensus that iPhone X sales were slower than previously expected for the first quarter that ended in December and may drop off sharply for the March quarter.

Analysts have lowered their expectations for Apple’s second- quarter revenue guidance to as low as $60 billion from a previous average of $67 billion.

Combined with concerns about the impact of an imbroglio in which Apple acknowledged slowing down phones with worn-out batteries, the weak iPhone X performance has again raised the question of whether the company can keep up its rapid revenue growth without a new hit product.

With eight different iPhone models priced from $350 to $999 on sale over the holidays, Apple showed that it has moved decisively away from co-founder Jobs’ tight lineup of premium-priced products and embraced an iPhone-for-everybody strategy.

Analysts are questioning whether Apple can boost its revenue even as iPhone sales essentially plateau.

“Apple will have to answer the question of what’s next,” UBS analyst Steven Milunovich wrote in a note to investors. “More services to monetize the base of one billion customers and eventually enhanced [augmented reality] capabilities may be part of the answer.”

Analysts still expect Apple to post record revenue, hitting the top of its $87 billion guidance for the holiday quarter. But they have slashed revenue estimates for the March quarter and expect the company to sell fewer iPhones in fiscal 2018 than initially thought.

BTIG analyst Walter Piecyk spotlighted a steadily lengthening replacement cycle as new iPhones offer only small improvements over prior models. Now that it has become clear that a new battery can give life to an old phone, more customers may choose to delay an upgrade, especially with Apple cutting the price of a battery replacement to $29 from $79.

Analysts still believe Apple will report sales of $272.2 billion for its fiscal 2018, 18.7 percent above its $229.2 billion in fiscal 2017. That will be driven largely by higher average prices paid for iPhones, they said.

But Apple does not give data on specific models, and with the wider lineup, analysts must do more guesswork based on surveys and other tools. They also find it harder to predict how much money Apple makes off each phone.

“We believe that gross margins are a key wild card for investors, given limited transparency into relative margins across iPhone [models],” Sacconaghi said in a note to investors.

All in all, it’s a far cry from the days of Jobs, who shrank the company’s product lineup when he returned to the helm in 1997 and kept it limited to a few models of each product at one time until his death in 2011.

But the Apple of today has something Jobs never had: An imposing user base into which it can sell a host of other products and services.

Trip Miller, managing partner at Gullane Capital and an Apple investor, believes Apple’s services segment is the firm’s next hit product. Analyst expect it to hit sales of $34.7 billion this year, up 16 percent.