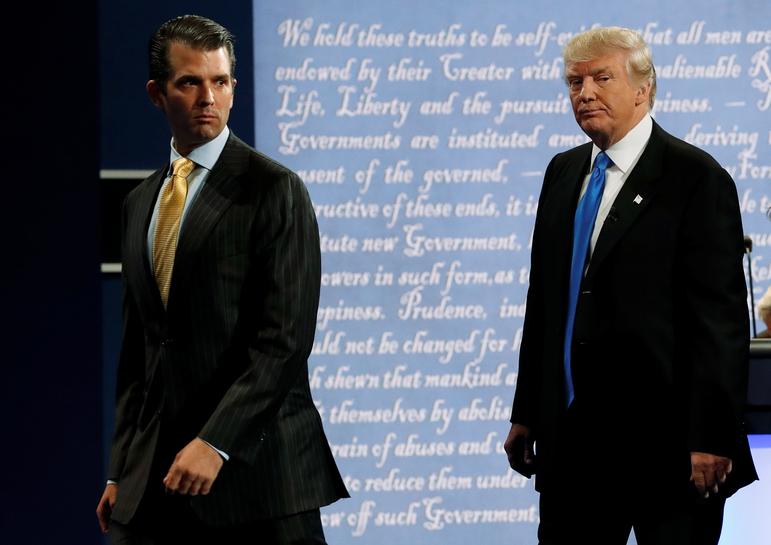 WASHINGTON (Reuters) – Fresh off one foreign trip and preparing for another, Donald Trump was enjoying a period of relative calm – until the White House was rocked by a fresh controversy over contacts between the president’s campaign and Russia.

For Trump, who has been swept up all year in crises of his own making, this time the target was his eldest son, Donald Trump Jr., whose meeting with a Russian lawyer last year led to accusations that the president’s son entertained working with Russians to spread negative information about Democrat Hillary Clinton.

Among Trump’s wide-ranging group of outside advisers and former campaign officials, Donald Jr.’s meeting with the lawyer on the expectation of gaining access to negative information on Clinton was seen as problematic, a demonstration of the son’s political inexperience, but not illegal.

“You can’t shrug this off even though you know he’s very likely going to be okay,” said an outside Trump adviser, who asked to remain unidentified. “This is the president’s namesake and you have to circle the wagons in defense of the president’s son.”

“There’s no question in my mind that every person in the White House has some level of concern about this. Otherwise it’s malpractice,” the adviser said.

Inside the White House, the mood was one of heavy acceptance that another political problem had emerged but also of caution as to its significance for a wider probe into Russia’s meddling in the election and whether there was collusion with the Trump campaign.

Benumbed by previous crises from the firing of then-FBI Director James Comey to the appointment of a special prosecutor, White House officials showed no signs of panic and said they were trying to advance the president’s agenda.

The new incident erupted as Trump seemingly enjoyed a rare moment of calm. His trip to Warsaw and Hamburg last week went fairly smoothly, although critics accused him of not being tough enough in his meeting with Russian President Vladimir Putin.

On Wednesday, he is to depart to Paris for talks with French President Emmanuel Macron and to participate in flag-waving Bastille Day ceremonies.

Trump himself was described by the White House as frustrated by yet another distraction involving the Russia investigation.

“He knows that he didn’t do anything and he really wants to focus on the good things that are happening and the things he was elected to do, and he doesn’t like it when things get in the way,” a senior White House official said.

The president offered a restrained reaction, not resorting to Twitter to launch a tirade against his critics, but issuing a brief statement praising his “high-quality person” who showed “transparency” by releasing the email chain with the lawyer on Tuesday.

There was a sense among former campaign advisers that Donald Trump Jr. had shown his political naivete by agreeing to the meeting.

They noted that it took place at a time when Trump had a barebones staff and that his family members, initially reluctant to getting involved in his campaign, were searching to carve out space for themselves.

“Besides proving that he was gullible and he got snookered, it’s still not a smoking gun,” said one former campaign adviser.

Among even Republicans, there was dismay at the turn of events.

Conservative author Quin Hillyer wrote in a blog post that Trump should step down for cozying up to Russia. (The blog link is here)

“The American people absolutely cannot trust Trump’s objectivity about Russian intentions and Russian actions,” Hillyer wrote. “This is an utterly untenable situation. For the good of the country, Trump must lance the boil, and resign.”

The outside Trump adviser said the Trump Jr. case “unfortunately supports the narrative” advanced by Trump’s Democratic opponents and propagated by what Trump world feels is a left-leaning news media.

“Donald Jr. is the nicest of nice guys, genuinely authentic,” the adviser said. “A lot of us are disappointed that if it had to be somebody, why did it have to be Don Jr.?”