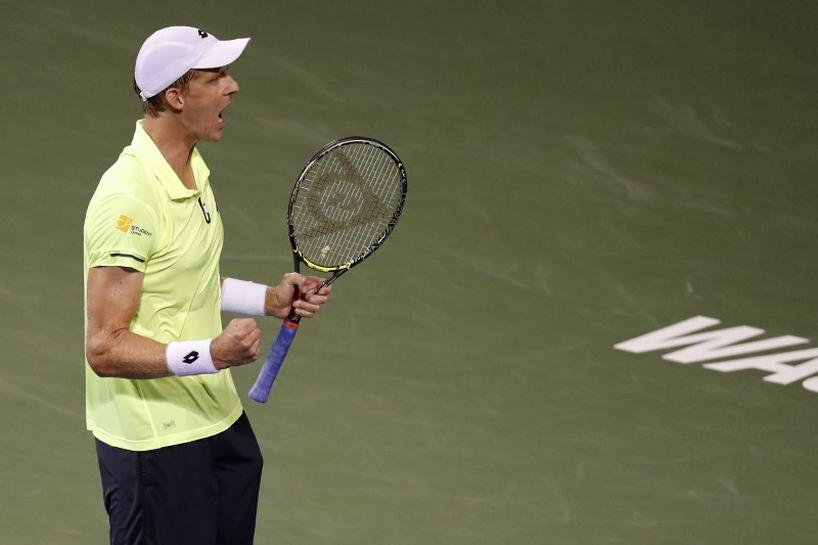 The clock had almost struck midnight when the 15th seed finally closed out the third-round match with his 21st ace to seal a 6-3 6-7(6) 7-6(7) victory in a little under three hours.

In a high-quality contest, 45th-ranked Anderson seemed to have frittered away his chances when he wasted a first match point in the second set but regrouped mentally and even survived a match point against him in the deciding tiebreak.

Anderson’s power game is ideally suited to the super-slick center court surface at Rock Creek Park that has officially been measured as faster than Wimbledon and the Australian Open.

Thiem staved off defeat the first time after an 11-stroke rally culminated with a whipped forehand winner into the corner that Anderson could only watch helplessly as it whistled past.

The Austrian then captured the next two points of the tiebreak to level the match at one set apiece and send the contest into an exciting decider.

“I felt I had it in the second set but I tried to stay as positive as possible,” 31-year-old Anderson told Tennis Channel.

“I was down two breaks in the third but kept fighting and managed to play some of my better tennis.”

In quieter surroundings on an outside court, Indian world number 200 Yuki Bhambri continued his dream run.

After taking out defending champion Gael Monfils in the second round, Bhambri produced a successful encore to beat Argentine Guido Pella 6-7(5) 6-3 6-1 and set up a quarter-final encounter with Anderson.

As play extended into Friday morning, Alexander Zverev beat American Tennys Sandgren 7-5 7-5 in a match that finished at 1:25 a.m. local time, with the German advancing to meet Russian Daniil Medvedev in the quarter-finals.

Japanese second seed Kei Nishikori’s match ended 20 minutes later as he saw off Argentine Juan Martin Del Porto 6-4 7-5 to advance to the quarters, where he will face American Tommy Paul.

However, second seed Kristina Mladenovic could not avoid an upset when the Frenchwoman was thrashed 6-2 6-3 by Canadian 17-year-old Bianca Andreescu.

Next up for 167th-ranked Andreescu is a quarter-final against German Andrea Petkovic, who blanked Canadian Eugenie Bouchard in the third set for a 6-2 4-6 6-0 victory.

Reporting by Andrew Both in Cary, North Carolina and Simon Jennings in Bengaluru; Editing by John O’Brien