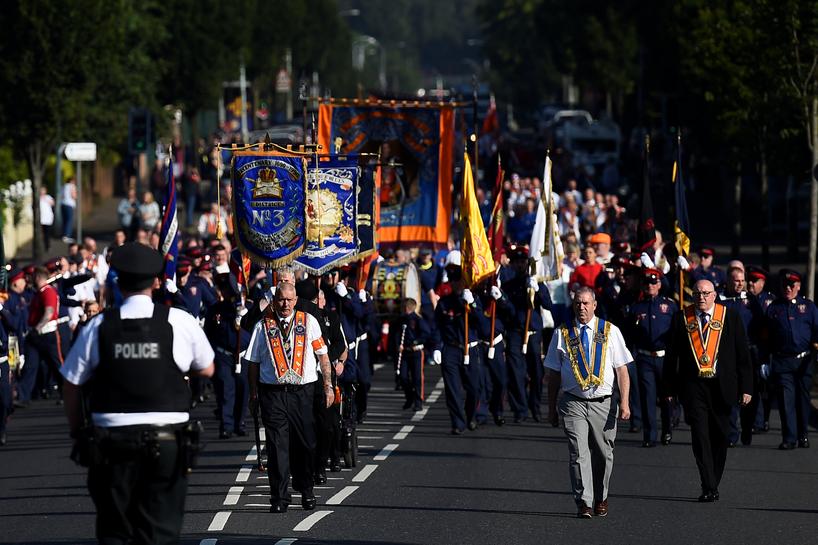 A power-sharing coalition between pro-British Protestant unionists and Irish Catholic nationalists collapsed in January but the protracted political impasse has not to date spiralled into renewed sectarian strife.

Annual Marches have seen less violence since a 1998 peace deal ended three decades of sectarian fighting in which 3,600 people died, but traditional July and August marches are still seen as a barometer of inter-communal relations.

Tens of thousands of mainly Protestant unionists, some wearing orange sashes and bowler hats began marching across the province early on Wednesday to the accompaniment of pipe bands.

The marches mark the 1690 victory by Protestant King William of Orange over Catholic King James at the Battle of the Boyne, which secured Protestant ascendancy in Britain and Ireland.

The sort of angry protests by nationalists, who want Northern Ireland merged with Ireland, that frequently greet the marches were nowhere to be seen, though the worst trouble tends to occur late in the evening.

A morning unionist march past an Irish nationalist estate in North Belfast that has often been the scene of violence passed off without incident. Marchers agreed to cancel the evening leg, which has frequently caused street clashes.

Police officers stand along the route of the Ardoyne parade during the Twelfth of July events in Belfast, Northern Ireland July 12, 2017.Clodagh Kilcoyne

The grand secretary of the Orange Order, which organises the marches, said there appeared to be less tension this year.

“We took a deliberate decision last year not to issue statements about parades so that would not increase tensions. I believe that paid off,” Mervyn Gibson told the BBC.

Police said they had launched an investigation after some unionists overnight burned a replica coffin bearing the image of Martin McGuinness, former leader of the nationalist Sinn Fein party in Northern Ireland, who died in March.

The coffin was burned on a large bonfire in Belfast along with Irish flags and Sinn Fein election posters.

Sinn Fein national chairman Declan Kearney described the burning of the coffin as a “particularly sickening manifestation of hate” and called on unionist politicians to condemn it.

Some commentators linked the collapse of talks between Sinn Fein and the Democratic Unionist Party earlier this month to a reluctance to risk angering supporters ahead of July 12 by making major concessions.

Talks between the parties on resurrecting the power-sharing government are to resume later in the summer.

The governments of Britain and Ireland have warned that failing to forge a new deal would have “profound and serious” implications and limit Northern Irish influence in Britain’s negotiations to leave the European Union. However, no one is forecasting a relapse into serious sectarian violence.