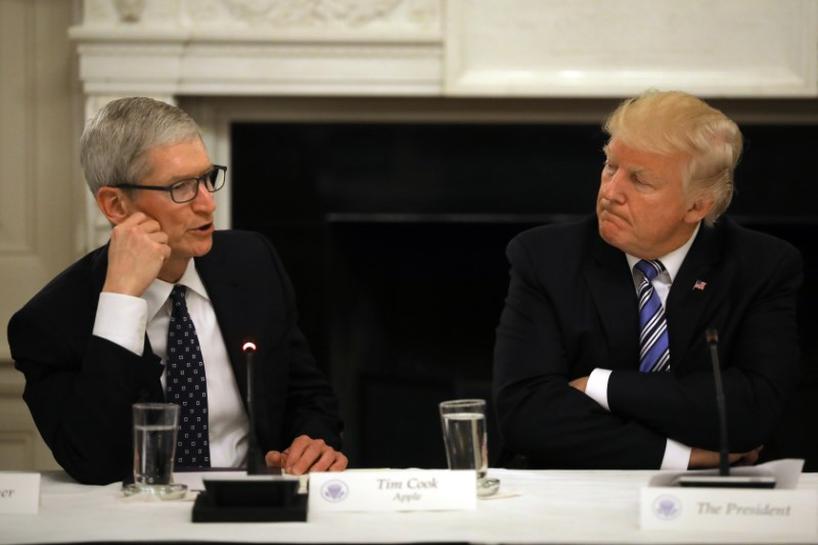 (Reuters) – Apple Inc (AAPL.O) CEO Tim Cook has joined a chorus of business leaders who have voiced their opposition to President Donald Trump after he blamed white nationalists and anti-racism activists equally for violence in Virginia over the weekend.

“I disagree with the president and others who believe that there is a moral equivalence between white supremacists and Nazis, and those who oppose them by standing up for human rights. Equating the two runs counter to our ideals as Americans,” Cook wrote in a note late on Wednesday to employees, according to technology news website Recode.

Cook also said in the letter that Apple will donate $1 million a piece to the Southern Poverty Law Center and the Anti-Defamation League and will match two-for-one their donations to the organizations and other human rights groups until Sept. 30.

“Regardless of your political views, we must all stand together on this one point — that we are all equal. As a company, through our actions, our products and our voice, we will always work to ensure that everyone is treated equally and with respect,” Cook wrote.

“The events of the past several days have been deeply troubling for me, and I’ve heard from many people at Apple who are saddened, outraged or confused,” Cook said.

“What occurred in Charlottesville has no place in our country. Hate is a cancer, and left unchecked it destroys everything in its path. Its scars last generations. History has taught us this time and time again, both in the United States and countries around the world,” Cook added.

Earlier on Wednesday, the company was disabling Apple Pay on several websites that sell attire and items in support of white nationalists and hate groups, several tech news websites reported.

Reporting by Brendan O’Brien in Milwaukee; Editing by Toby Chopra