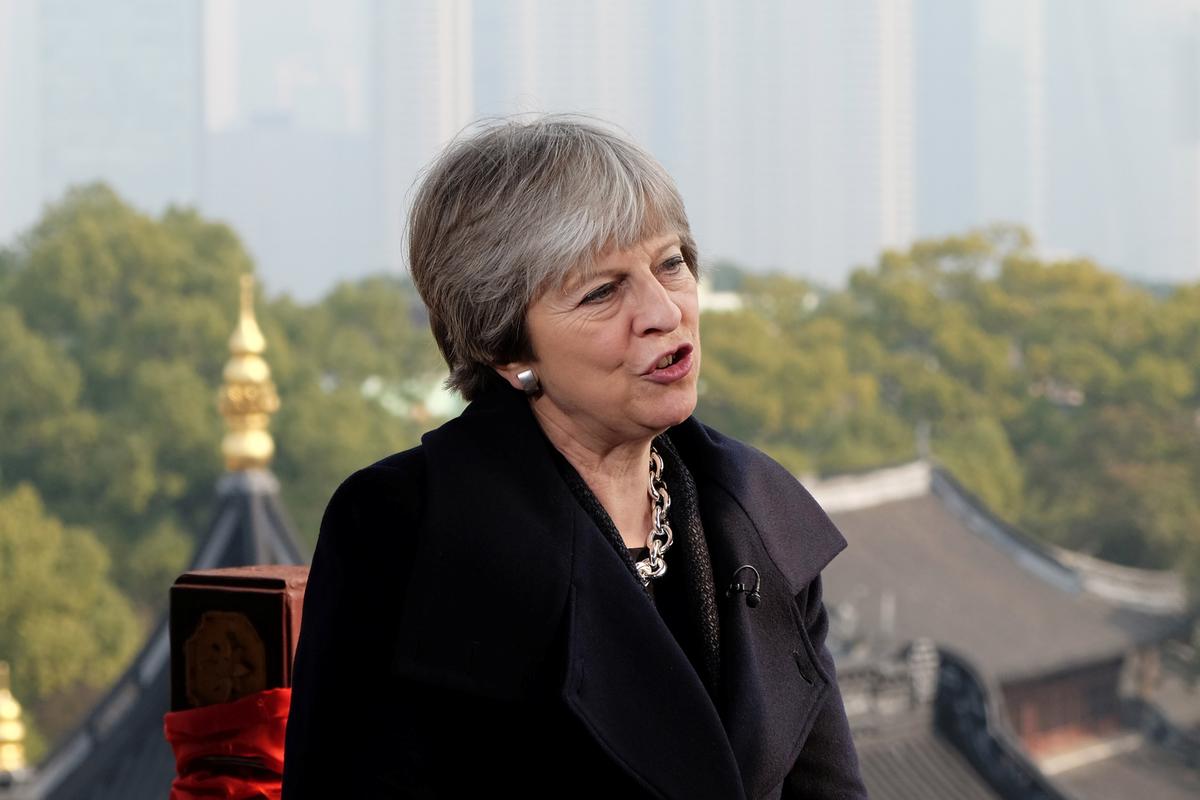 SHANGHAI/BEIJING (Reuters) – British Prime Minister Theresa May landed in China earlier this week fending off questions about her future amid mounting accusations of poor leadership, boring policies, and weakness over Brexit.

By Friday the 61-year old leader was basking in a warm reception from the leaders of world’s second-largest economy, while concerned Chinese citizens affectionately nicknamed her ‘Aunty May’ and worried if her legs were warm enough in the Beijing cold.

“What’s past is prologue,” said President Xi Jinping during his one-to-one meeting with May, quoting British playwright William Shakespeare to signal his hopes for strengthening ties.

The three-day trade visit has seen May earn assurances from China that Brexit will not affect the country’s enthusiasm for the so-called “golden era” of relations and a promise to open up Chinese markets to new British business.

While words will mean little if not backed up with action, and there are scant details about the headline announcement of 9 billion pounds of trade deals signed during the trip, the mood music for May’s visit pointed to a Chinese state seeking to rally support around her.

“Her political style is known for being pragmatic and strong and deft at decision making. She’s Britain’s Iron Lady,” said the Hubei Daily, an official regional newspaper, referring to the nickname of former British Prime Minister Margaret Thatcher.

There was no sign of a hangover from the 2016 diplomatic spat between the two nations caused by May’s decision to delay a part Chinese-funded nuclear plant over concerns about foreign investment in key British infrastructure.

“China really respects Britain,” said the influential Global Times tabloid – the same newspaper which in 2013 dismissed Britain as “just an old European country apt for travel and study” in a scathing editorial during a visit by May’s predecessor David Cameron, who had infuriated China by meeting the Dalai Lama.

One Chinese official remarked dryly to Reuters: “Nobody would call him Uncle Cameron”.

Asked by Chinese state television about her new moniker – a common Chinese term of endearment for respected women – May said she was honoured, and her officials were privately thrilled that the name had stuck.

By contrast, the front page of this week’s Spectator, a British political magazine, reads “Lead or go”, above a stark, unflattering cartoon of May, hunched and bow-legged.

But, Britain is not the only state looking to woo China.

Diplomatic sources say while China has expressed concern about Brexit, it has also been reassured by messages that Britain’s door is wide open to Chinese investment – a marked contrast to the suspicious reception Chinese companies have recently received in Germany.

May brought up awkward issues like democracy in Hong Kong, human rights and ethical concerns about Xi’s Belt and Road initiative, but was praised as “pragmatic” by the Global Times for not pressing the issue in public.

“For the prime minister, the losses outweigh the gains if she appeases the British media at the cost of the visit’s friendly atmosphere,” the paper wrote in an editorial on Friday.

On Chinese social media, concern about May’s visit focussed on less weighty issues – like whether her exposed legs were warm enough after a photograph of her with husband Phillip inside Beijing’s Forbidden City.

“Theresa, you really know how to stand up to the cold,” wrote one of over 17,000 users to comment on her official Chinese-language Weibo account.