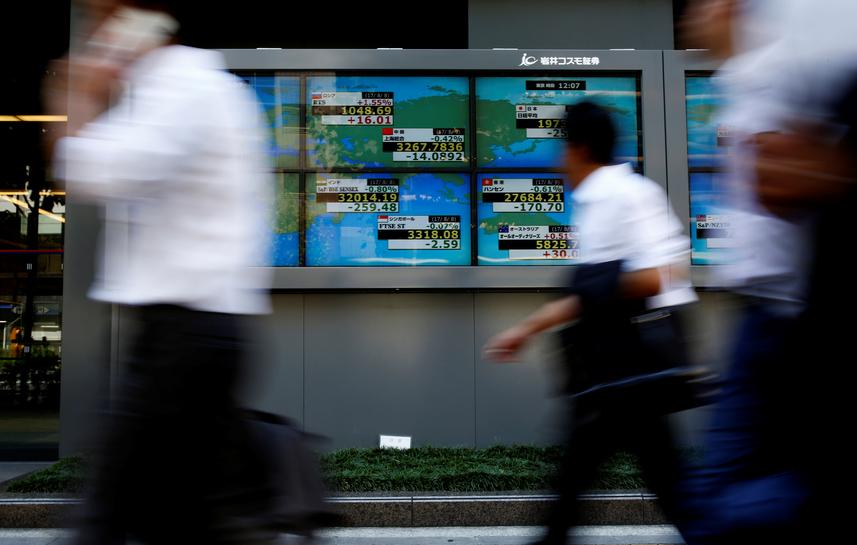 TOKYO (Reuters) – Asian stocks edged higher on Wednesday to extend a global rally spurred by gains for tech shares on Wall Street and miners in Europe, while the dollar was buoyant against the euro and yen ahead of a meeting of central bankers later in the week.

Financial markets have been buffeted in recent weeks by heightened tensions on the Korean peninsula, turmoil in the White House and growing doubts about President Donald Trump’s ability to fulfill his economic agenda.

Stocks, however, continue to attract buyers in an environment where bond yields remain relatively low and companies have largely notched up strong earnings.

European stocks had also risen overnight, supported by upbeat results from miners and a weaker euro.

MSCI’s broadest index of Asia-Pacific shares outside Japan .MIAPJ0000PUS was up 0.1 percent.

“The return of bargain hunters after a shallow correction in US markets again demonstrates that investors are reluctant to reduce exposure to equity markets given low bond yields, solid profit growth and a lower US$,” said Ric Spooner, chief market analyst at CMC Markets in Sydney.

“In a situation where earnings yields on stocks remain attractive in relation to bond yields, investors are reluctant to respond too negatively to “risk events” unless they represent a clear and present short term danger.”

Japan’s Nikkei .N225 rose 0.8 percent, lifted as the dollar strengthened against the yen.

The dollar was 0.2 percent higher at 109.750 yen JPY=, putting some distance between a four-month low of 108.605 plumbed last week, when turmoil in the White House and geopolitical tensions took a toll on the greenback.

“The dollar had been caught in a downtrend amid ebbing expectations towards U.S. inflation. It requires a surge in U.S. shares to break this pattern and that is what happened as Wall Street rallied,” said Junichi Ishikawa, senior FX strategist at IG Securities in Tokyo.

The dollar also drew support as U.S. Treasury yields rose and pulled away from two-month lows as some of the risk aversion that gripped the broader markets last week began to ebb.

The dollar index against a basket of six major currencies was little changed at 93.514 .DXY after rising 0.5 percent the previous day.

The euro was steady at $1.1762 EUR= after slipping about 0.5 percent overnight following weaker-than-expected German investor confidence.

A gathering of global central bankers on Friday in Jackson Hole, Wyoming has also prompted investors to rebalance their currency positions ahead of the event, leading them to reduce some of their short dollar bets.

Speeches from Fed Chair Janet Yellen and European Central Bank President Mario Draghi will headline the event, although neither are is expected to announce any significant policy messages.

In commodities, U.S. crude futures CLc1 slipped 0.3 percent to $47.69 a barrel after data from the American Petroleum Institute showed a crude stockpile decline largely in line with expectations and a surprise build in gasoline inventories.

Copper retreated from a three-year high, and other base metals also fell or trimmed gains, as speculators and funds locked in some profits after a steep rally.

Copper on the London Metal Exchange CMCU3 was little changed at $6,593.00 per tonne after striking $6,649 on Tuesday, the highest since November 2014.

Spot gold XAU= was down 0.1 percent at $1,282.80 an ounce, extending overnight losses as the precious metal felt pressure from a stronger dollar. Spot gold had reached a nine-month high above $1,300.00 an ounce on Friday.