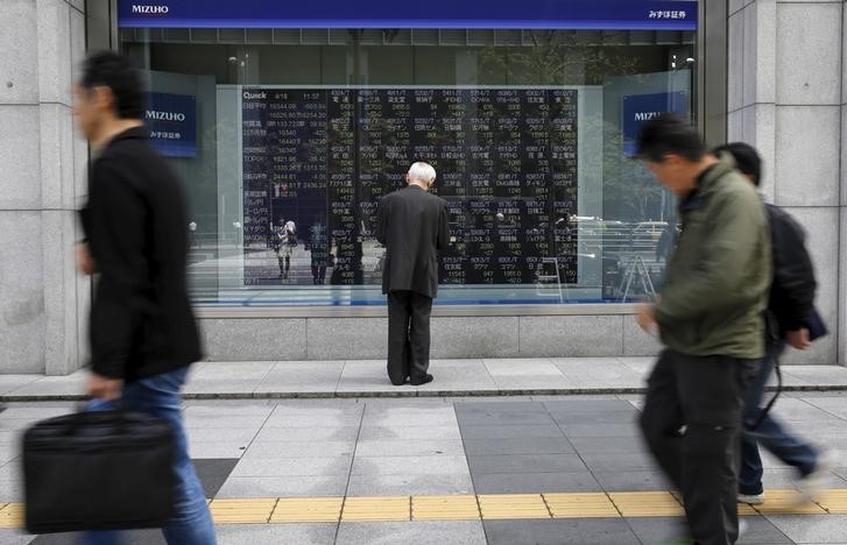 SINGAPORE Most Asian stock markets fell on Thursday after minutes from the Federal Reserve’s last meeting showed a lack of consensus on the future pace of U.S. interest rate increases, while oil prices inched higher following a steep decline a day earlier.

MSCI’s broadest index of Asia-Pacific shares outside Japan was down 0.2 percent. Japan’s Nikkei slipped 0.3 percent as a stronger yen depressed the outlook for export earnings.

Trading in Asia has been buffeted this week by tensions on the Korean peninsula after North Korea fired a missile, which U.S. officials concluded was an intercontinental ballistic missile, into Japanese waters.

The United States said on Wednesday it was ready to use force if needed to stop North Korea’s nuclear missile program but said it preferred global diplomatic action against Pyongyang.

The Nasdaq closed up 0.7 percent on Wednesday as technology shares recovered. But the Dow Jones Industrial Average was flat and the S&P 500 gained just 0.15 percent.

Fed policymakers were increasingly split on the outlook for inflation and how it might affect the future pace of interest rate rises, according to minutes released on Wednesday of the central bank’s June 13-14 policy meeting.

Several officials also wanted to announce a start to the process of reducing the Fed’s large portfolio of Treasury bonds and mortgage-backed securities by the end of August, but others preferred to wait until later in the year.

“With the mixed tone from the minutes and the essential delay to the announcement of balance sheet reduction timing, there is no surprise why we are seeing the muted reaction from the markets,” Jingyi Pan, market strategist at IG in Singapore, wrote in a note.

The dollar retreated 0.2 percent to 113.045 yen on Thursday. The dollar index, which tracks the currency against a basket of trade-weighted peers, was little changed at 96.294.

“The minutes from the June 13-14 FOMC meeting underscore that the start of the balance sheet reduction is on course for this year,” Kathy Bostjancic, head of U.S. macro investor services at Oxford Economics, wrote in a note.

“On the interest rate front, we believe rising concerns that the slowdown in the inflation rate could be long-lasting will lead policymakers to forgo additional rate hikes this year and to only raise rates twice (total 50 basis points) in 2018.”

Markets are waiting for the release of U.S. non-farm payrolls data for June, due on Friday, for a steer on Fed policy.

The steep decline on Wednesday off the back of data showing rising OPEC exports. That snapped an eight-day winning streak for U.S. oil, the longest rally in more than five years.