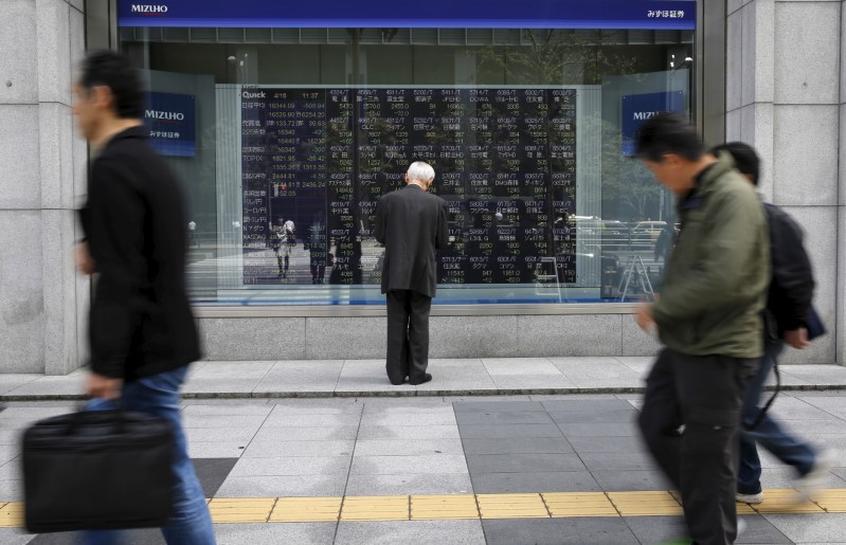 SYDNEY (Reuters) – Asian shares climbed on Monda, as technology stocks were bolstered by solid earnings from U.S. stalwarts and on strong pre-orders for Apple’s iPhone X, while oil hovered around a 2-year peak on concerns of tightening supplies.

A man looks at a stock quotation board outside a brokerage in Tokyo, Japan, April 18, 2016. REUTERS/Toru Hanai

European shares, however, were seen easing from five-month highs. London’s FTSE futures were off 0.4 percent, while S&P E-mini futures dipped 0.2 percent, suggesting a softer opening on Wall Street later in the day.

Apple Inc said pre-orders for the 10th anniversary iPhone X, which started on Friday, were “off the charts”, a blessing for Asian suppliers such as South Korea’s LG Display and Taiwan Semiconductor Manufacturing Company.

Tech stocks were the top gainers in MSCI’s broadest index of Asia-Pacific shares outside Japan, which was up 0.4 percent. Samsung Electronics led the charts with a rise of 1.8 percent.

Energy stocks did well too, with Brent crude at around $60.50 a barrel, its highest since July 2015, after Saudi Arabia agreed to support the extension of a global oil production cut agreement.

Japan’s Nikkei ended little changed but remained around its highest level since mid-1996, having soared 8 percent in October so far. But Chinese shares bucked the trend, with the Shanghai Composite Index set for its worst day since Aug. 11.

Global share markets have been on an uptrend since the start of the year, helped by solid corporate earnings and positive economic data across major countries.

“The continuation of quantitative easing (QE) in Europe at a time when Japan remains locked on QE and the U.S. is only tightening gradually highlights that global monetary conditions will remain easy for a long while yet,” said Shane Oliver, head of investment strategy at AMP Capital.

“This, along with strong economic growth and earnings, largely explains why global share markets are so strong.”

Amazon soared 13.2 percent on Friday and was responsible for the biggest boost to the S&P 500 after reporting a quarterly sales surge.

Apple is due to report on Thursday.

Major currencies kept to tight ranges in quiet trading in a week of interest rate decisions by the Bank of Japan, the Bank of England (BoE) and the U.S. Federal Reserve.

The dollar index was a 0.14 percent softer, with investors focused on the impending appointment of the next Federal Reserve chair, with speculation rife that Fed governor Jerome Powell is the favored candidate.

Markets see Powell as less hawkish, and wagers that he will be the chosen one tempered the dollar’s advances and dragged 2-year Treasury yields off a nine-year top. An announcement is expected this week.

In Europe, political uncertainty in Spain and the European Central Bank’s decision to extend its stimulus further weighed on the common currency, marking its biggest weekly loss of the year.

The premium that 2-year U.S. debt pays over 2-year German yields is now the widest since mid-1999, making it more attractive to borrow in euros to buy dollars.