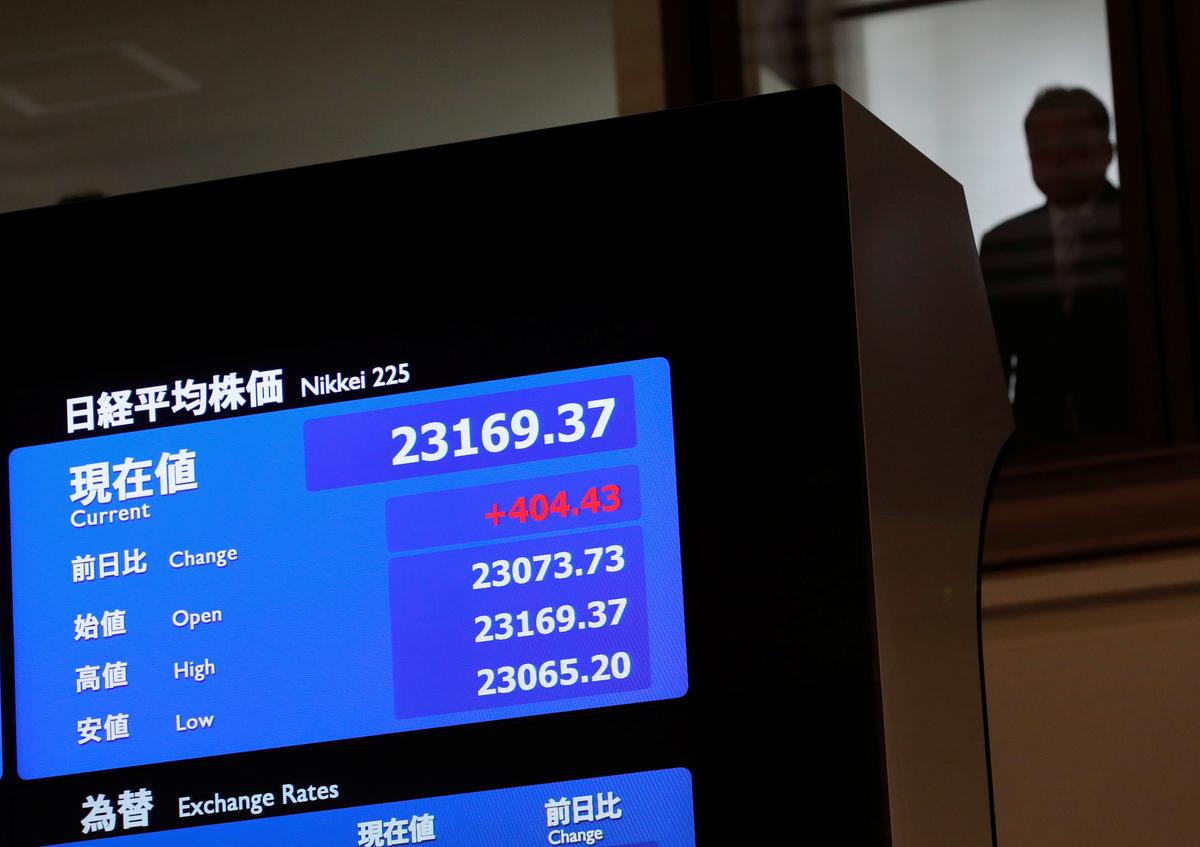 TOKYO (Reuters) – Asian stocks held near a record high on Thursday though concerns about the Trump administration’s protectionist stance cast a shadow on financial markets, while the dollar struggled after U.S. Treasury Secretary Steven Mnuchin welcomed a weaker currency.

MSCI’s broadest index of Asia-Pacific shares outside Japan was flat after hitting an all-time peak for the ninth session in a row.

Japan’s Nikkei fell 0.9 percent, hit by the dollar’s decline against the yen.

MSCI ACWI, the index provider’s broadest gauge of the world’s stock markets, boosted its gains for the month to 6.5 percent. It had registered declines only on two days this year amid optimism over an extended growth spurt in the global economy and solid earnings.

A Reuters poll of over 500 economists showed the global economy is expected to grow at the fastest pace since 2010.

The upbeat mood, however, has come up against renewed fears of protectionism after U.S. President Donald Trump’s decision to impose steep import tariffs on washing machines and solar panels earlier in the week.

U.S. Commerce Secretary Wilbur Ross, who attended the World Economic Forum in Davos, hinted at action against China, saying U.S. trade authorities were investigating whether there is a case for taking action over China’s infringements of intellectual property.

Trump is scheduled to speak in Davos on Thursday.

Also in the Swiss Alpine town, Mnuchin made a major departure from traditional U.S. currency policy on Wednesday, saying “obviously a weaker dollar is good for us as it relates to trade and opportunities.”

Analysts say they cannot remember any U.S. Treasury Secretary openly embracing a cheaper dollar at least in the last two decades or so.

“I was speculating the Trump administration may role out something with fanfare given its big delegation to Davos,” said Masayuki Kichikawa, chief macro strategist at Sumitomo Mitsui Asset Management.

“I’d think the real aim of Mnuchin’s comments on the dollar is not so much engineering a weaker dollar per se as putting pressure on trading partners to do some trade deals with the administration,” he added.

The dollar’s index against a basket of six major currencies tumbled to a three-year low of 88.946.

The euro rose to as high as $1.2439, a peak not scaled since December 2014, ahead of the European Central Bank’s policy meeting later in the day.

The meeting comes against a backdrop of heightened speculation over when it will end its vast stimulus and signal a rise in interest rates from record lows.

The dollar slipped to 108.92 yen, its lowest levels since mid-September.

The Chinese yuan also strengthened, gaining 0.5 percent to 6.3280 yuan per dollar in onshore trade, hitting its highest level since November 2015.

It rose 2.7 percent so far this month. The gains, if sustained, would mark the biggest monthly rise ever.