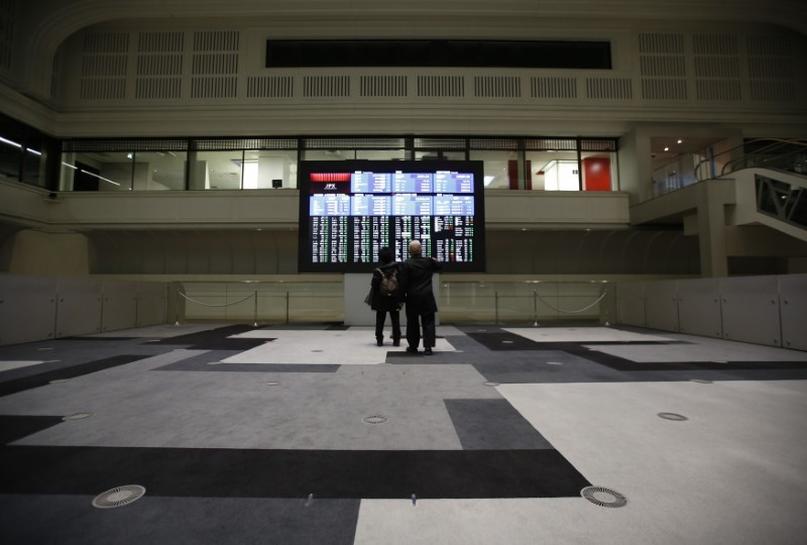 SINGAPORE (Reuters) – Asian stocks advanced on Friday, once again shrugging off a sluggish day on Wall Street, and the dollar strengthened as attention shifted to the central bankers’ symposium in Jackson Hole, Wyoming, that began on Thursday.

MSCI’s broadest index of Asia-Pacific shares outside Japan .MIAPJ0000PUS, was up 0.1 percent, set to end the week 1.4 percent higher.

In a post on Twitter, Trump said Congress could have avoided a legislative “mess” if it had heeded his advice on raising the amount of money the government can borrow, known as the debt ceiling.

That came after Trump said on Tuesday that he would be willing to risk a government shutdown to secure funding for a wall along the U.S.-Mexico border.

A late-September deadline looms for the United States to raise the its debt ceiling or risk defaulting on debt payments.

The MSCI World index .MIWD00000PUS was steady, heading for a 0.7 percent weekly gain.

The dollar fared better than U.S. stocks as investors turned their sights to the Jackson Hole central bankers’ meeting at which Federal Reserve Chair Janet Yellen and European Central Bank President Mario Draghi are due to speak on Friday, although no new policy messages are expected from either.

Yellen and Draghi will are scheduled to speak at 1400 and 1900 GMT respectively.

“Expectations for further rate hikes (by the Fed) this year have been tempered by the stubbornly low inflation with some Federal Reserve members calling for a halt to the rate hiking plan,” said William O’Loughlin, investment analyst at Rivkin in Sydney.

“Mario Draghi is also set to speak, with markets hoping he will reveal details of the ECB’s tapering plans.”

The dollar was also helped by fewer-than-expected U.S. initial jobless claims for the week ended Aug. 19.

The dollar was slightly stronger on Friday at 109.625 yen JPY=D4, extending Thursday’s 0.5 percent gain, and heading for a weekly rise of 0.4 percent.

Japanese core consumer prices rose for the seventh straight month in July, a sign the economy is making steady but painfully slow progress toward meeting the central bank’s 2 percent inflation target, although the increase was still largely driven by higher fuel bills.

The dollar index .DXY, which tracks the greenback against a basket of six major peers, was also slightly higher at 93.323. It is poised to end the week 0.1 percent lower.

In commodities, oil prices rose on Friday as production was shut down on expectations Tropical Storm Harvey would become a major hurricane when it reaches the Texas coast on Friday night or early on Saturday.

That came after crude prices fell overnight as some refiners shut down as Harvey crossed the Gulf of Mexico, reducing their short-term crude demand.

Global benchmark Brent LCOc1 advanced 0.5 percent to $52.40, after sliding 0.8 percent overnight, and is headed for a drop of 0.6 percent for the week.

Copper remained near a three-year high hit on Thursday on signs of stronger demand in top consumer China while inventories in London warehouses fell.

Benchmark copper on the London Metal Exchange CMCU3 inched up 0.2 percent to $6,700.50 a tonne, extending Thursday’s 1.9 percent gain and set to end the week up 3.3 percent.