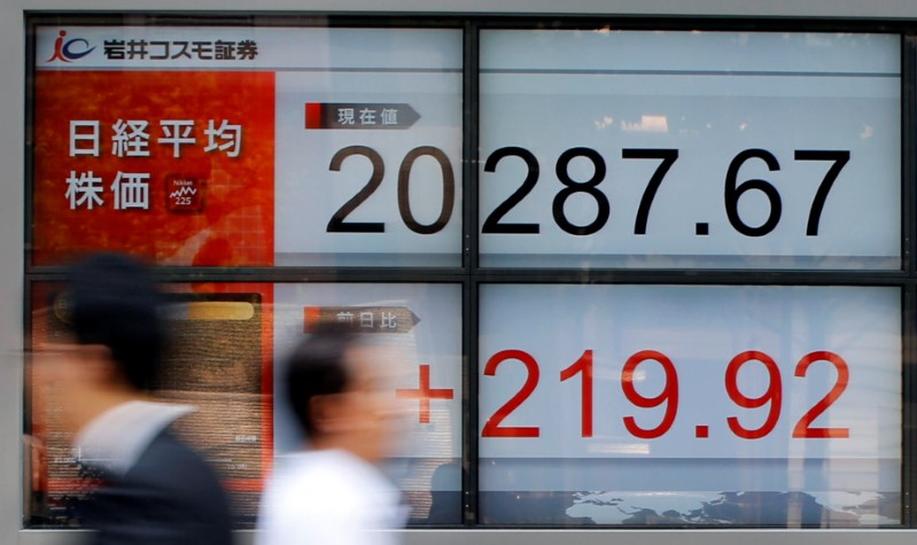 TOKYO (Reuters) – Asian shares stepped back from more than two-year highs on Tuesday while the dollar extended losses as passage of a U.S. healthcare bill grew doubtful, and as investors bet the Federal Reserve will be more cautious about raising interest rates.

MSCI’s broadest index of Asia-Pacific shares outside Japan fluttered between positive and negative territory and last was slightly higher. But it remained well shy of its loftiest levels since April 2015, scaled in the previous session.

Republican Senators Jerry Moran and Mike Lee announced their opposition on Monday to U.S. legislation to dismantle and replace the Affordable Care Act, commonly known as Obamacare, leaving it without enough votes to pass.

U.S. S&P stock futures edged down slightly after the news, and were last off 0.1 percent.

In Europe, futures for the Eurostoxx 50 and the DAX were both down 0.4 percent, while the FTSE was 0.3 percent lower.

Wall Street ended little changed on Monday in low-volume trading, as investors braced for a flood of second-quarter earnings reports later this week.

Overall Asian sentiment remained underpinned by solid China data on Monday, which showed its economy expanded at a faster-than-expected 6.9 percent clip in the second quarter, setting the country on course to comfortably meet its 2017 growth target.

Chinese shares on Tuesday faced profit-taking as well a sell-off in small-caps. Both the blue chip CSI300 index and the Shanghai Composite Index were down in the morning, then turned marginally up.

“At the end of this month, corporate China has to pay their tax bill, so you have people taking money off the table and liquidating,” said Gavin Parry, managing director at Parry International Trading Limited in Hong Kong.

The dollar, already down in early trade, extended losses. It slipped 0.5 percent on the day to 112.14 yen, well below its nearly four-month high of 114.495 touched last week.

The Australian dollar surged 1.5 percent to two-year highs after minutes of the last meeting of the country’s central bank showed policymakers turned more upbeat on the economic outlook.

The dollar index, which tracks the greenback against a basket of six major rivals, wallowed at 94.791, down 0.2 percent after plumbing its lowest levels since September 2016.

“It’s hard to be bullish on the dollar, both from the monetary side and from the U.S. politics side,” said Masafumi Yamamoto, chief currency strategist at Mizuho Securities.

Fading support for U.S. President Donald Trump was weighing on the dollar, he said, as the U.S. administration struggled to gather enough backers in the Senate to pass the healthcare reform bill, raising doubts about how the rest of its ambitious agenda would fare.

“Trump’s falling popularity, although it was not spectacular from the beginning, is another hurdle for pushing for the changes, and that will be negative for the U.S. economy and the dollar,” said Yamamoto.

Japan’s Nikkei stock index dropped 0.6 percent to end the day a hair below the key 20,000 level, as markets resumed trading after a public holiday on Monday and caught up to the resurgent yen.

“U.S. data is still not strong,” said Harumi Taguchi, principal economist at IHS Markit in Tokyo. The combination of that data and the political situation has pressured U.S. Treasury yields, which undermines the dollar, she said.

“We still expect the Fed to hike in December, but unless the market expects the same, I don’t think interest rate differentials are going to widen,” Taguchi said.

Crude oil futures edged higher, benefiting from the weaker dollar, with U.S. crude was slightly higher at $46.03 per barrel and Brent crude adding 0.1 percent to $48.46.

On Monday, crude prices had skidded about 1 percent as investors held out for strong indications that an OPEC-led effort to drain a glut was proving effective.