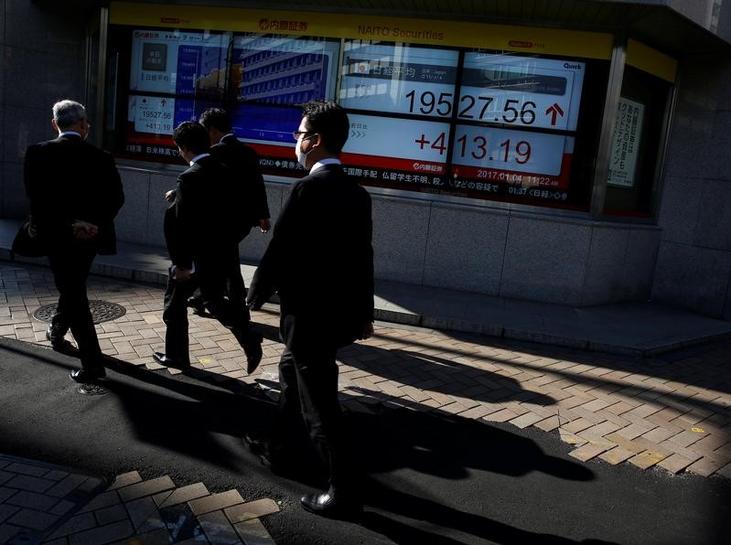 TOKYO (Reuters) – Asian shares ticked up in early Tuesday trade as investors looked to a barrage of economic data around the world to confirm recent signs the global economy is in robust health with inflation staying well contained.

On Wall Street, the Dow Jones Industrial Average .DJI rose 0.28 percent to end at a record high of 21,891.12 but the Nasdaq Composite .IXIC pulled back 0.42 percent after recent rallies.

MSCI ACWI .MIWD00000PUS, an index of the world’s 47 stock markets, logged its ninth consecutive month of gains in July on the back of expectations of solid global economic growth.

On the other hand, softening U.S. inflation in recent months prompted investors to bet the Federal Reserve will adopt a patient approach to further interest rate increases.

As a result, the CBOE volatility index .VIX, which measures implied volatility of stocks and is often seen as investors’ fear gauge, stood near record low levels hit last week.

“The low level of the Vix is a testament that investors expect ‘goldilocks markets’ to continue,” said Shuji Shirota, head of macro economic strategy group at HSBC in Tokyo.

“Under such an environment, the dollar, which is a safe-haven asset, will continue to decline,” he added.

Indeed, besides the United States, recent data from other parts of the world suggest a ‘goldilocks’ scenario where growth is fast enough to create jobs but not so rapid that it would lead to runaway inflation.

A raft of economic data is due on Tuesday, starting with Chinese manufacturing survey due at 9:45 a.m. local time (0145 GMT).

That will be followed by preliminary flash estimates of euro zone gross domestic product at 0900 GMT and U.S. spending and manufacturing data, due at 1230 GMT and 1400 GMT respectively.

It has gained almost 15 percent from its January 3 low of $1.0340, which was its weakest level since January 2003, on rising expectations that the European Central Bank will taper its stimulus next year.

The Australian dollar held steady at $0.8000 AUD=D4 ahead of the Reserve Bank of Australia’s policy announcement later in the day. The RBA is widely expected to keep interest rates on hold.

The firing of U.S. President Donald Trump’s communications director, Anthony Scaramucci, on Monday over an obscene tirade, just over a week after naming him to the job, also cemented the perception of a White house in disarray, further dragging on the dollar.

Oil prices rose to two-month highs on Monday, on expectations of U.S. sanctions against Venezuela’s oil sector after Sunday’s election of a constitutional super-body in Caracas, which Washington denounced as a “sham” vote.