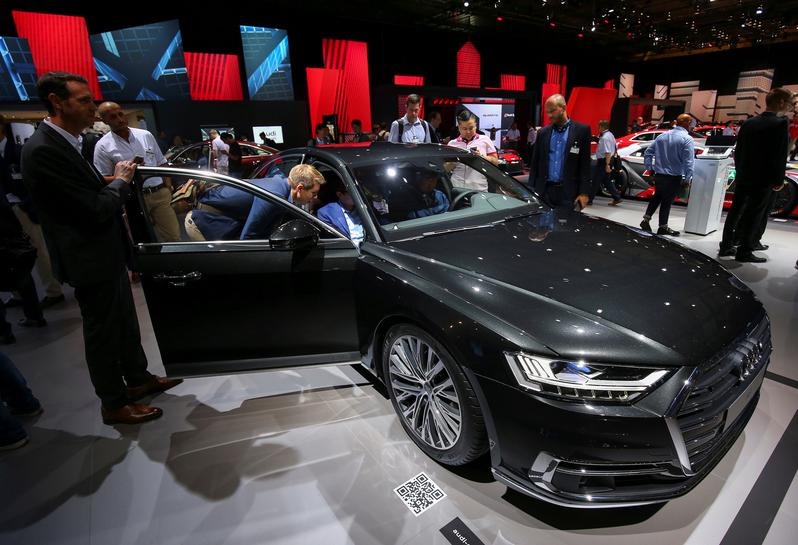 BARCELONA Battered by its emissions scandal, Audi launched its latest technology-packed A8 luxury saloon on Tuesday, aimed at overtaking rivals Mercedes-Benz and BMW as it struggles to overcome its biggest-ever corporate crisis.

Last week Munich prosecutors arrested an Audi employee in connection with “dieselgate”, the latest setback to Volkswagen’s (VOWG_p.DE) luxury car arm and main profit driver, after the German government a month earlier had accused Audi of cheating on emissions tests.

On Tuesday Audi shifted the focus back to its products with its top management hosting 2,000 guests in Barcelona to unveil the new A8, whose Level-3 self-driving technology enables the car to completely control driving at up to 60 kilometers (37 miles) per hour, beating the Mercedes S-Class and the BMW 7-Series.

Having slipped behind its two German rivals on global sales last year, Audi has risked stalling without innovation and needed a new prestige product, said Stefan Bratzel, head of the Center of Automotive Management think-tank near Cologne.

“Innovation is key in premium car-making,” Bratzel said. “The new A8 will polish the brand’s image and line-up at a critical time.”

Even Audi acknowledged that amid ongoing investigations, persistent pressure on its chief executive for his crisis management and analysts’ criticism of Audi’s ageing vehicle design, the new A8 creates an opportunity for a clean break.

Featuring a more distinctive design and a foot massager for rear-seat passengers, the new A8 heralds the start of a series of redesigns and new model launches at Audi including an electric sport-utility vehicle (SUV) to take on Tesla’s Model X, the all-new Q4 and Q8 SUVs and redesigned A6 and A7 model lines.

A source at Audi said development of the A8, which took about five years, suffered from changes at the brand’s research and development department, though assiduous work by division heads helped ensure that delays were kept in check. The A8 will reach German dealerships in the fourth quarter.

Audi is on its third development chief since dieselgate broke in late 2015, with Mertens, who took office in May, the brand’s fifth R&D boss since 2012.

“The top brass at VW group and Audi are so preoccupied with the diesel issue that the company’s management is lastingly distracted,” said Christian Strenger, a supervisory board member at Deutsche Bank’s retail asset management arm DWS.

With the new A8’s retail price up almost 8 percent on its predecessor at 90,600 euros ($103,000), Audi will also struggle to narrow the gap with its traditional rivals, research firm IHS Markit said.

S-Class and 7-Series prices start at 88,447 euros and 78,100 euros respectively, according to company data.