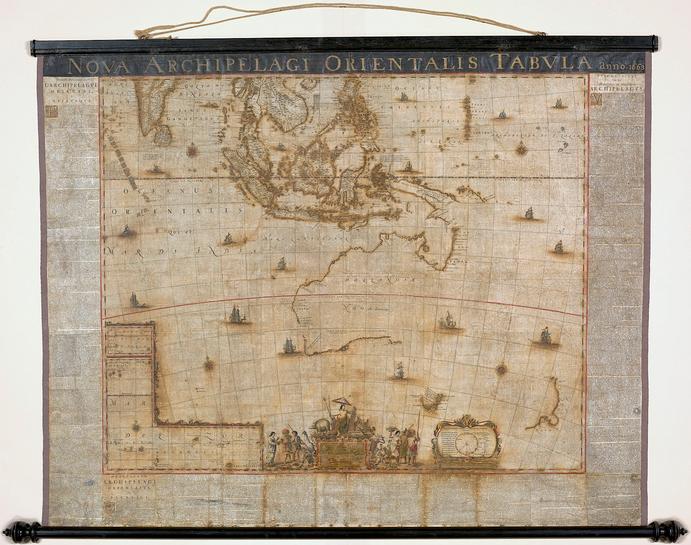 SYDNEY (Reuters) – A 17th century map of Australia, predating British settlement, has gone on display for the first time after suffering extensive damage while purportedly housed for hundreds of years in a Swedish warehouse.

A supplied image taken on July 4, 2017 shows the restored version of a rare 17th-century map, coined the “birth certificate of New Holland” and created by Joan Blaeu, chief cartographer for the Dutch East India Company in 1663, that documents Australia prior to the arrival of the British. Australian National Library/Handout via REUTERS

The map, which was once so fragile restoration experts refrained from even breathing on it, is one of just two known wall maps of Australia to have survived the 350 years since being created during the period of Dutch exploration and mapping.

It has gone on show at the “Birth certificate of New Holland” display at the new National Library of Australia in Canberra.

Created by Joan Blaeu, chief cartographer for the Dutch East India Company, in 1663, the map was displayed briefly in Australia in 2013 when staff did not dare breathe near it lest it crumbled to pieces.

National Library of Australia manager of preservation Denyl Cloughley said it took two and a half years to restore, including the removal of varnish which had corroded into a brown crust and was “literally eating away at the paper”.

A supplied image taken on May 23, 2013 shows the unrestored version of a rare 17th-century map, coined the “birth certificate of New Holland” and created by Joan Blaeu, chief cartographer for the Dutch East India Company in 1663, that documents Australia prior to the arrival of the British. Australian National Library/Handout via REUTERS

“It now gives us a good idea of what it would have looked like as it originally did – as you might see in the background of a Vermeer painting,” Cloughley said, referring to the 17th-century Dutch painter Johannes Vermeer.

The hanging map was bought by the Australian library in Canberra in 2013. The library said in a statement that the map was found in a Swedish warehouse in 2010 after it was thought to have spent most of its life stored away and forgotten.

It includes details of the first sighting of Australia’s southern island of Tasmania by the crew of Dutch explorer Abel Tasman in 1642.

A reduced version of the map was used by Captain James Cook, who claimed Australia for the British empire when he reached the east coast almost 130 years later.

“It is the first time Australia appears out of the ocean and as the focal point of a large map,” said Martin Woods, curator of maps at the National Library of Australia.

The map, called Archipelagus Orientalis, is constructed of nine individual copper plates, with letter-pressed text on the outside telling the story of Tasman’s voyages.

Reporting by Zalika Rizmal in SYDNEY. Editing by Jonathan Barrett and Nick Macfie