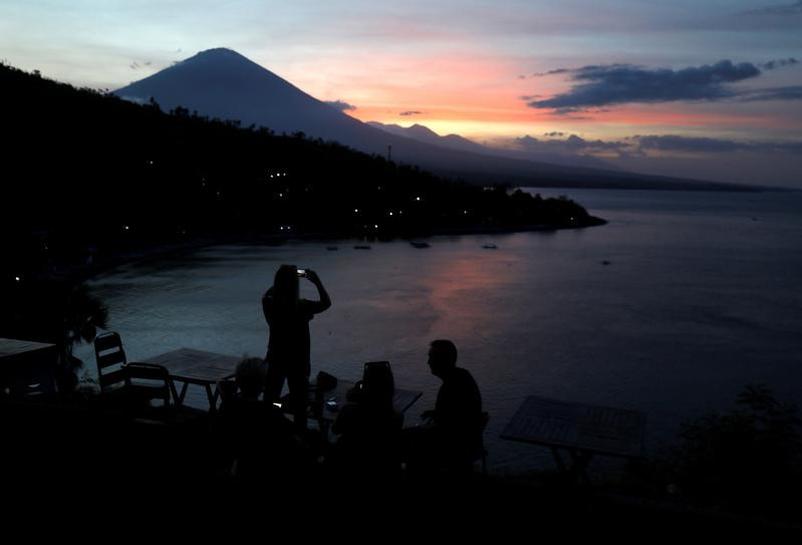 JAKARTA (Reuters) – Indonesia’s Mount Agung volcano on island of Bali erupted for a second time in less than a week on Saturday evening, sending a grey-black plume of ash and steam at least 1,500 meters into the sky and leading several airlines to change flight plans.

Mount Agung, a volcano on the highest alert level, is seen as tourists watch the sun set in Amed on the resort island of Bali, Indonesia October 1, 2017. REUTERS/Darren Whiteside

“Tourism in Bali is still safe, except in the danger (zone) around Mount Agung,” Indonesia’s Disaster Mitigation Agency said in a statement, referring to an area that extends to a radius of up to 7.5 km from the summit.

“There has not been an increase in seismic and volcanic activity after the (Tuesday) eruption and until this afternoon,” said the statement, noting that it had not changed its emergency status for Agung from level 3.

The agency also called for calm among the local community, from which around 25,000 people have been evacuated from the slopes of Agung to hundreds of refuge shelters.

The latest eruption had produced a bigger ash cloud than an initial eruption on Tuesday, it said. After that eruption, Singapore had updated its travel advisory for the island, warning that ash clouds could “severely disrupt air travel”.

J. A. Barata, a spokesman for Indonesia’s Transportation Ministry, said flights in and out of Bali remained “normal”.

“Tactical guidance for departure and arrival aircraft has been applied. This hasn’t endangered any flights,” he said.

However, several international flights, including from several cities in Australia and to the Netherlands and Malaysia, appeared to have been canceled and re-routed on Saturday night as a result of the eruption, the official website of Bali’s Ngurah Rai International Airport said.

These included flights operated by KLM, Qantas, AirAsia, and Virgin.

Bali, famous for its surf, beaches and temples, attracted nearly 5 million visitors last year, but business has slumped in areas around the volcano since September when Agung’s volcanic tremors began to increase.

Tourism, a cornerstone of Bali’s economy, is Indonesia’s fourth-biggest earner of foreign currency after natural resources such as coal and palm oil.

Agung towers over eastern Bali at a height of just over 3,000 meters. When it last erupted in 1963 it killed more than 1,000 people and razed several villages.

Indonesia has nearly 130 volcanoes, more than any other country. Many of them show high levels of activity but it can be months before an eruption.