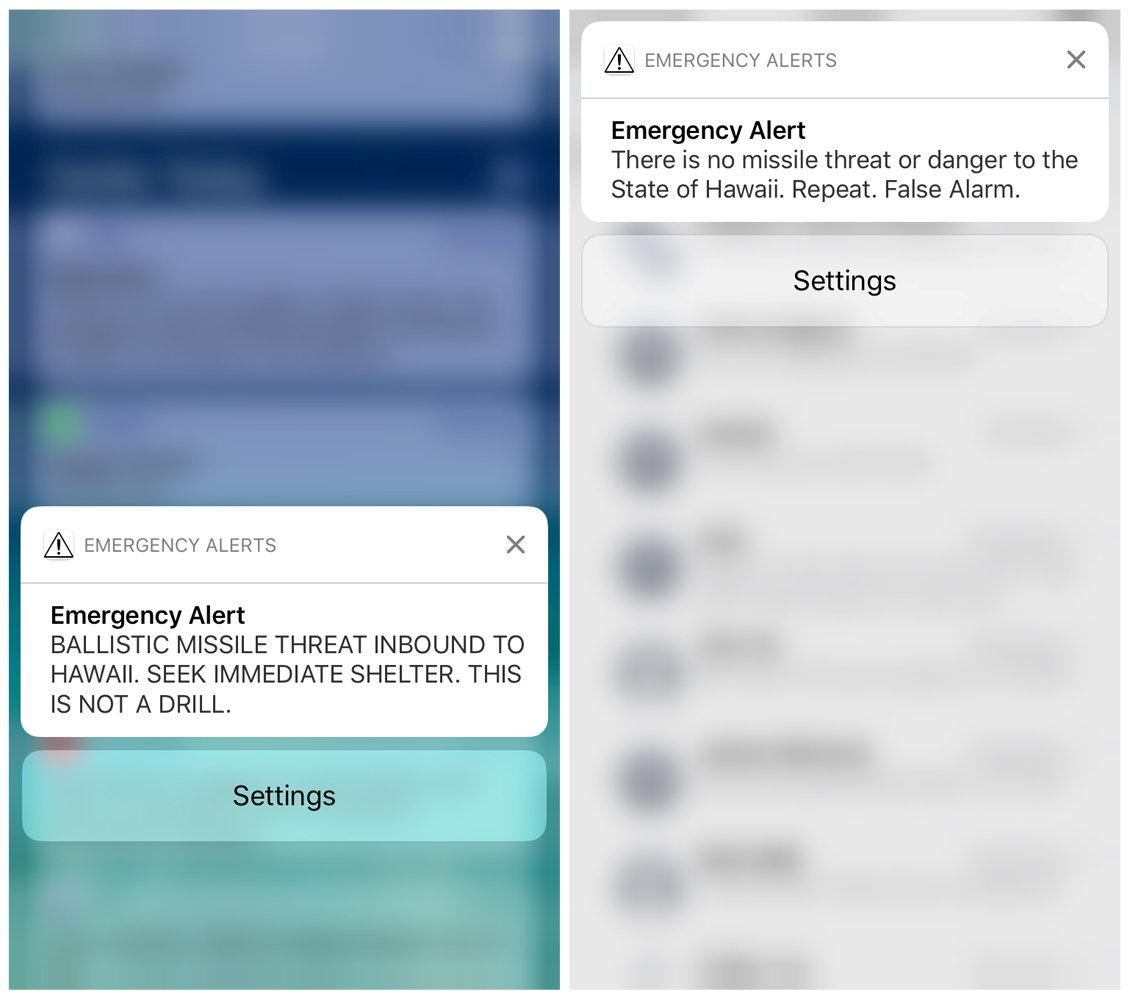 HONOLULU (Reuters) – An emergency alert was sent mistakenly on Saturday to Hawaii’s residents warning of an imminent ballistic missile attack when an employee at the state emergency management agency pushed the “wrong button,” Hawaii’s governor said.

State officials and the U.S. military’s Pacific Command confirmed that there was no actual threat to the state. The mistaken alert, which triggered panic among many Hawaiians who scrambled to find shelter, stated: “EMERGENCY ALERT BALLISTIC MISSILE THREAT INBOUND TO HAWAII. SEEK IMMEDIATE SHELTER. THIS IS NOT A DRILL.”

Governor David Ige, who apologized for the mistake, said in televised remarks that the alert was sent during a employee shift change at the Hawaii Emergency Management Agency. Vern Miyagi, the agency’s administrator, called it “human error.”

“It was a procedure that occurs at the change of shift where they go through to make sure that the system, that it’s working. And an employee pushed the wrong button,” the Democratic governor said, adding that such shift changes occur three times a day every day of the year.

The alert, sent to mobile phones and aired on television and radio, was issued amid high international tensions over North Korea’s development of ballistic nuclear weapons.

“I was awakened by the alert like everyone else here in the state of Hawaii. It was unfortunate and regrettable. We will be looking at how we can improve the procedures so it doesn’t happen again,” Ige added.

Miyagi said, “It was an inadvertent mistake. The change of shift is about three people. That should have been caught. … It should not have happened.”

The U.S. Federal Communications Commission, which has jurisdiction over the emergency alert system, announced it was initiating a full investigation. Earlier this week, FCC chairman Ajit Pai said the agency would vote at its January meeting to enhance the effectiveness of wireless emergency alerts, which have been in place since 2012.

Stacey Bow, 56, of Honolulu, said she was awakened to the emergency alert on her smart phone. She awakened her 16-year-old daughter with the news. “She became hysterical, crying, you know, just lost it,” she said.

Bow said of the person responsible for issuing the alert, “I imagine that person is clearing out their desk right now. You don’t get a do-over for something like that.”

A combination photograph shows screenshots from a cell phone displaying an alert for a ballistic missile launch and the subsequent false alarm message in Hawaii January 13, 2018. REUTERS/Hugh Gentry

Miyagi, the agency’s administrator, said there was a “check list” that should have been followed. He said, “I think we have the process in place. It’s an matter of executing the process.” He added, “This will not happen again.”

Media reports said it took 38 minutes for the initial alert to be corrected. The Emergency Management Agency eventually said on Twitter: “NO missile threat to Hawaii.”

Hawaii, a chain of islands in the Pacific Ocean, has a population of about 1.4 million people, according to the U.S. Census Bureau, and is home to Pacific Command, the Navy’s Pacific Fleet and other elements of the American military.

In November, Hawaii said it would resume monthly statewide testing of Cold War-era nuclear attack warning sirens for the first time in at least a quarter of a century, in preparation for a possible missile strike from North Korea.

Trump was wrapping up a round of golf at Trump International Golf Club in West Palm Beach, Florida when the incident was unfolding. White House spokeswoman Lindsay Walters said Trump was briefed and that it “was purely a state exercise.”

Hawaii State Representative Matt LoPresti, described his family’s reaction upon receiving the alert. “We took shelter immediately … in the bathtub with my children, saying our prayers,” LoPresti told CNN.

“I was wondering why we couldn’t hear the emergency sirens. I didn’t understand that. And that was my first clue that maybe something was wrong, whether a hack or an error. But we took it as seriously as a heart attack,” LoPresti added.

The false alarm, and the panic that ensued, could add to a growing sense of urgency within the Trump administration about what to do about the advancing nuclear threat from North Korea.

There are hawks within the Trump administration who believe the United States cannot live with a perpetual threat from North Korea and that U.S. military force could be necessary. The incident could also give fresh impetus to those who favor a peaceful resolution to the crisis. The U.S. military has warned that any conflict on the Korean peninsula would be devastating.

The U.S. Navy base at Pearl Harbor, Hawaii, was the target of the surprise attack by Japan on Dec. 7, 1941, that drew the United States into World War Two.