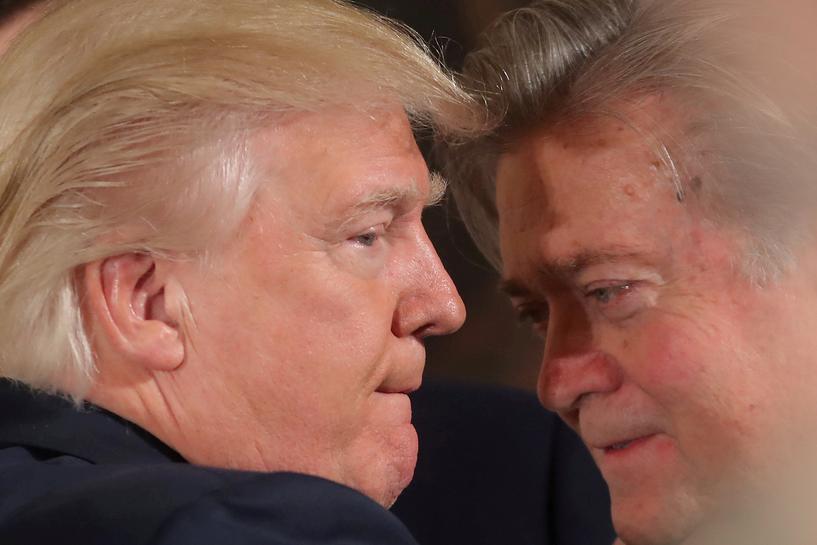 WASHINGTON/BRIDGEWATER, N.J. (Reuters) – President Donald Trump’s ouster of chief strategist Steve Bannon is unlikely to mark the abandonment of the administration’s “America First” agenda that has unnerved investors and trade partners and split the White House into nationalist and globalist camps.

Within hours of leaving Trump’s administration on Friday, Bannon was back at the helm of Breitbart News, the hard-right news site he ran before becoming the main architect of Trump’s 2016 presidential campaign.

Bannon can now do more to further conservative causes because “he can speak his mind” without the constraints of working in the White House, Rick Weatherly, 61, a maintenance technician from the Denver suburb of Lakewood, said on Saturday.

Trump appeared to agree, tweeting: “Steve Bannon will be a tough and smart new voice at @BreitbartNews … maybe even better than ever before. Fake News needs the competition!”

Bannon, 63, was instrumental in some of Trump’s most contentious policies including the travel ban on people from several Muslim-majority nations, departure from the Paris climate accord and rejection of the Trans-Pacific Partnership trade deal.

He was no friend to the Republican political establishment and was loathed by liberals, but became a darling of some of the president’s hard-line conservative supporters.

“Trump will now have a great external ally,” a source close to Bannon said on condition of anonymity. “He will use his big hammer against the congressional leadership in support of the president’s agenda.”

Trump supporters in south Florida, Chicago and Colorado told Reuters that they were not concerned that Bannon’s departure meant the president was distancing himself from policies he supported during last year’s campaign.

“I think Trump will be fine,” said Bob Janda, a 67-year-old small business owner in Chicago.

Nor is Bannon likely to be distanced from Trump’s ear, a White House official said on condition of anonymity.

Bannon joined a string of senior officials who have left the Trump administration in the past five weeks, leading to the appointment of retired Marine general John Kelly as the new White House chief of staff.

Kelly has succeeded in imposing some order on what had been a haphazard operation, but Bannon will still have “a direct pipeline into the Oval Office with Breitbart, Twitter and the TV,” the same White House official added.

“My guess is he’ll (Bannon) probably be more effective goading the president from outside, especially if the president feels boxed in by John Kelly’s clean lines of authority and (national security adviser H.R.) McMaster’s orderly processes,” said Kori Schake, a research fellow at Stanford University’s Hoover Institution who previously served in the White House.

“Seems to me that Bannon was symptom not cause: The president seems to share his dark vision, revel in the support of people Bannon represents,” Schake added.

Prior to joining the Trump campaign, Bannon had spearheaded Breitbart’s shift into a forum for the “alt-right,” a loose online confederation of neo-Nazis, white supremacists and anti-Semites.

His departure capped a tumultuous week in which Trump was widely criticized for saying both sides were responsible for last weekend’s violence at a Charlottesville, Virginia rally organized by neo-Nazis and white supremacists.

Bannon told the conservative Weekly Standard on Friday that he would use Breitbart to attack opponents of the populist and nationalist agenda he championed, including establishment Republicans.

At the same time he appeared to suggest that his departure signaled a major shift for the Trump agenda. “The Trump presidency that we fought for, and won, is over,” Bannon said.

Defense policy is one area where Bannon could play a role from the outside.

While many of Trump’s national security aides favor sending several thousand more troops to Afghanistan, where the Taliban insurgents have been regaining ground, Bannon argued for withdrawing the 8,400 U.S. personnel still there.

He also had advocated restraint in dealing with North Korea, rejecting the use of military force to solve the recent crisis.

“There is a danger that if he continues to bang away on issues that appeal to Breitbart’s audience but aren’t going anywhere, Bannon risks splitting the administration’s loose coalition of hard-right ideologues, traditional conservatives, and middle-of-the-road voters who didn’t like Hillary Clinton,” another Trump administration official said, also on condition of anonymity.