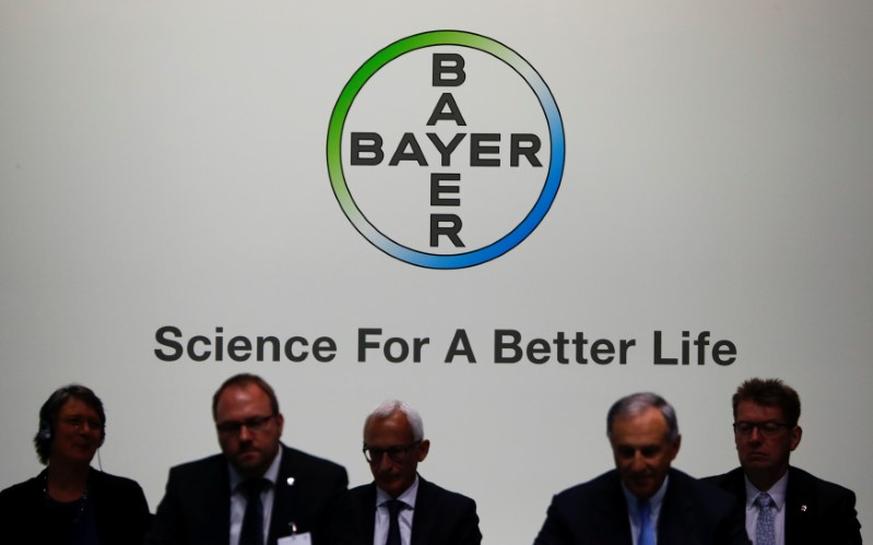 LONDON (Reuters) – Bayer is weighing legal action and Novartis has expressed concern at plans by doctors in the north of England to defy official guidance by using a cancer medicine as a cheap eye drug.

FILE PHOTO: Members of the supervisory board of German pharmaceutical and chemical maker Bayer AG are silhouetted against the company’s logo at the annual general shareholders meeting in Bonn, Germany, April 28, 2017. REUTERS/Wolfgang Rattay

Doctors from 12 clinical commissioning groups (CCG) plan to make Roche’s cancer therapy Avastin the preferred option for wet age-related macular degeneration (AMD), even though it is not licensed for this use.

AMD, which occurs when the macula is unable to function properly, is a common cause of sight loss.

David Hambleton, head of the South Tyneside CCG, said the policy of using Avastin rather than Bayer’s Eylea or Novartis’s Lucentis could save the regional National Health Service (NHS) 13.5 million pounds ($18 million) a year.

“Clinical safety and effectiveness are paramount but, as the legal guardians of finite NHS resources, we commissioners also have a duty to act efficiently, effectively, and economically,” he wrote in the British Medical Journal on Wednesday.

“This is one choice that is morally, ethically palatable.”

Across England, savings from using Avastin could total more than 500 million pounds, the journal reported.

The new policy from the North East and North Cumbria CCG Forum means doctors will tell patients that Avastin is the preferred choice, although they are still free to choose Eylea or Lucentis if they want.

However, doctors prescribing Avastin for AMD will be using the medicine “off label”, which goes against guidance from the General Medical Council that a licensed product should be used when available.

While Avastin works in a similar way to Eylea and Lucentis, for a fraction of the price, Bayer and Novartis said it had not undergone the same rigorous regulatory scrutiny for use in AMD as their products.

“Bayer feels it has to act to challenge the decision taken by these CCGs. Bayer is currently considering its position including the possibility of legal proceedings,” the German company said in an emailed statement.

Novartis said the move was “not in line with the current UK and EU legal and regulatory framework”.

The issue of whether Avastin should be used as a cheap alternative in AMD has long been controversial in Europe. In 2014 in Italy, Roche and Novartis were accused of collusion in trying to impose the use of Lucentis in AMD – a charge the two companies denied.