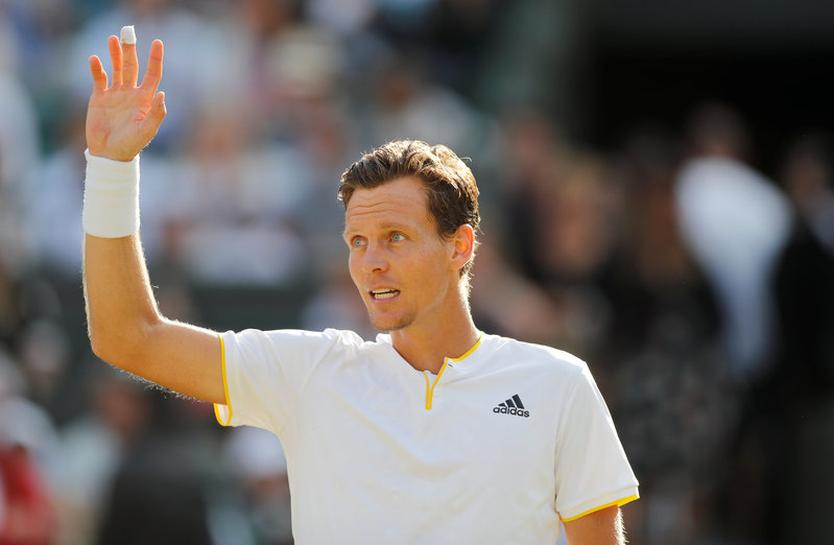 (Reuters) – Tomas Berdych ended a dismal losing streak against Novak Djokovic on Wednesday, albeit only when his rival retired hurt in their Wimbledon quarter-final, but now faces Roger Federer, who he hailed as the “greatest of them all”.

The Czech 11th seed was leading by a set and a break of serve when second seed Djokovic withdrew due to an elbow injury [nL4N1K34ST]. The match ended Berdych’s run of 12 straight losses against the Serb during which he won two sets in total.

He had not beaten the 12-times grand slam winner since 2013, and had won just twice in 27 matches.

But now the 31-year-old is through to his second successive Wimbledon semi-final, where he will go up against seven-times champion Federer. However, he said he was no more daunted by the Swiss master than he was by Djokovic.

“No matter if it’s Roger or if it’s Novak, or a guy in the first round, what’s most important is myself, my game, belief in what I’m doing,” he said. “I just need to go out there and play my best.”

He did, though, acknowledge the scale of the task he faced.

“It’s a really exceptional tennis player that we have, that our sport has right now,” he said of third-seeded Federer.

“There was nobody better in the past – I think he’s the greatest of them all. It’s a great challenge to have the opportunity to play him.”

Berdych has never won a grand slam, although he was Wimbledon runner-up in 2010 when he lost to Rafael Nadal.

He has reached seven grand slam semi-finals – second only to Ivan Lendl among Czech men.

But asked if received the kind of recognition at home that he might get if he were from another country, he said: “I’m not aware of any stadium or statue with my name on in the Czech Republic. All nations are very different. What else I can say?”