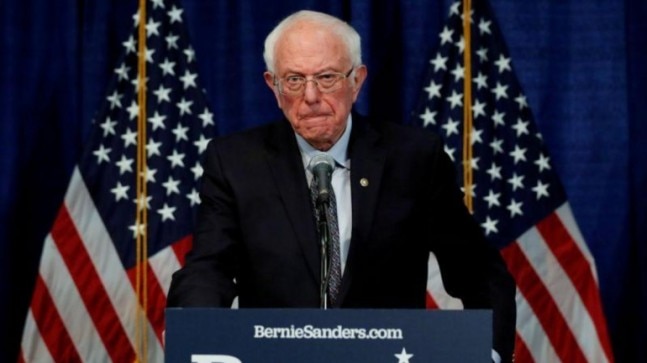 Senator Bernie Sanders on Wednesday dropped out of the White House race, paving the way for former vice president Joe Biden to become the presumptive nominee of the Democratic party and take on President Donald Trump in November presidential elections.

“Today I am suspending my campaign. But while the campaign ends, the struggle for justice continues on,” Sanders, 78, said.

The announcement from the Vermont Senator was expected as he had not done well in the recent Democratic primaries against Biden, 77, who has now taken a substantial lead over him after winning a series of key Democratic presidential primaries.

Sanders is scheduled to address his supporters shortly.

“Sanders’s withdrawal from the race concludes a quest for the White House that began five years ago in relative obscurity but ultimately elevated him as a champion of the working class, a standard-bearer of American liberalism and the leader of a self-styled political revolution,” The New York Times commented.

Reacting to the development, President Trump thanked Senator Elizabeth Warren for Sanders dropping out of the presidential race.

“Bernie Sanders is OUT! Thank you to Elizabeth Warren. If not for her, Bernie would have won almost every state on Super Tuesday! This ended just like the Democrats & the DNC wanted, same as the Crooked Hillary fiasco. The Bernie people should come to the Republican Party, TRADE!” he said in a tweet.

“Wow, Bernie is unwilling to give up his delegates, and wants more of them! What’s that all about? Can’t see AOC plus 3 supporting Sleepy Joe!” Trump said in separate tweets, taking a jibe at Biden.

Meanwhile, Biden also took to Twitter and said: “Together we will defeat Donald Trump. But we will also address the climate crisis. We will make college affordable. And we will make health care available to all. We will not just rebuild this nation – we’ll transform it. And I’m asking you to join me.

“And to Bernie’s supporters: I know that I need to earn your votes. And I know that might take time. But I want you to know that I see you, I hear you, and I understand the urgency of this moment. I hope you’ll join us. You’re more than welcome: You’re needed”.