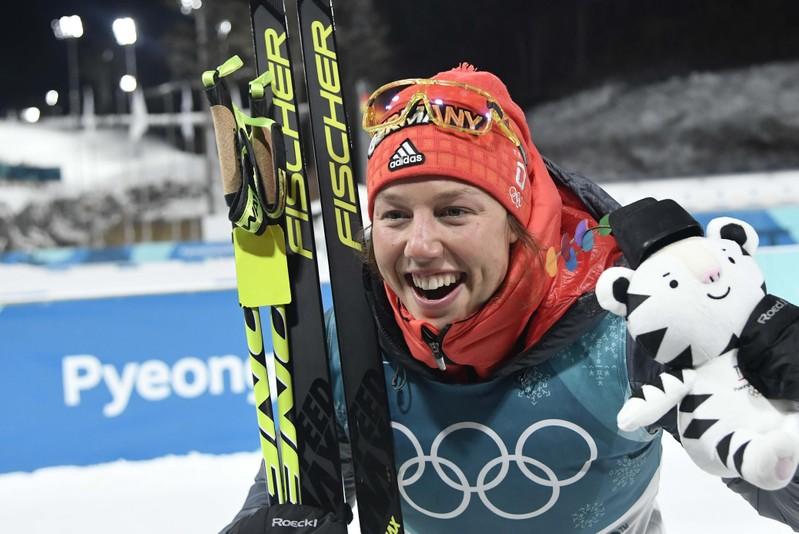 PYEONGCHANG, South Korea (Reuters) – Germany’s Laura Dahlmeier held her nerve in the howling wind, putting in an almost flawless shooting performance to win the women’s 10km biathlon pursuit in a time of 30.35 minutes on Monday and claim her second gold of the Pyeongchang Olympics.

The victory made Dahlmeier the first female biathlete to win the sprint and pursuit double at the same Olympics.

“It feels really great, it’s amazing. I don’t know what to say because I felt really, really tired before the race and also during the race in the first laps. I just tried to stay focused and now I‘m here again,” Dahlmeier told reporters.

In a thrilling battle for silver, Anastasiya Kuzmina of Slovakia edged out France’s Anais Bescond in a sprint finish to come home 29.4 seconds behind Dahlmeier.

With the racers starting based on where they finished in the sprint, Dahlmeier began with a 24-second advantage.

The 24-year-old German, who won five golds at the 2017 world championships, needed all the calm she could muster as Kuzmina, who is second in the World Cup rankings, burst out of the pack to mount an early challenge.

Dahlmeier was not intimidated, however, keeping her nerve as the two arrived at the same time for the third shoot and stood side by side on the range. She hit all five targets as Kuzmina had two misses that ended her gold medal chances.

Dahlmeier made the most of it, skating away from her rival to open up an unassailable lead, stopping only to fire off a final salvo of five perfect shots before cruising to victory.

“At the range I felt really comfortable, I know I have good standing shooting, so I looked to my targets, I wanted to hit the middle and it worked,” Dahlmeier said.

“It’s the same in any pressure race because you have to stay focused on your own targets and I think I am a little bit of a master of perseverance.”

Kuzmina’s costly miss almost came back to haunt her as Bescond battled her all the way for the silver medal, but the Slovakian managed to slide a ski across the line first to take second place by two tenths of a second.

After Dahlmeier’s five world championship golds and two wins in Pyeongchang, her rivals know only too well how tough she is to beat.

“Laura dominates our sport, there are a lot of strong athletes out there. We need to shoot better and ski faster, that’s it,” Bescond said.