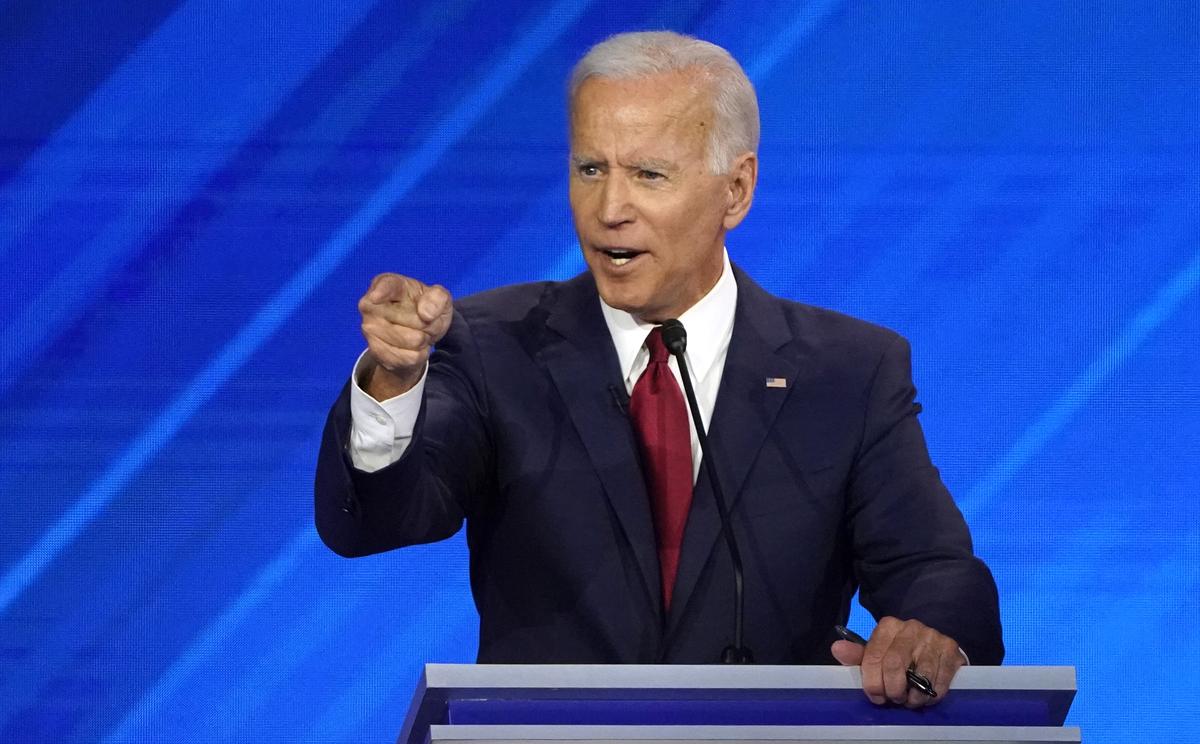 WASHINGTON (Reuters) – Those expecting Joe Biden’s presidential candidacy to flame out any day now will have to keep waiting.

The former U.S. vice president survived another Democratic debate on Thursday largely unbloodied and unbowed, leaving those on the margins of the race for the party’s 2020 nomination wondering if their time to gain ground on the front-runner is running out.

If anything, the third Democratic debate in Houston was notable for how few of the nine other candidates took hard swings at Biden, a marked contrast from earlier debates when his record was more directly challenged.

The evening likely left the race fairly much as it was before the debate, with Biden holding a sizeable, but not overwhelming lead over U.S. Senators Bernie Sanders and Elizabeth Warren.

None of the other 17 Democratic presidential candidates seeking the chance to battle Republican President Donald Trump in the November 2020 election have more than 4% support, according to the latest Reuters/Ipsos poll released on Wednesday.

Biden seemed more vulnerable than ever coming into the debate, facing persistent questions about his age, verbal slip-ups and performance on the campaign trail.

But on Thursday, his resilience and forceful defense of his record as a U.S. senator and No. 2 to former President Barack Obama left wide open the question of who else in the field might rise to shake up the race.

“Most had a decent night, but the front-runners are still the front-runners,” said Leah Daughtry, a Democratic strategist in South Carolina, a critical early voting state in next year’s nominating contests.

It was the first time Warren was on a debate stage with Biden and the matchup between the old-school Democratic centrist and the spirited progressive senator from Massachusetts was widely anticipated.

Yet it produced no fireworks, as Warren stuck to her pattern of not criticizing other Democrats.

More fortunate for the 76-year-old Biden: Aside from a few slips of the tongue, he provided little ammunition for those who argue he is too old or too out of step to be the party’s nominee.

Rather, most of the candidates stressed party unity and worried aloud about not appearing divided in front of the American people, a shift from earlier debates where intraparty conflict was the story.

When Biden’s rivals on stage did go on the attack, their attempts largely backfired. Most notable was a guided missile fired by Julian Castro, the U.S. housing secretary under Obama, who worked hard to portray Biden as past his prime.

Castro, 44, alleged Biden was “forgetting” something he had said a few minutes earlier and then followed it up by charging that he, not Biden, was the better steward of Obama’s legacy, resulting in audible gasps from the large crowd in attendance.

As it turned out, Castro was incorrect about what Biden had said earlier.

Biden’s advisers criticized Castro for what they called a “cheap shot” and argued that Castro had not learned the lesson of the first two debates – attacking Biden does not pay off.

“Castro went too far, tone-wise,” said Delacey Skinner, a Democratic strategist in Washington who is unaffiliated with a campaign. “The jab at Biden’s age was cringeworthy.”

Even U.S. Senator Amy Klobuchar of Minnesota, a candidate on stage with Biden, told ABC News afterward that Castro’s attack was “so personal and so unnecessary.”

Asked afterward about the charge he had taken a cheap shot, Castro told MSNBC: “I completely disagree,” and said he was not suggesting Biden was too old but seeking to highlight their policy differences on healthcare.

Biden was helped as well by several candidates paying homage to Obama’s record, which reinforced Biden’s long-standing argument that he is best positioned to build on the former president’s achievements and reverse Trump’s policies.

Biden himself seized on Obama’s popularity with Democrats early on, by suggesting that Warren lined up with Sanders, a self-described socialist, on policy issues, while he mirrored Obama.

In doing so, Biden drew a sharp distinction between himself and his two closest challengers. “The senator says she’s for Bernie,” Biden said. “Well, I’m for Barack.”

Skinner said another candidate who probably helped himself the most on Thursday was Beto O’Rourke, the former Texas congressman who has refashioned his campaign persona in the aftermath of last month’s shootings in his hometown of El Paso that killed 22.

O’Rourke, who has made gun control his animating issue, vowed unequivocally to call for an assault weapons ban if elected president in a statement that quickly went viral on social media.

“I think he’ll generate some buzz out of this performance,” Skinner said. “The question will be whether or not he can capitalize on it and sustain it.”

The good news for the lesser candidates on the stage on Thursday is that all of them have already qualified for the October debate, where they will be joined by at least one other contender.

That should ensure the debates will again be split into two evenings, but this time in smaller groups, which may give the candidates more time to make their case to an electorate that, to date, has largely ignored them.