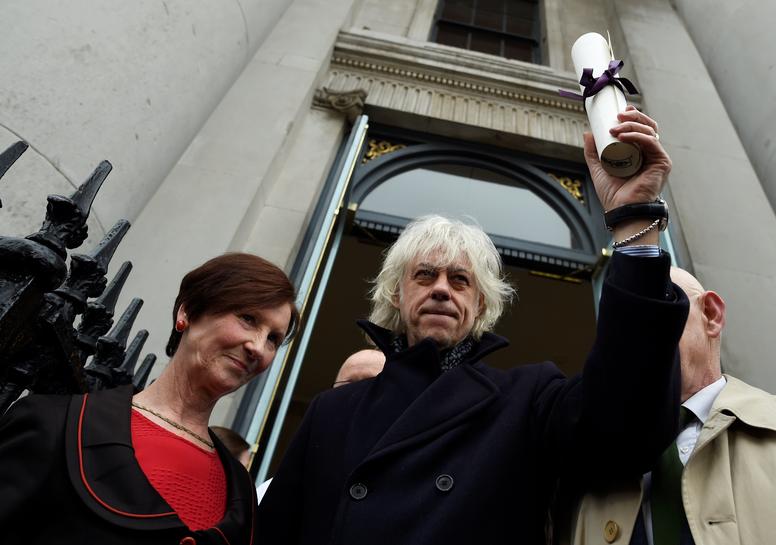 DUBLIN (Reuters) – Irish musician and activist Bob Geldof called Myanmar leader Aung San Suu Kyi “a hand maiden to genocide” on Monday as he returned his Freedom of the City of Dublin award in protest over his fellow recipient’s response to the repression of Rohingya Muslims.

Bob Geldof arrives to return his ‘Freedom of the City of Dublin’ with Oonagh Casey of Dublin’s City Manager’s office, after saying he could not continue to hold the honour with Myanmar leader Aung San Suu Kyi, in Dublin, Ireland, November 13, 2107. REUTERS/Clodagh Kilcoyne

“I don’t want to be on a very select roll of wonderful people with a killer,” Geldof told state broadcaster RTE. “Someone who is at best a handmaiden to genocide and an accomplice to murder.”

More than 600,000 Muslims from Myanmar’s Rakhine state have fled to refugee camps in Bangladesh after military operations described by the United Nations as ethnic cleansing.

Their plight has drawn outrage around the world. But Suu Kyi, long seen as a champion of human rights, has been criticized for failing to speak out against violence. There have been calls for her to be stripped of the Nobel Peace Prize she won in 1991.

Suu Kyi was given the Freedom of Dublin in 1999 while she was held under house arrest by Mayanmar’s then military government. She received her award at a reception in Ireland in 2012, two years after her release.

“Her association with our city shames us all and we should have no truck with it, even by default. We honored her, now she appals and shames us,” Geldof said in a statement.

The Lord Mayor of Dublin, Micheal Mac Donncha, said the city council had discussed taking away the honor and the matter was still under review. Last month she was stripped of a similar honor by the British university city of Oxford, where she was an undergraduate.

Bob Geldof arrives to return his ‘Freedom of the City of Dublin’ with local councillor Mannix Flynn and Oonagh Casey of Dublin’s City Manager’s office, after saying he could not continue to hold the honour with Myanmar leader Aung San Suu Kyi, in Dublin, Ireland, November 13, 2107. REUTERS/Clodagh Kilcoyne

But Mac Donncha, a councillor for the Irish nationalist Sinn Fein party, also criticized Geldof’s gesture, saying it was ironic as Geldof held a British knighthood despite “the shameful record of British imperialism across the globe”.

The former Boomtown Rats singer was given an honorary knighted in 1986 in recognition of his charity work, including organizing the 1985 Live Aid concert to help those suffering from starvation and disease in Ethiopia.

Other foreign recipients of the Freedom of Dublin include John F. Kennedy, Nelson Mandela and Mikhail Gorbachev.

Irish rockers U2, who had campaigned for Suu Kyi’s release while she was a political prisoner, also voiced disappointment and said her silence was “starting to look a lot like assent”.

“Who could have predicted that if more than 600,000 people were fleeing from a brutal army for fear of their lives, the woman who many of us believed would have the clearest and loudest voice on the crisis would go quiet,” the band said in a statement.

“For these atrocities against the Rohingya people to be happening on her watch blows our minds and breaks our hearts.”

The Myanmar military says it launched the crackdown in response to attacks by Rohingya militants.