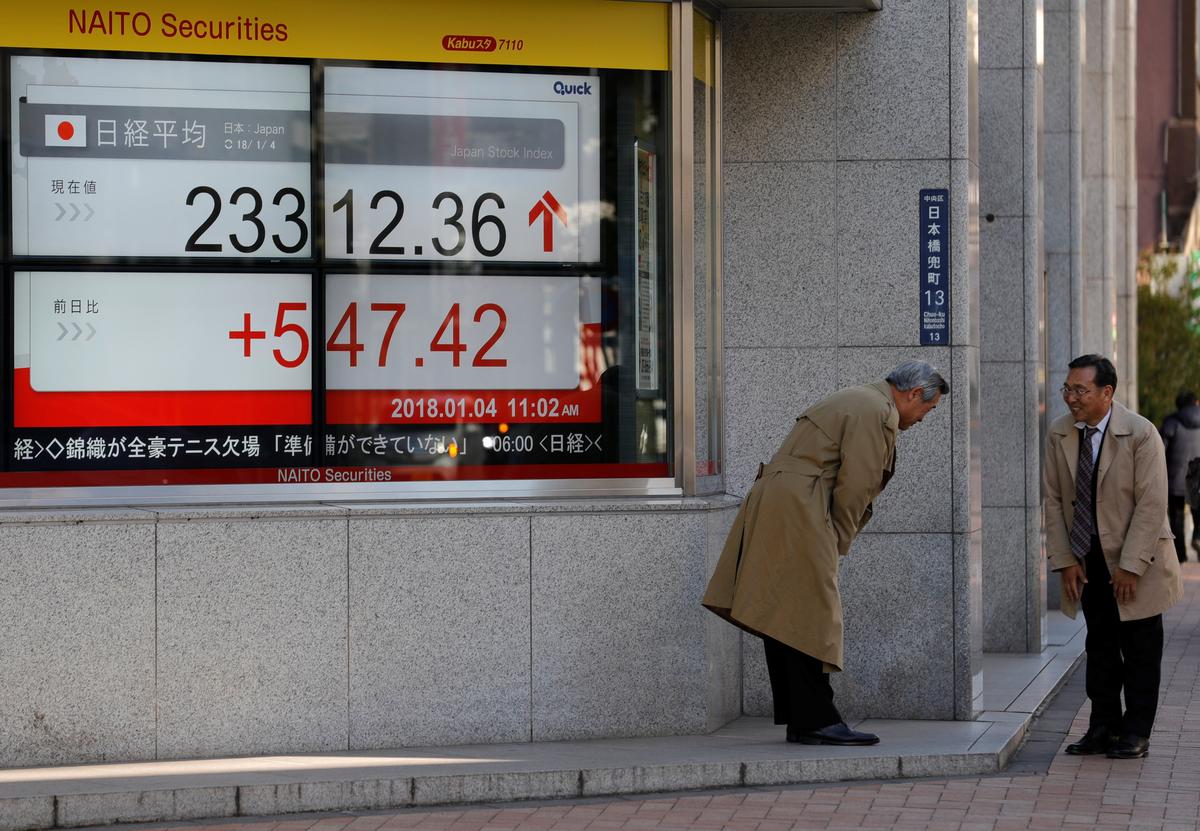 Speculation the Bank of Japan could start to withdraw its stimulus this year after it trimmed bond purchases this week put upward pressure on bond yields across the board and sent the yen to its highest level against the dollar in over a month.

Most euro zone government bond yields were 1-2 basis points higher at the open.

Germany’s 10-year bond yield hit its highest level since the October European Central Bank meeting when policymakers first announced the extension of its bond-buying scheme, with one trader citing heavy supply as the trigger for the move.

“So much focus has been on the Federal Reserve and the ECB, but everyone sort of forgot about the Bank of Japan. They sort of assumed that the BOJ would keep its foot in hard on the accelerator,” said Michael Hewson, chief markets analyst at CMC Markets in London.

“When they (the BOJ) reduced their bond-buying yesterday, people suddenly thought maybe we’ve underestimated the BOJ, maybe we should pay more attention to what their future policy path should be like … and I think it’s caused a reevaluation of risk in bond markets.”

Investors also said the rise in yields across the board is giving rise to some speculation among investors as to whether this is the start of a sustained bear market for bonds.

Rabobank analysts on Tuesday sent out a research note asking the question: “Have we finally entered a bond bear market?”

The analysts said in the note a global recovery and potential central bank action are possible drivers of a sustained sell off in bonds, though they stopped short of saying that this trend has begun.

Oil prices extended gains, with U.S. crude futures hitting a three-year high on a tight supply balance due to OPEC-led production cuts and a sharper fall in U.S. crude inventories.

Rising oil prices could fan inflation down the road, which could be detrimental to some countries that have been prone to high inflation.

In the currency market, the yen rose to its highest in over a month, extending the previous day’s gains after the Bank of Japan trimmed the amount of long-dated bonds it is buying.

While the move was in line with the BOJ’s subtle reduction in its bond buying over the past year, or ‘stealth tapering’, the reaction highlighted how sensitive markets are to a pullback in Japan’s massive stimulus.

“I don’t think yesterday’s operation is a hint of a policy change. But it highlighted the fact that unwinding of central bank stimulus will be a main theme this year. We could see more moves like this,” said a currency trader at a U.S. bank.

The Japanese government bond yield ticked up to 0.080 percent, the top of its range in the past several months.

Against a basket of currencies, the dollar was down 0.2 percent.

The BOJ’s move also helped to raise the 10-year U.S. bond yield above its December high to 2.573 percent, the highest since March last year, from 2.482 percent late on Monday.

European shares traded slightly lower, with most sectors except financials in the red as concerns grew over the direction of the bond market.

The pan-European STOXX 600 index was down 0.1 percent while the FTSE edged up 0.2 percent as a lower sterling helped British dollar earners.

The MSCI world equity index, which tracks shares in 47 countries, was flat.

Asian shares flinched from testing their 2007 record peak as investors booked profits in high-tech shares while oil prices hit three-year highs due to production cuts and a fall in inventories.

MSCI’s broadest index of Asia-Pacific shares outside Japan slipped 0.5 percent after six straight days of gains that had taken it within a stone’s throw of the record high touched in November 2007.

Information technology shares led the decline with a 1.4 percent fall as Samsung Electronics extended losses. The tech company’s profit guidance disappointed investors and raised worries the memory chip boom may be coming to an end.

“The rally has been a bit too fast. Investors are taking profits in high-flying hi-tech shares. But the earnings and economic outlook in Asia remains solid,” said Yukino Yamada, senior strategist at Daiwa Securities.

Some investors said risk sentiment had been boosted by an apparent easing in tensions in the Korean peninsula after North and South Korea agreed to future talks in their first official dialogue in more than two years.

Washington welcomed what it said was a first step to solving the North Korean nuclear weapons crisis, even though Pyongyang said those were aimed only at the United States and not up for discussion with Seoul.