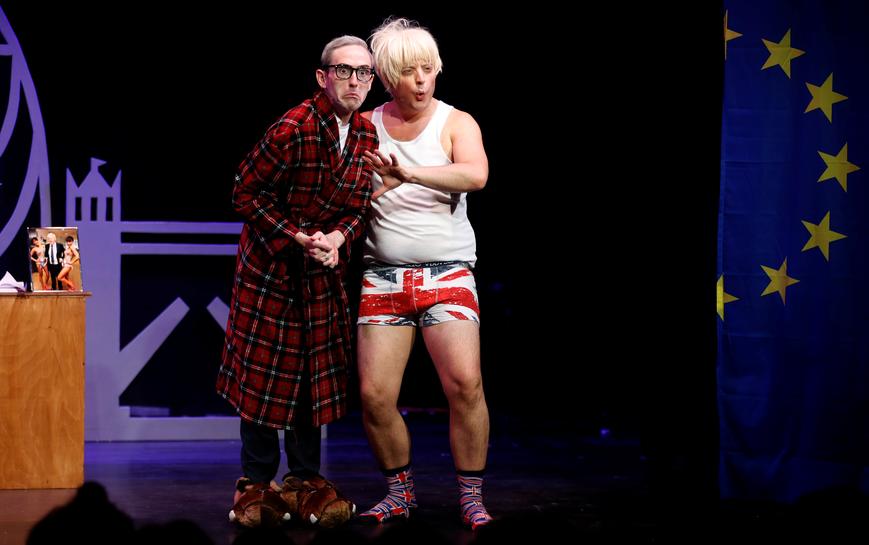 EDINBURGH (Reuters) – A retelling of Britain’s vote to leave the European Union and its dramatic political consequences might perhaps be framed as high drama or extreme farce.

But audiences at the Edinburgh Festival are lapping up a light-hearted sung comedy version, “Brexit The Musical”, a sellout featuring a cavorting Boris Johnson, the most prominent Brexit campaigner, in matching Union Jack underpants and socks, looking for a lost plan.

On hearing the news that “Leave” has won, Johnson, who in reality surprised many with his decision to campaign to leave the EU and is now Britain’s foreign secretary, sings in horror: “Leaving Europe will be a catastrophe/ Overnight we’ll bugger the economy.”

Britons voted to leave the EU in June 2016, but since then a host of unforeseen political consequences, including a snap election in which the Conservative government lost its majority, have mired the country in uncertainty. There is still no clarity about what Brexit will mean in practical terms.

In the comedy version, David Cameron is relieved, once he has resigned as prime minister after the vote, that he no longer has to pretend to be an ordinary man of the people. Michael Gove, Boris’s pro-Leave sidekick and in reality now agriculture secretary, sports a tartan dressing gown and fluffy slippers and just wants to be liked.

Members of the cast perform in ‘Brexit-The Musical’ at the Edinburgh Fringe, in Edinburgh, Scotland , Britain August 11, 2017.Russell Cheyne

And for the leader of the main opposition Labour Party, Jeremy Corbyn, the Brexit vote means above all that he has to miss the Glastonbury music festival.

With the political outlook still confused a year after the Brexit vote took place, the show’s writer, 39-year-old EU trade lawyer Chris Bryant, told Reuters the show was meant as “an escape from the dreary reality of where we are”.

An almost-happy ending, which cannot be revealed in print, is the stuff of fiction, he said. Bryant thinks it more likely that Britain will end up cutting all formal ties with the EU.

“I think we are heading towards a colossal mess, and I’m of the view that we will end up with a ‘hard Brexit’ almost by accident, rather than by design.”

The show will run for the whole month of the Festival, and Bryant hopes to take it to London.

34 errant cyclists caught over two days, including 2 riding against traffic flow: LTA
40 healthcare workers in Malaysia who had both doses of vaccine test positive for COVID-19
Commentary: Why many under 45 are hoping vaccination slots open in June
Police kill 4 in clashes with Bangladesh workers of Chinese-backed power plant
The true cost of the demand for cheap clothes, to you and the environment