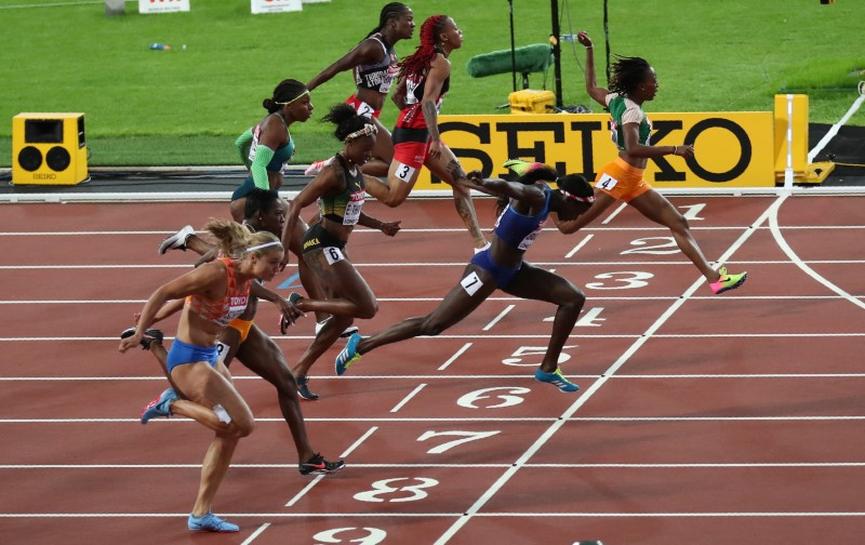 The momentum of 26-year-old Bowie’ exemplary dip sent her sprawling onto the track but by the time she recovered enough to look at the big screen she saw that she had won by one hundredth of a second and denied Ta Lou the chance to claim Ivory Coast’s first world title in any event.

Ta Lou appeared to have the race sewn up but fatally failed to throw herself at the line and there were moments of suspense before the result appeared on the stadium scoreboard.

The 26-year-old Bowie, who finished in 10.85 seconds, went one better than her silver medal at the Olympic Games in Rio de Janeiro last year while Ta Lou was left to ponder another desperately unlucky finish.

“I never give up until I’m over the line,” Bowie said. “Ta Lou went away fast but she always does. It didn’t bother me and I just kept pumping my legs and arms until the finish.

“The dive doesn’t feel too good now. But that has saved me at championships in the past. I’ve got a couple of days to recover before the 200 heats so I’ll be okay.”

Ta Lou was also unlucky not to walk away with a bronze medal in Rio after being denied a place on the podium by the rarely-resorted to thousandths measurement.

“I am just happy to have this medal, it is a dream come true,” she said. “I didn’t expect to be in the top three because all the girls have the power and the talent to make the podium.”

Thompson’s shock defeat came after Usain Bolt finished third in the men’s 100 metres on Saturday making it the first time since the 2005 World Championships in Helsinki that Jamaica failed to win either 100 metres race.

It was also the first sprint double for the U.S. since Helsinki when Gatlin and Lauryn Williams were the champions.

Thompson, who had looked in fine form in the heats and won on the same track in trainers to protect an injury in a Diamond League meeting one month ago, was at a loss to explain her defeat.

“I have to give those three girls a lot of credit, so big congratulations to them. I didn’t execute my race which is a shame but I’m healthy.”