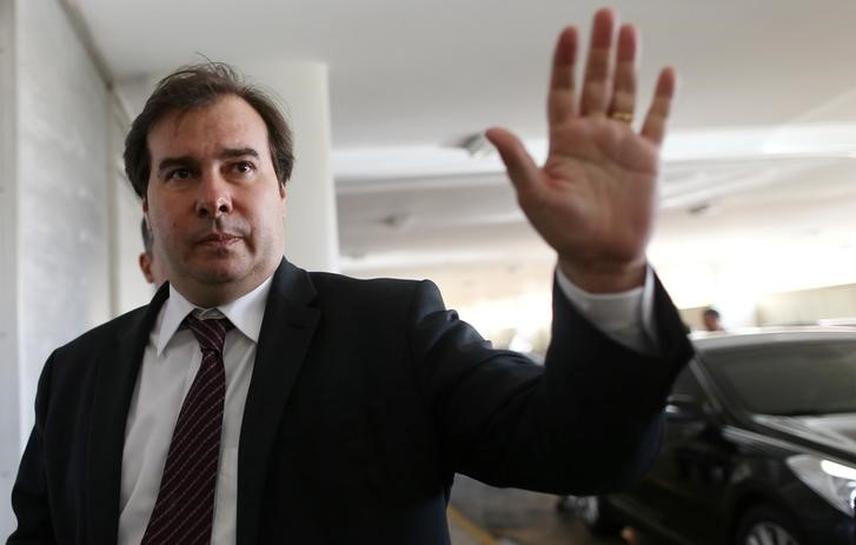 BRASILIA (Reuters) – The scion of a storied political clan is edging closer to being Brazil’s third president in just over a year, a change that would be blessed by business elites who view House Speaker Rodrigo Maia as the easiest solution to a political crisis.

President Michel Temer is charged with corruption and is likely to face at least two more graft charges in the coming weeks. He can only be tried by the Supreme Court if two-thirds of the lower house of Congress vote to allow it.

Temer, who replaced Dilma Rousseff last August after she was ousted by the Senate, is expected to survive the first vote, which is set for Aug. 2. But it is increasingly likely he could lose votes on subsequent charges, key lawmakers in Temer’s coalition and opposition have told Reuters in recent days.

If that happens, Temer would be suspended for 180 days, replaced temporarily by Maia, 47. If Temer is convicted by the top court, Maia could serve out the remainder of his term, which runs through the end of 2018, by winning an indirect election in Congress, where he would likely face little competition.

Maia was born in Chile when his father, Cesar, later a three-time mayor of Rio de Janeiro, was a communist in exile during Brazil’s 1964-85 military regime. A college dropout, Maia worked in banks before starting his political career in 1997.

The soft-spoken speaker still pledges allegiance to Temer, but behind the scenes he has sought to reassure investors and executives of his priorities, sources with knowledge of the meetings told Reuters.

With Maia as president, the bulk of Temer’s reform agenda would stay on track, including a proposed overhaul of the social security system, and the economic team led by Finance Minister Henrique Meirelles would remain, according to the speaker’s confidants in Congress.

Maia’s press representatives declined an interview request and dismissed reports of his meetings as media speculation.

The speaker’s market-friendly reputation has been bolstered by his leadership of the center-right Democrats Party, which argues for reducing the state’s role in the economy, cutting bureaucratic burdens on business and lowering taxes.

“We have nothing against an eventual presidency of Rodrigo Maia,” said Alencar Burti, president of ACSP, the main retail association in Brazil’s richest state, Sao Paulo. “As long as the president is replaced following the rules mandated by the constitution, we will give our full support for the new leader to keep current economic policy and approve the reforms.”

Maia also has received public endorsement from key lawmakers such as Senator Tasso Jereissati, head of the Brazilian Social Democracy Party (PSDB). Brazil’s third largest party, the PSDB, is in Temer’s coalition for now but leaders have openly debated a departure, opening the door for smaller parties to follow.

Maia has won the respect of colleagues in the lower house as a good listener who freely admits when he is wrong about an issue or simply does not understand it.

After keeping a low profile about graft allegations facing Temer for more than a month, Maia has become more assertive on social media of late. This week he defied Temer’s proposal to tweak a labor reform bill by presidential decree.

Allies say he needs to be very careful. Any hasty move to ascend to power could be interpreted by members of the coalition as an unseemly betrayal of Temer, a long-time ally.

“He will have to make sure he does not jump the gun,” said Betinho Gomes, a PSDB lawmaker who will vote to suspend Temer.

As Maia gets closer to the presidency, his past is coming under greater public scrutiny. Like Temer and dozens of fellow lawmakers, Maia appeared in a list of politicians accused by executives from engineering group Odebrecht SA of receiving millions of reais in illegal campaign financing. He has not been charged with a crime and denies any wrongdoing.

If he becomes president, the investigation into him would be suspended until he leaves office and he would be able to seek re-election for four more years in October 2018.

Maia is far from a household name in Brazil. In 2012 he won just 3 percent of the vote in the Rio mayoral race.

His political skills have never faced a task as tough as steering Brazil out of the current crisis, said Ricardo Ismael, a political scientist at Catholic University of Rio.

“Rodrigo is being forced to become a mature politician,” Ismael said. “He will need to be surrounded by good aides.”