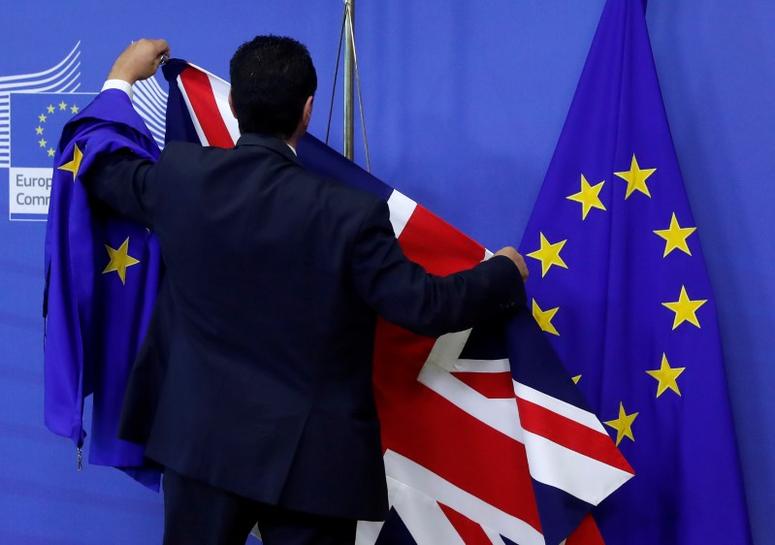 LONDON (Reuters) – Britain will propose setting up an interim customs agreement with the European Union after Brexit to allow the freest possible trade of goods.

But it will also seek the right to negotiate other trade deals, a possible sticking point in the talks.

According to excerpts of a government document to be published on Tuesday setting out Britain’s strategy, the government will say one option to minimise friction when it leaves the bloc in March 2019 would be to introduce a temporary customs union which should be “time-limited”.

That would provide certainty for businesses, the government said, aiming to address a main concern of companies who fear the introduction of customs checks will cause expensive delays.

“Ministers will announce an intention to seek an ‘interim’ period with the EU of close association with the customs union that would allow for a smooth and orderly transfer to the new regime,” the government said in a statement ahead of publication of the first in a series of “future partnership papers”.

“One possible approach would be a temporary customs union between the UK and the EU … During this interim period, which will be negotiated with Brussels, Britain will look to negotiate bold new trade relationships around the world.”

Businesses welcomed the proposals, but the Confederation of British Industry also warned the government that “the clock is ticking and what matters now if giving companies the confidence to continue investing as quickly as possible”.

Prime Minister Theresa May and her government are keen to move the talks with the EU forward to tackle the future relationship rather than focusing only on their divorce, and have promised to publish a series of policy documents this week.

But after being criticised by some EU officials for being ill-prepared for the first rounds of negotiations, the government’s demand to secure trade deals while participating in a temporary customs union may cause further problems.

“It looks like the new unified position in the cabinet is to return the government to the territory of wanting to have their cake and eat it,” said Chris Leslie, a pro-EU campaigner and member of Britain’s opposition Labour Party.

Countries that are part of the EU’s customs union are not allowed to negotiate bilateral trade deals and May’s government has said Brexit means Britain must leave the customs union.

But Turkey, while not an EU member, is part of a separate customs union for industrial goods and can still negotiate bilateral trade deals. It was not clear whether Britain was pursuing a similar arrangement to Turkey.

The government said that by sorting out the customs arrangements, Britain and the bloc could avoid a “hard border” with EU member state Ireland, something which officials fear could reignite tensions between Irish nationalists and unionists.

It proposed two different ways — a highly streamlined customs arrangement managed by Britain, or a new customs partnership with the EU, which could “negate the need for a customs border”.

Its proposals on a future customs arrangement are set out in one of several position papers intended to flesh out the government’s Brexit vision and show a united stance over the future relationship after rifts emerged among ministers.

On Wednesday, the government will set out its solutions for the border between Northern Ireland and Ireland.