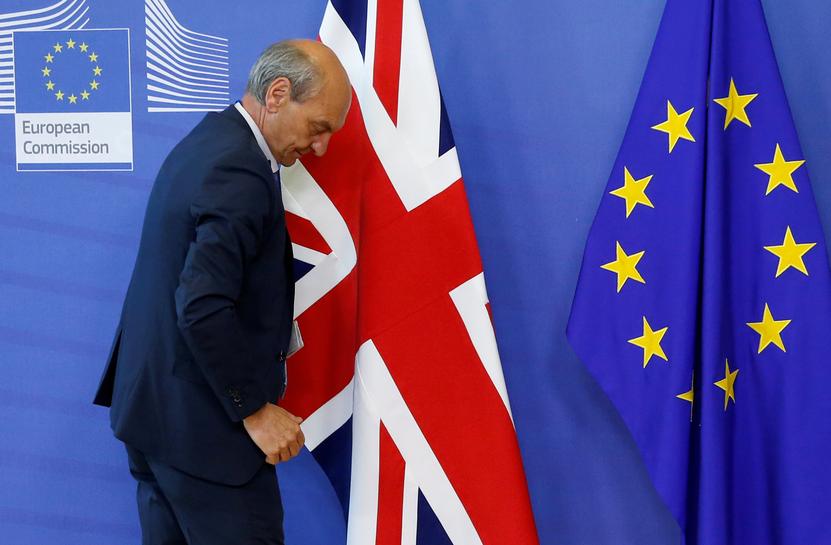 LONDON (Reuters) – Britain said on Thursday it was “confident” talks with the European Union would move towards discussing their future relationship by October, in contrast to warnings from the top EU negotiator that the target is receding.

Prime Minister Theresa May’s government wants to push the discussion beyond the divorce settlement soon, to offer companies some assurance of what to expect after Britain leaves the EU in March 2019. She said that despite a lot left to do, she was confident of securing “a deep and special relationship”.

But the bloc has repeated that until there is “sufficient progress” in the first stage of talks on the rights of expatriates, Britain’s border with EU member Ireland and a financial settlement, officials cannot consider future ties.

Last month, the EU’s top Brexit negotiator, Michel Barnier, said talks on future relations had become less likely to start in October because of a lack of progress on the “divorce”. nL5N1KI4UC]

“Government officials are working at pace and we are confident we will have made sufficient progress by October to advance the talks to the next phase,” a spokeswoman for Britain’s Department for Exiting the European Union said in a statement on Thursday.

“As the Secretary of State (Brexit minister David Davis) has said, it is important that both sides demonstrate a dynamic and flexible approach to each round of the negotiations.”

May said the government had shown the work it was putting into the talks with this week’s release of papers, including those with proposals for a future customs arrangement and for the border between Ireland and the British province of Northern Ireland.

“It’s good that we’ve had a constructive, positive approach to the negotiations so far, and those negotiations are continuing … There’s a lot to be done,” she told local television.

“We will develop a deep and special partnership with the European Union for the future that’s good for the UK and good for the EU as well.”

The difference in tone was underlined when a spokesperson for the European Commission, the EU’s executive, said simply that the two sides had agreed the talks’ structure: “The next round will be in the week of 28 August.”

On Wednesday, unidentified sources were quoted by Britain’s Sky News as saying the two sides might have to delay talks on their post-Brexit relationship until December because they would not make the progress required by the EU.

British businesses have demanded more certainty from the government over how a relationship with the EU will work after Brexit, saying they cannot make investment decisions otherwise.

According to a survey of 200 chief financial officers across Britain and other parts of Europe by Thomson Reuters, a majority of businesses are yet to change their strategic planning because of Brexit.

While 69 percent of businesses said they had not seen an impact from the vote on their strategic planning, 21 percent of the CFOs reported they had held off from expanding in Britain.

More damning for the government, confidence among CFOs in May’s ability to secure a positive deal for business is just 3.5 out of 10, the survey showed.

Possibly responding to criticism that it is not prepared for the talks, May’s government this week published its proposals for customs arrangements and for the Northern Irish border.

Both suggested that Britain wanted to mirror much of what is already in place, to reduce friction at borders, and said there should be no frontier posts or immigration checks between Ireland and the north.

But this would mean EU citizens wishing to enter Britain could do so by traveling to Ireland and crossing the border unchecked – something that is likely to antagonize many Britons who said that controlling immigration was a major reason for their referendum vote last year in favor of Brexit.

The EU would probably balk at the proposal as well, as it would be unlikely to accept the possibility of a free flow of non-EU standard goods into member state Ireland if Britain left the bloc’s customs union and single market.

An even more difficult part of the talks might be how much Britain should pay the EU when it leaves in March 2019. While saying it will meet its responsibilities on the “Brexit bill”, Britain has questioned suggestions from the EU that it must pay around 60 billion euros.