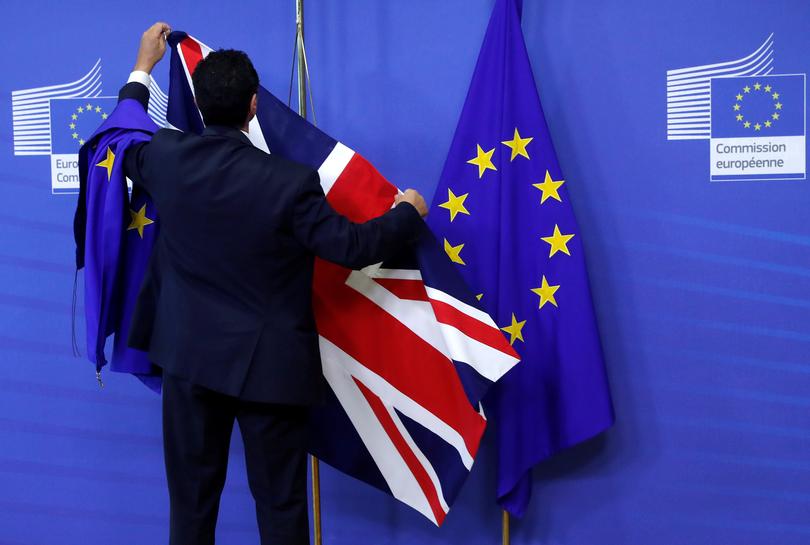 LONDON/BRUSSELS (Reuters) – Britain urged the European Union on Monday not to separate goods from services in Brexit talks, further outlining its negotiating stance to try to nudge discussions forward to a second phase on future relations.

But Michel Barnier, the chief Brexit negotiator for the other 27 countries remaining in the EU, poured cold water on chances that talks would move to what happens after Britain leaves in March 2019.

The bloc has said “sufficient progress” was needed on the three areas before the bloc decides to launch talks on the future, including on trade rules.

Barnier said last month that was less likely to happen in October, as previously expected, because of lack of progress on the divorce settlement.

In two position papers – one on goods and the other on confidentiality – the British government set out more proposals that it said would help “give businesses and consumers certainty and confidence” after Brexit materialises.

Much of what it proposed was in line with the EU’s own policy document published earlier this year. But in one departure, Britain’s paper said the provision of goods and services should be treated as one, citing the example of a maintenance contract that comes with the sale of an elevator.

“These papers will help give businesses and consumers certainty and confidence in the UK’s status as an economic powerhouse after we have left the EU,” Brexit minister David Davis said in a statement.

“They also show that as we enter the third round of negotiations, it is clear that our separation from the EU and future relationship are inextricably linked … and (we) are ready to begin a formal dialogue on this and other issues.”

John Foster, director of campaigns at business lobby CBI, called the government’s position “a significant improvement upon the EU’s current proposal”, but said the only way to offer companies certainty was to agree interim arrangements.

“The simplest way to achieve that is for the UK to stay in the single market and a customs union until a comprehensive new deal is in force,” Foster said in a statement demanding something Prime Minister Theresa May has ruled out.

After a slow start to negotiations to unravel more than 40 years of union, Britain hopes that by publishing policy papers and proposals for future ties it can persuade the EU to move beyond discussion of the divorcement.

The two papers published on Monday cover some of the easier parts of the negotiation and followed a pattern of Britain wanting to mirror much of its existing relations with the EU, which has said Britain cannot expect to enjoy as advantageous ties outside the bloc as it has had inside.

The government said it wanted goods on the market before Brexit to continue to be sold without additional requirements, to avoid unnecessary duplication of compliance activities and to facilitate the continued oversight of products.

But it said one of the areas ministers would like to explore was that of services supplied together with goods.

“The discussions should take account of the deep connections between the availability of goods and the services attached to goods, including those that have been offered prior to exit,” the paper said.

“The UK wants to ensure that these connections are explored comprehensively through discussions to avoid uncertainty and disruption to business and consumers.”

The EU’s own position on the matter only mentions goods, not services, and says those that have reached the markets in the bloc and Britain before the exit date should remain available under the existing, pre-Brexit rules.

Reporting by Elizabeth Piper in London and Gabriela Baczynska in Brussels, editing by Richard Balmforth