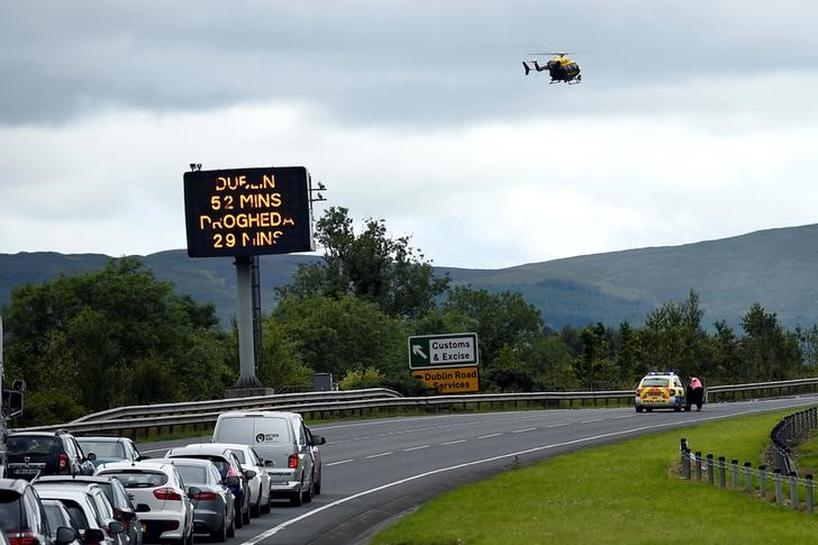 LONDON (Reuters) – There should be no border posts between Ireland and the British province of Northern Ireland after Brexit, Britain said in an early attempt to resolve one of the most complex aspects of its European Union exit.

Some 30,000 people cross the 500 kilometre border every day without customs or immigration checks, testing negotiators who have to work out how to tighten controls without inflaming tensions in a region where around 3,600 people were killed before a peace agreement in 1998.

The British government said in a paper due to be published on Wednesday that it wanted a seamless and frictionless frontier without “physical border infrastructure and border posts”, arguing that new customs arrangements it proposed on Tuesday would allow the free flow of goods.

The issue of how the Republic of Ireland and Northern Ireland will fare is particularly sensitive given the decades of violence over whether it should be part of Britain or Ireland.

“Both sides needs to show flexibility and imagination when it comes to the border issue in Northern Ireland,” a British government source said.

Britain put forward two options for future customs arrangements with the EU on Tuesday, the first would involve no customs border at all, while a second detailed ‘highly-streamlined’ customs checks.

However, the idea met with scepticism among some of Britain’s soon-to-be former EU partners, with one EU official describing the idea of an invisible border as ‘fantasy’.

“We have some very clear principles. Top of our list is to agree upfront no physical border infrastructure — that would mean a return to the border posts of the past and is completely unacceptable to the UK,” the British source said.

The EU has repeatedly warned that Britain cannot expect to maintain the benefits of the European single market after Brexit, with chief negotiator Michel Barnier saying in July that “frictionless trade” with the EU was not possible.

However, the British government also said it wants to maintain a Common Travel Area, a pact that allows free movement between the United Kingdom and Ireland for British and Irish citizens.

And it rejected the idea of a customs border in the Irish Sea that separates England, Wales and Scotland from Ireland and Northern Ireland as “not constitutionally or economically viable.”

Northern Ireland sold 2.7 billion pounds of goods into Ireland in 2015, according to official figures, and many businesses have complex supply chains that involve crossing the border multiple times during the production process.

Commenting on the advance briefing of the position paper, the Irish government said it was “timely and helpful” and that it hoped enough progress could be made to move talks forward.

“Protecting the Peace Process is crucial and it must not become a bargaining chip in the negotiations,” the Irish government said in a statement, in reference to the Good Friday Agreement which was signed on April 10, 1998 after multi-party talks and led to the creation of an elected assembly in Belfast.

The border is one of three priority issues that the EU is insisting must be dealt with during the opening rounds of talks before moving on to Britain’s future relationship with the bloc.

The first two rounds of divorce talks in Brussels have made limited progress, prompting the EU to warn the next phase – which Britain is keen to get to – could be delayed unless Prime Minister Theresa May’s team come armed with more detail.

“They don’t outline how a frictionless or seamless border can be achieved when the UK leaves the EU and won’t reassure anybody about the impact of Brexit on Northern Ireland,” Labour Party lawmaker Conor McGinn said.