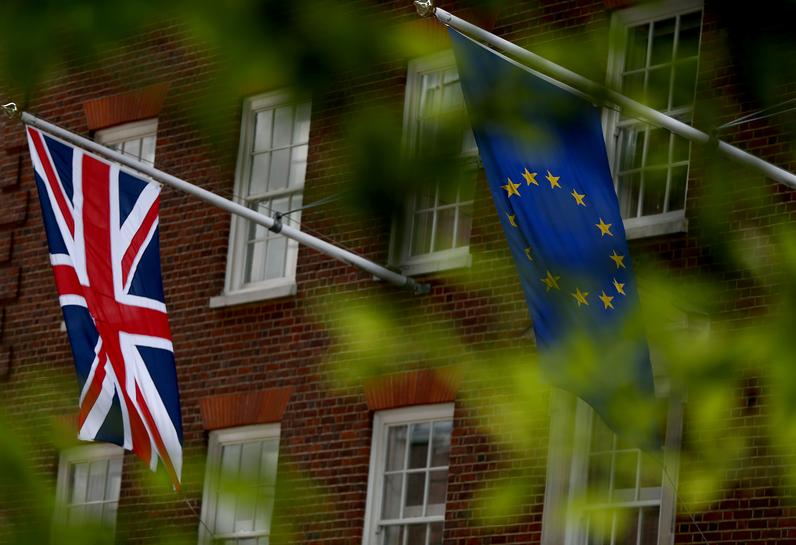 LONDON (Reuters) – Britain will not rule out the possibility that the European Union may retain oversight of customs controls at UK borders after it leaves the bloc, as the country seeks ways to keep unhindered access to EU markets following Brexit.

Last week, the UK published a policy document proposing two possible models for British-EU customs arrangements after withdrawal from the EU in 2019.

The first model was a “highly streamlined customs arrangement” which involved the re-introduction of a customs border but which envisaged electronic tracking of shipments, rather than physical checks of goods and documents at the border.

An alternative proposal was the “new customs partnership” which would remove the need for a UK-EU customs border altogether.

Under this model, the UK would operate as if it was still part of the bloc for customs purposes. British goods would be exported tariff-free and Britain would levy EU tariffs on goods coming into the UK for onward passage to the EU directly or as components in UK export goods.

However, lawyers said there would be a need for a mechanism to oversee the “new customs partnership” to ensure that the UK was correctly monitoring goods coming into the UK and destined for Europe.

The EU’s system of movement of goods across EU borders without checks works on the basis that all members closely monitor shipments coming into the bloc from outside, to ensure the correct tariffs are paid and that goods meet EU standards.

The EU anti-fraud agency OLAF polices customs agencies across Europe to ensure they are correctly monitoring imports. OLAF has the powers to conduct on-the-spot inspections and seek information from customs bodies.

If OLAF finds weaknesses in a country’s systems and that the member is not charging the appropriate duties on imports from outside the EU, it will recommend that the European Commission, the EU’s executive arm, should recover money from the offending member.

For example, in March OLAF slammed lax UK border controls and recommended the European Commission reclaim 2 billion euros (£1.82 billion) the agency said was lost because Britain had failed to apply the correct EU duties on imports of Chinese clothes and footwear in recent years.

A spokesman for the UK’s tax authority said it questioned OLAF’s estimate of lost revenue. Duties collected are paid to Brussels.

Commission duty recovery claims can be appealed to the Court of Justice of the European Union (ECJ), the EU’s highest court.

UK Prime Minster Theresa May has said the UK will no longer be subject to the jurisdiction of the ECJ after Britain’s exit from the bloc.

However, the British finance ministry declined to say if the country would bar OLAF from policing the UK’s customs system under the “new customs partnership” model or whether it would allow the Commission to make demands for recovery of lost duties.

“The exact form of the arrangements will be agreed as part of the negotiations,” a ministry spokeswoman said.

Lode Van Den Hende, a partner with Herbert Smith Freehills in Brussels, said it was hard to see how the customs partnership model could work without OLAF or a similar body policing the UK’s monitoring of imports destined for the EU.

“In practical terms they (Britain and the EU) would have to operate in the same way or the whole thing would fall apart,” he said.

“There is no need for an EU institution to police our customs, and we should not accept this,” he said in a statement.

“Any dispute about each other’s customs arrangements should be settled by an independent arbitrator, as with any other international agreement, not by an institution which belongs only to one party of the agreement,” he added.

Van Den Hende said the ECJ may not accept the creation of an independent body to oversea EU customs. Customs are a matter of EU law and the court is supposed to be the highest authority on this.

Also, the breadth of areas in which the UK wishes to retain free trade with Europe means many such independent arbitrators would be required. They would be needed to monitor enforcement of health standards, standards in financial services and rules that apply to a host of other regulated markets.

“In theory you can design that, but in practice neither the UK nor the EU would want that because you would be replicating institutions which already exist. It would be a huge amount of money and effort,” he said.

“This is in one of the fundamental problems about Brexit. The UK wants to retain deep integration but the UK doesn’t like the institutions that administer all this stuff,” Van Den Hende said.