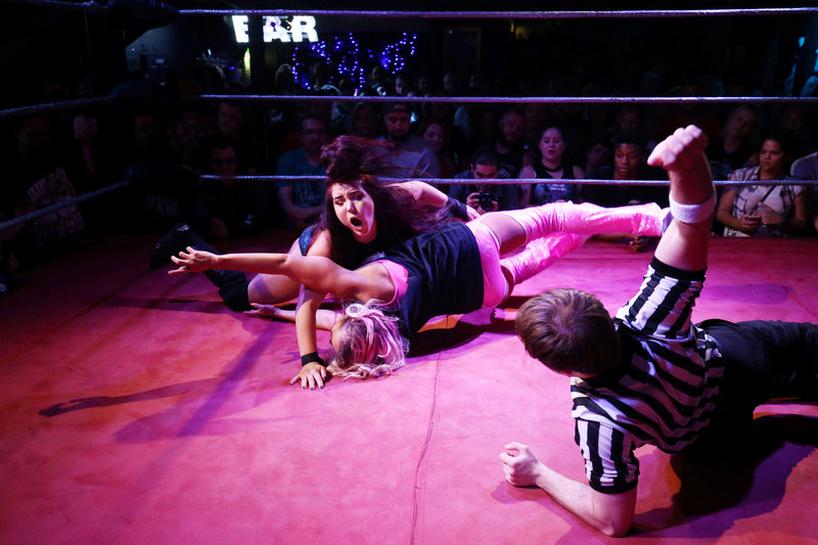 LONDON (Reuters) – By day, Claire Heafford works as a personal trainer but, once every few weeks, she dons a mask and takes on the role of “Rag Doll” to slam and grapple around the ring in an all-female wrestling night in London.

Heafford, 36, is one of the performers at EVE, an all-female wrestling show that takes place once or twice a month in London’s Bethnal Green. The event features costumed combatants taking part in carefully choreographed contests.

While female wrestlers have long featured on the professional circuit in the U.S., their amateur British counterparts have faced challenges before climbing into the ring.

Their cause has been helped in recent months by the advent of U.S. streaming giant Netflix’s program “Glow”, a 1980s-set drama chronicling the lives of aspiring female TV wrestlers.

Heafford agrees that the program has helped to broaden British female wrestling’s appeal.

“I’ve got friends who have been watching “Glow”, have read the Time Out article, and now are like, ‘oh this is kind of cool what you are doing – I want to come down and watch’,” she said.

During the performance, held before a 200-strong, mixed gender crowd in a venue beneath the archway of an elevated railway track, the atmosphere evokes a concert or a party.

There is music and audience participation along with back-stories of rivalries between the wrestlers, to spice up the action in the ring.

Though staged, the fights see wrestlers put on displays of highly-coordinated athleticism – bouncing off ring ropes and jumping off corner posts to slam their opponents to the mat, and flipping and twisting into elaborate holds.

“It is an absolutely fabulous thing to have here, and women’s wrestling is only opening up, there’s just no stopping,” an audience member who gave her name only as Ellen told Reuters.