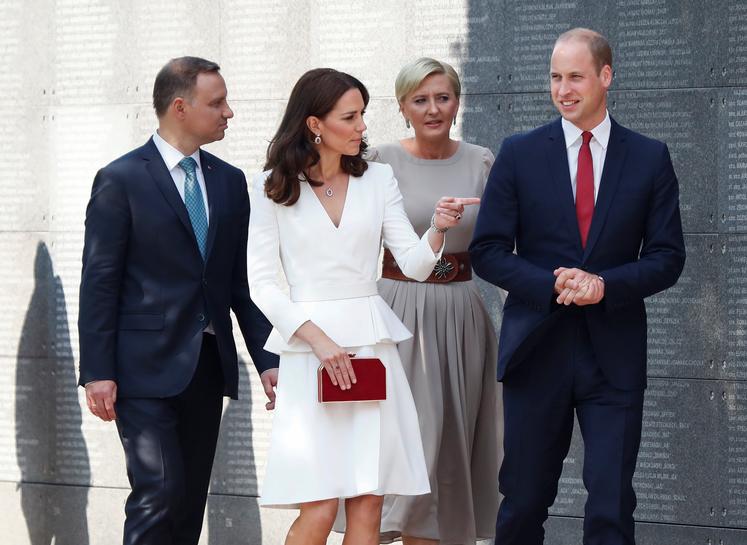 WARSAW (Reuters) – Britain’s Prince William took his young family to Warsaw on Monday to begin a four-day tour of Poland and Germany that will take in World War Two memorials and meetings with locals.

The royal couple travelled with their children – Prince George, who turns four this month and his two-year-old sister, Charlotte.

After meeting the Polish president and first lady, William, second in line to the throne, and Kate, visited the Warsaw Uprising museum which commemorates the 1944 battle against Nazi occupiers in which tens of thousands died and the city was razed to the ground.

Later they met young entrepreneurs, before attending a party organised by the British embassy to celebrate Queen’s 91st birthday, where William praised the strong ties between the two countries. Around 900,000 Poles live in Britain while Poland hosts British troops as part of NATO forces.

Polish president Andrzej Duda his wife Agata Kornhauser-Duda, Prince William, the Duke of Cambridge and Catherine, The Duchess of Cambridge are seen at the Warsaw Rising Museum in Warsaw, Poland July 17, 2017.Kacper Pempel

“In our warm relationships we are NATO partners and for the first time since the Second World War our soldiers station on your soil,” William said during the party in Royal Lazienki park in Warsaw.

“Such diplomatic, military, cultural ties promise a lot and give opportunities for the future,” William told during his speech which he started and finished in Polish, the second most spoken language in Britain.

Poland joined the European Union in 2004 and had been one of Britain’s closest allies in calling for reform of the bloc before Britons voted to leave the EU in a 2016 referendum.

On Tuesday the royals will tour a former concentration camp in Stutthof, the first built by Nazi Germany outside its borders after the start of World War Two. More than 85,000 died there.

Also on Tuesday, they will visit a museum in Gdansk commemorating the Solidarity movement which shook communist rule in the 1980s. In Germany they are due to visit the Berlin Holocaust Memorial.

Singapore could expand progressive wage model to retail sector
‘Made in Taiwan’ COVID-19 vaccines could be ready in July, says minister
He couldn’t lose weight on his own. Then he opted for a surgery that’s gaining ground
Australia’s Alexei Popyrin fights back to win Singapore Tennis Open
Chinese Aircraft Carry Out Exercises, Pressure Taiwan in South China Sea Region