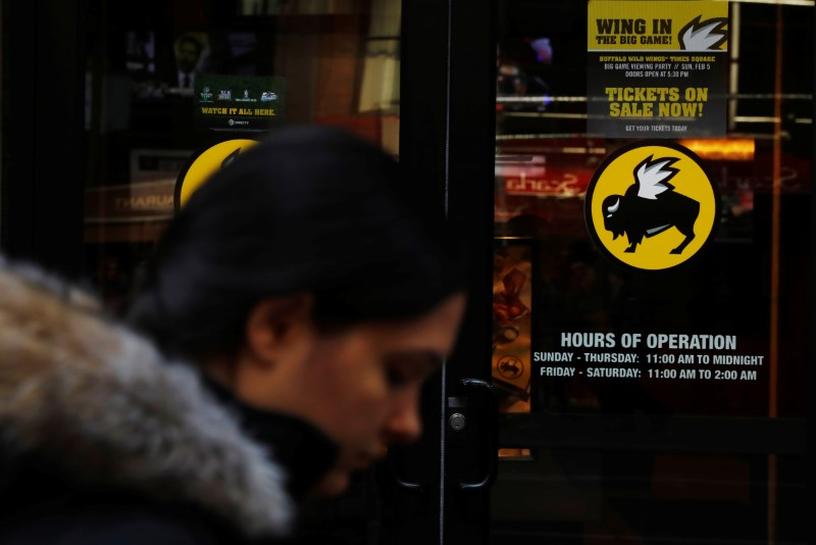 NEW YORK Buffalo Wild Wings Inc (BWLD.O) Chief Executive Officer Sally Smith said she will retire by the end of the year after an activist hedge fund won a bitter proxy contest that put three of its directors on the chicken-wing restaurant’s board.

Smith’s decision to step down from the leadership role she has held for more than two decades after spending the past year trying to fend off Marcato Capital Management’s demands for change, underscores just how strongly the activist investor’s message resonated with other shareholders.

While the votes will not be officially tallied for a few days, early indications show that roughly two-thirds of shareholders voted for the San Francisco-based hedge fund’s nominees, a person familiar with the voting said on Friday.

Smith, who has been CEO since 1996, oversaw a ten-fold increase in the company’s stock since the company went public in 2003. But “BDubs” – as it is known among loyal sports loving patrons – has struggled to jolt its market value since shares hit a peak of $201.14 in September 2015.

“Now’s the time where some new blood is needed,” said restaurant industry analyst Stephen Anderson, who added that the company needed to keep menu prices down and to add more discipline around cost controls.

Marcato, which owns more than 9 percent of the company’s shares, has seen its flagship fund return 7.7 percent so far this year while its smaller Encore fund is up 16 percent, handily beating the average hedge fund’s 2.3 percent gain for the year to date as well as the Standard & Poor 500 stock index’ 8.7 percent gain.

Minneapolis-based Buffalo Wild Wings has a market value of $2.6 billion.

Marcato publicly launched its campaign last July, pressuring Smith and the board to pursue strategies that it believes will boost the company’s stock price, which had lagged in the year prior compared with peers.

From the beginning, Marcato, run by Mick McGuire, pushed for the company to franchise 90 percent of its more than 1,200 restaurants – up from the current 50-50 ratio – and to speed up its international and tech expansion. This year, McGuire stepped up the pressure when he called for Smith to be ousted.

The fight turned increasingly bitter and personal but in the end became a victory for the activist at a time many of these funds are reaching settlements with companies as Elliott Management did recently with Arconic Inc.

A fourth Marcato nominee, restaurant industry veteran Lee Sanders, was not elected to the board.

In an odd twist the annual meeting was adjourned for an hour this morning, sending the stock price tumbling as speculation mounted that Marcato had lost the election and was possibly trying to exit its stake.

But the share price rallied after the company said in a statement that Smith was stepping down as CEO and from her board seat. It closed up 1.74 percent at $152.35 in Friday trading on Nasdaq.

McGuire has said the share price could triple if his ideas were implemented.

Buffalo Wild Wings had nine directors up for election at the meeting, three of whom Marcato had targeted to replace: Cynthia Davis, Oliver Maggard and Jerry Rose.

The other company nominees were Rovit, who was a nominee for both Marcato and Buffalo Wild Wings, Andre Fernandez, Janice Fields, Harry Lawton and Harmit Singh, who all ran uncontested.

According to a person familiar with the matter, Rose and Davis will remain on the board, with one of them filling Smith’s empty seat until next year’s election, while Maggard will step down. The board will remain at nine members.