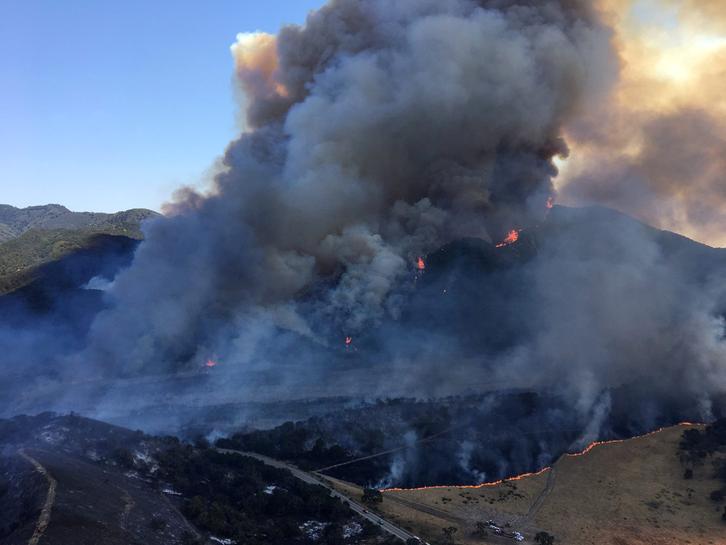 LOS ANGELES (Reuters) – More than 7,000 firefighters battled 13 large wildfires in California on Tuesday as the state entered its peak fire season with hot and dry conditions threatening to spread flames that already have forced thousands of people from their homes.

The biggest evacuation was in Northern California’s Butte County, where the 5,800-acre (2,350-hectare) Wall Fire, which began on Friday, displaced about 4,000 people, officials said.

“We’re certainly getting to where we’re at the peak of fire season conditions,” Cal-Fire Chief Ken Pimlott said in an interview with Capital Public Radio on Tuesday.

In the U.S. West, where more than 50 uncontained large fires are burning, temperatures in many locations will top 100 degrees Fahrenheit (38 degrees Celsius) this week with only scattered showers to possibly quell some flames, said meteorologist Brian Hurley of the National Weather Service.

Some people displaced by the Wall Fire were allowed to return to their houses on Tuesday, as firefighters held containment lines around 45 percent of the blaze, compared to 35 percent the day before.

A crew member prepares to replace a downed power pole next to the remnants of a home burned by the Wall Fire near Oroville, California, July 10, 2017.David Ryder

Another fire about 40 miles (64 km) to the southeast near Lake Cachuma forced the evacuation of thousands of campers, including some who left behind their trailers in a rush, and dozens of residents when it broke out on Saturday, officials said. It was 25 percent contained on Tuesday after burning more than 10,000 acres (4,047 hectares).

A fire on the border between California and Nevada closed a 20-mile (32-km) stretch of Interstate 80 on Tuesday, said Deanna Shoopman, a spokeswoman for California Department of Transportation.

So far this year, more than twice as much land mass in California has been charred by fires compared to the same time last year, said Heather Williams, a spokeswoman for the California Department of Forestry and Fire Protection.

Fires in the western Canadian province of British Columbia have forced 14,000 people from their homes and disrupted logging and mining operations.

Additional reporting by Gina Cherelus in New York and Keith Coffman in Denver; Editing by Toni Reinhold and Bill Trott