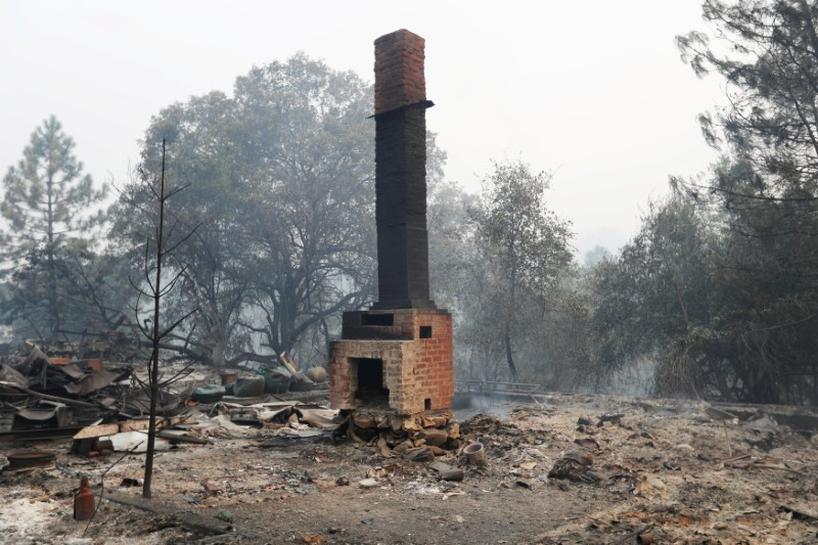 LOS ANGELES (Reuters) – A raging wildfire in central California that has forced more than 5,000 people from their homes spread rapidly on Thursday after destroying dozens of buildings not far from Yosemite National Park, fire officials said.

The Detwiler Fire, which is menacing the former gold rush town of Mariposa in the Sierra Nevada foothills, is only 10 percent contained, the California Department of Forestry and Fire Protection, or Cal Fire, said on its website.

“We’re doing everything we can to protect that town and all the other communities in that area,” Amy Head, a spokeswoman for Cal Fire, said by telephone. “We still have a lot of work ahead of us to get the upper-hand on this fire.”

Mariposa is 50 miles (80 km) outside Yosemite National Park and largely dependent on tourism.

Bright flames seen on a road in Mariposa County, California in this picture obtained from social media.

It has expanded by more than 22,000 acres (8,903 hectares) since Thursday morning. Cal Fire said it has burned 45 buildings and damaged another six since it began on Monday. The cause of the fire is under investigation.

The fire came within a half-mile of Mariposa on Wednesday, said Cal Fire spokeswoman Shanelle Saunders. The town’s 2,000 residents were ordered on Tuesday to evacuate.

Yosemite National Park remained open. Saunders said the biggest concern with the park on Thursday was air quality due to heavy smoke.

The community of Coulterville was evacuated on Wednesday, Saunders said.

The Detwiler Fire, named after a road near where it started, was threatening 1,500 structures, Cal Fire said. It was among 44 large fires across 11 western states as of Thursday, according to the National Interagency Fire Center’s website.

The last big wildfire to affect Yosemite National Park was the Rim Fire in August 2013, which became the third-largest wildfire in California’s history.

Additional reporting by Gina Cherelus in New York and Brendan O’Brien in Milwaukee; Editing by Toni Reinhold and Cynthia Osterman