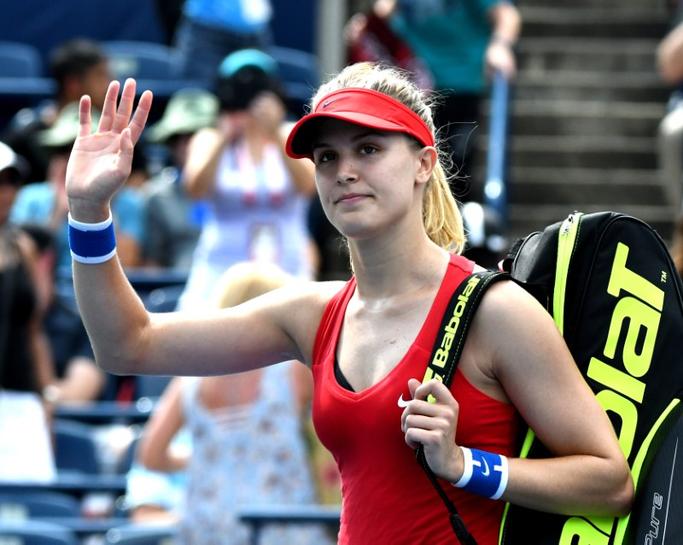 TORONTO (Reuters) – Eugenie Bouchard’s mid-season nosedive continued on Tuesday as the Canadian was swept aside 6-3 6-4 by Croatian qualifier Donna Vekic despite having home advantage and the backing of an excited crowd in a first round clash at the Rogers Cup.

With only one match win since her French Open second round exit, Bouchard was hoping a visit home would result in a return to the victory column.

But she drew little inspiration from the crowd as she added to a long list of disappointing efforts, committing 32 unforced errors and seven double faults while being broken six times by a 21-year-old making a her first appearance in the main draw.

“I guess I am going to have to have a tournament in Croatia to finally have the home crowd,” said Vekic, who earned a second round meeting with German third seed and former world number one Angelique Kerber.

“I hope I am going to have support (in the) next match and I hope we are going to play on this court again,” added Vekic.

Bouchard, ranked as high as number five and hailed as the next big thing in women’s tennis when she reached the Wimbledon final and the semi-finals at the Australian Open and Roland Garros in 2014, has seen her ranking plummet to 70 in the world and needed a wildcard entry into her home tournament.

The Rogers Cup, which alternates between Toronto and Montreal where Bouchard was born and raised, has never exactly been home-sweet-home for the Canadian who has made seven main draw appearances but four times dropped her opening match and only once advanced past the second round.

While her ranking does not rate center court status, Bouchard’s immense popularity does, the smiling 23-year-old stepping into the sun-kissed arena to huge applause before exiting 94 minutes later with a blank face and a sheepish wave.

Polish 10th seed Agnieszka Radwanska, the Rogers Cup winner in 2014, kicked off her North American hardcourt campaign with a regulation 6-3 6-3 win over American CoCo Vandeweghe, who lost the final in Stanford on Sunday to compatriot Madison Keys.

“In tennis you don’t have easy draws – you have bad ones, or really bad ones,” said Radwanska, who will next play either Hungary’s Timea Babos or Canadian Bianca Andreescu. “From the first round, you really have to play your best game to win.”

Catherine Bellis kept Tuesday from becoming a complete washout for the United States as the 18-year-old battled back from a set down to outlast Germany’s Julia Goerges 4-6 6-3 6-2.