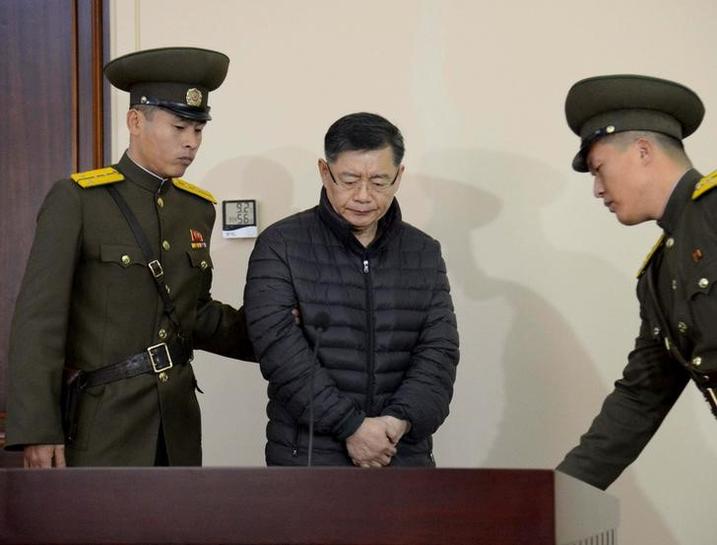 TORONTO (Reuters) – A Canadian pastor who was imprisoned in North Korea for more than two years has arrived home in Canada, where he was resting after being reunited with his family on Saturday, a family spokeswoman said.

Hyeon Soo Lim, formerly the senior pastor at one of Canada’s largest churches, had disappeared on a mission to North Korea in early 2015. He was sentenced to hard labor for life in December 2015 on charges of attempting to overthrow the Pyongyang regime.

North Korea’s KCNA news agency said on Wednesday that the 62-year-old Lim had been released on humanitarian grounds, suggesting his health was poor. His family later said he was not in critical condition.

Lim’s release comes amid heightened tensions between Washington and Pyongyang, though authorities have not said there is any connection between his release and efforts to defuse the standoff over North Korea’s nuclear program.

It was not clear if Pastor Lim would appear at the press conference, according to Pak, who said he would attend Sunday services at his church.

The Canadian government issued a statement on Saturday, saying it joined Lim’s family and congregation in celebrating his homecoming.

“Canada has been actively engaged on Mr. Lim’s case at all levels, and we will continue to support him and his family now that he has returned,” the statement said.

Lim’s family in June urged the Canadian government to bolster efforts to seek Lim’s release, following the death of Otto Warmbier, an American student who died days after being released from a North Korean prison in a coma.

Footage from Japan’s ANN television showed Lim walking on a tarmac next to Canada’s national security adviser, Daniel Jean, at the Yokota Air Base on the outskirts of Tokyo, in a stop en route to his home.

Reporting by Jim Finkle in Toronto; Editing by Chizu Nomiyama and Mary Milliken