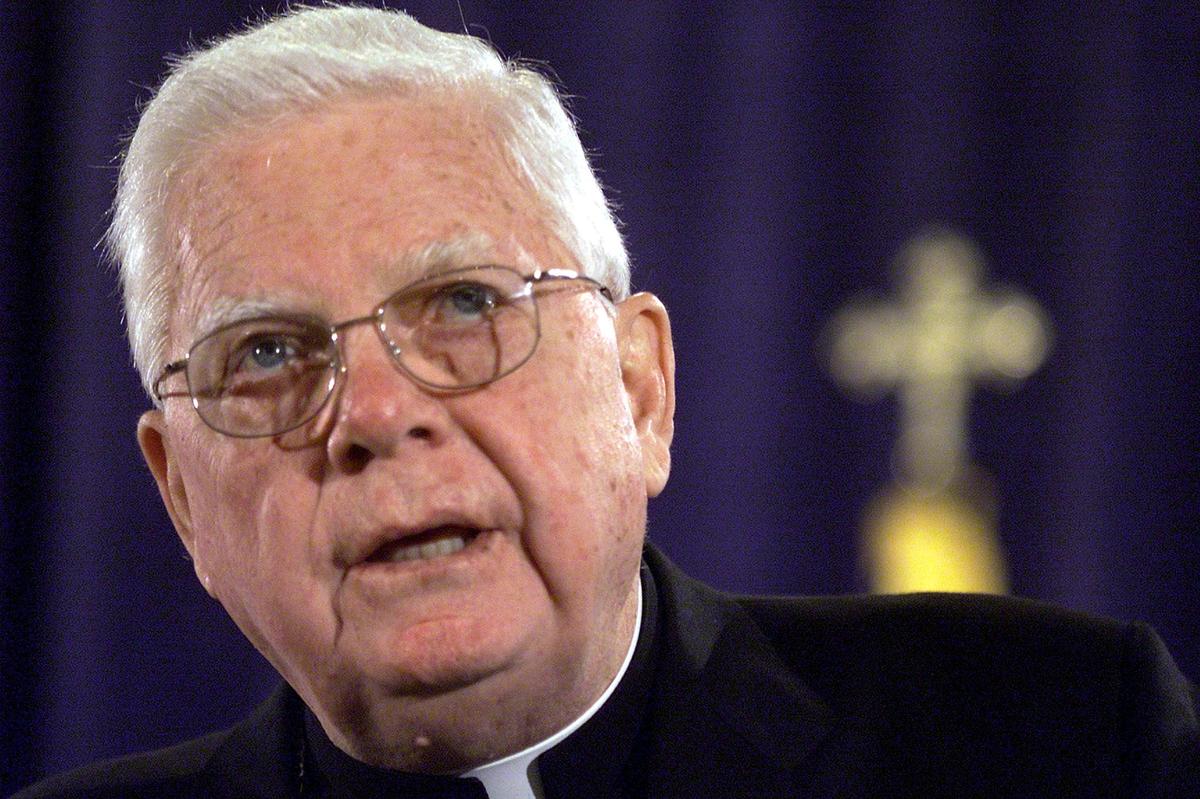 VATICAN CITY (Reuters) – Cardinal Bernard Law, the former archbishop of Boston who became a symbol of the Roman Catholic Church’s worldwide sexual abuse scandals, died on Wednesday, the Vatican said. He was 86.

Law, whose resignation from his Boston post in 2002 shocked the Church and brought abuse into the open, had been living in Rome and was in declining health in recent years.

The Vatican did not give a cause of death but sources close to Law, who died in a hospital in Rome, said he had been suffering from the complications of diabetes, liver failure and a build up of fluids around the heart, known as pericardial effusion.

Law was archbishop of Boston for 18 years when Pope John Paul – who in 1984 had appointed Law to run one of the most prestigious and wealthy American archdioceses – reluctantly accepted his resignation on Dec. 13, 2002, after a tumultuous year in Church history.

A succession of devastating stories by the Boston Globe’s Spotlight team showed how priests who sexually abused children had been moved from parish to parish for years under Law’s tenure without informing parishioners or law authorities.

The resignation sent shock waves through the American Church and began a trickle down effect around the world, as the cover-up techniques used in Boston were discovered to have been used in country after country.

“It is my fervent prayer that this action may help the archdiocese of Boston to experience the healing, reconciliation and unity which are so desperately needed,” Law said at the time.

“To all those who have suffered from my shortcomings and mistakes, I both apologize and from them beg forgiveness.”

Law had offered to step down several times before the pope accepted his resignation.

The story of how the Globe team doggedly brought the scandal to light in a city were few wanted to cross the politically powerful Church was immortalized in the 2015 film Spotlight, which won the Oscar for Best Picture.

The situation in Boston turned out to be the tip of an iceberg of abuse and its cover-up, where churchmen preferred protecting the reputation of the institution rather than the innocence of children.

Thousands of cases came to light around the world as investigations encouraged long-silent victims to go public, shattering the Church’s reputation in places such as Ireland, and forcing it to pay some $2 billion in compensation.

Six months after his resignation the Massachusetts attorney general’s office announced that Law and others would not face criminal charges.

After a period in a monastery in the United States, Law moved to Rome.

In 2004 Pope John Paul appointed Law to be archpriest of the Rome Basilica of Santa Maria Maggiore, one of the four major basilica’s of Christendom, whose gold leaf ceiling is said to be made from the first batch of the precious metal Columbus brought back from America. He is likely to be buried there.

In relative terms it was an immense fall from grace. Such posts are symbolic and ceremonial.

But victims of sexual abuse were outraged because it gave Law a second career and a golden parachute that allowed him to stay close to the center of power in Rome and serve as a member or adviser in several influential Vatican departments.

He also maintained the rank of cardinal and participated in the conclave that elected Pope Benedict in 2005.

Before he became ill, Law was a regular on the diplomatic circuit, attending receptions, including many in the gardens of the U.S. embassy to the Vatican.

While Law was the elephant in the room at U.S. receptions for a few years after his resignation, at Italian events he was treated with the same effusive obsequiousness bestowed on all cardinals – something Law appeared to enjoy.

He always declined to talk about events in Boston. “I‘m retired from that,” he told a reporter at a reception.

Law was succeed as Boston archbishop by Cardinal Sean O‘Malley, who also heads a Vatican commission advising Pope Francis on how to root out sexual abuse in the Church.

But the credibility of the commission, which was formed in 2014, has been hurt by the resignation of two high-level lay members who have accused the Vatican of dragging its feet.

“When consciousness arrives late, the means to resolve the problems also arrive late. I am aware of this difficulty but it is reality and I say it plainly: We arrived late. The old practice of moving people around and not confronting the problem made consciences fall asleep,” the pope said.

Like those of all cardinals who die in Rome, Law’s funeral is likely to be held in St. Peter’s Basilica. Funeral Masses for cardinals are said by another cardinal and the pope gives the final blessing.

Bernard Francis Law was born on Nov. 4, 1931, in Torreon, Mexico, the son of a U.S. Army official and a musician. He graduated from Harvard University and was ordained a priest in 1961.

His first assignment was in Mississippi, where he received death threats for championing civil rights. As bishop of Springfield–Cape Girardeau in Missouri, he opened a home for battered women and a center to help Vietnamese boat people.

Commentary: Loan sharks – who’s still borrowing from them in this day and age?
Commentary: My walk around Singapore was a step outside my comfort zone – and I’m all the better for it
Man gets jail for driving 13-year-old niece to car park and kissing her neck
US-Sanctioned Hong Kong Shipping Lines Linked to Single Shanghai Resident
‘A moving current’: Thai protesters adopt Hong Kong tactics