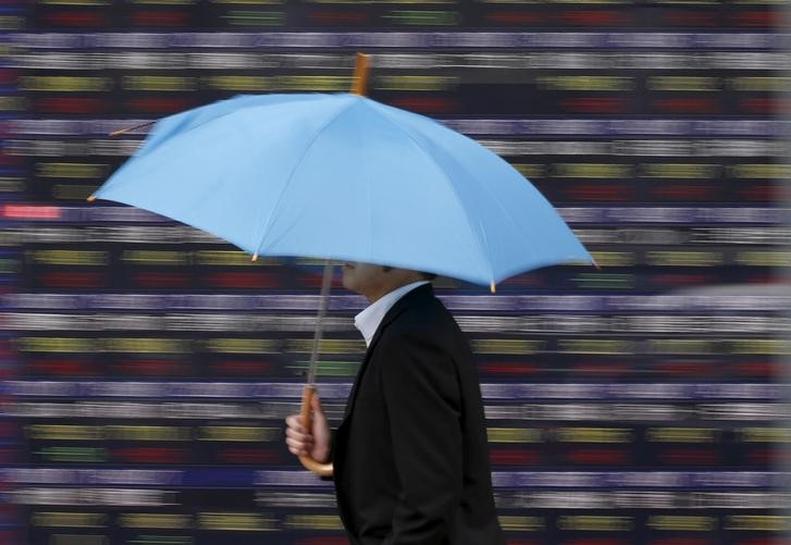 The MSCI World Index .MIWD00000PUS was almost 0.1 percent higher on Friday, just a whisker below an all-time intraday high hit earlier. It is on track to end the week 1.6 percent higher.

MSCI’s broadest index of Asia-Pacific shares outside Japan .MIAPJ0000PUS advanced 0.2 percent to its highest level in two years. It’s set for a 3.1 percent gain for the week, its biggest since mid-March.

Wall Street edged higher on Thursday, with the major indexes .DJI .SPX .IXIC up between 0.1 and 0.2 percent, as stocks basked in comments by Federal Reserve Chair Janet Yellen that the central bank’s rate hikes could be gradual, given persistently low inflation despite an improving economy.

“The U.S. profit reporting season looks likely to be a key market driver over the next couple of weeks,” Ric Spooner, chief market analyst at CMC Markets in Sydney, wrote in a note.

“Full valuations suggest that the market is yet again going into this reporting season anticipating results to outperform consensus analyst expectations.”

In Asia, markets are also expecting strong earnings, particularly for many of the export-reliant firms benefiting from an upturn in global demand.

The dollar index .DXY, which tracks the greenback against a basket of trade-weighted peers, was steady at 95.715, on track for a 0.3 percent weekly decline.

The dollar was supported by data showing the number of Americans filing for unemployment benefits fell last week for the first time in a month and producer prices unexpectedly rose in June.

Investors are awaiting a host of U.S. economic indicators, including core inflation, retail sales and industrial production for June later in the session for more insight into how the Fed might proceed with monetary policy tightening this year.

“After their June rate hike, the Fed is seen watching inflation trends carefully before tightening policy again. So market interest towards inflation data is very high and the dollar is likely to move widely in either direction,” said Masafumi Yamamoto, chief currency strategist at Mizuho Securities.

For now, markets appear to be shrugging off the revelation by U.S. President Donald Trump’s son this week that he’d met with a Russian lawyer during the 2016 presidential campaign after being told she might have damaging information about Democratic candidate Hillary Clinton.

But political concerns in the U.S. may once again vex investors, as a revised Senate plan to dismantle Obamacare drew criticism from both Republican and Democratic senators.

Senate Majority Leader Mitch McConnell, who was forced two weeks ago to scrap a planned vote on an earlier version, has planned for a vote on the retooled bill next week.

The European Central Bank is likely to signal in September that its bond-buying scheme will be gradually wound down next year and ECB chief Mario Draghi could give the next clue on the plans in late August, the Wall Street Journal said on Thursday.

The Canadian dollar CAD= remained near its strongest in over a year after the Bank of Canada this week raised interest rates for the first time since 2010, with further tightening expected this year.

The loonie was marginally weaker on Friday at C$1.2731 to the dollar but is up 1.1 percent this week.

In commodities, oil was mostly steady as high fuel inventories despite supply cuts by the Organization of Petroleum Exporting Countries tussled with data that showed a jump in China’s oil imports in the first half of 2017.

Global benchmark Brent LCOc1 was also little changed at $48.43 following Thursday’s 1.4 percent jump, and is headed for a 3.7 percent gain this week.