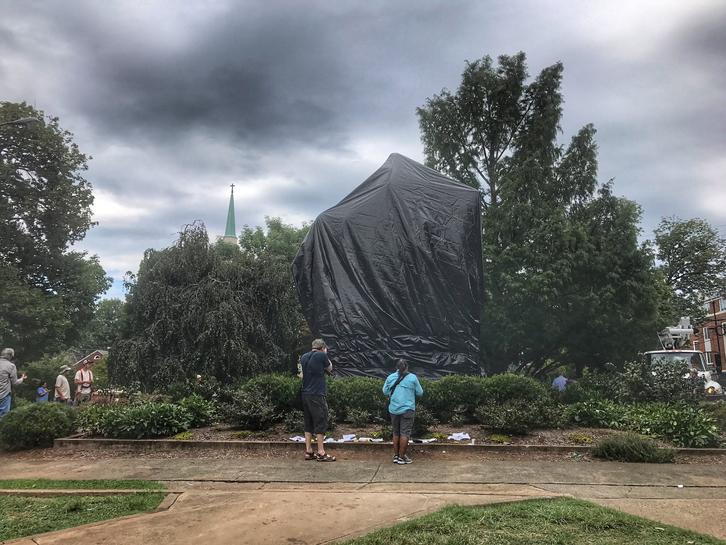 (Reuters) – To applause from spectators, workers in Charlottesville, Virginia, covered two statues of Confederate generals with black tarpaulins on Wednesday in honor of the woman who was killed during a rally by white nationalists in the liberal-leaning college town.

City councilors voted unanimously to cover the monuments during a raucous council meeting earlier this week where activists and residents demanded to know how the Aug. 12 rally had got so badly out of hand.

The council wants to remove the statues of Confederate Army generals Robert E. Lee and Thomas “Stonewall” Jackson, but cannot do because of a pending lawsuit challenging the city’s plan. So the council ordered them to be covered.

The Aug. 12 rally was organized by white nationalists who objected to the plans to remove the statues from a local park. A 32-year-old local woman, Heather Heyer, was killed when a man crashed a car into a crowd of anti-racism counter-protesters.

A growing number of U.S. political leaders have called for the removal of statues honoring the pro-slavery Confederacy. Civil rights activists charge the statues promote racism while advocates contend they are a reminder of their heritage.

In the latest fallout from the violence in Charlottesville, which is home to the University of Virginia, known as UVA, cable sports channel ESPN removed a play-by-play announcer also named Robert Lee from coverage of an upcoming UVA football game.

The decision to remove Lee, which sparked anger on social media, was made for safety reasons, ESPN spokeswoman Keri Potts said. Sports media website Outkick the Coverage broke the story on Tuesday that Lee was pulled from the Sept. 2 game to avoid offending viewers.

“When the protests in Charlottesville were happening, we raised with him the notion of switching games,” ESPN spokesman Chris LaPlaca said. “We didn’t make him. We asked him. Eventually we mutually agreed to switch.”

The network originally planned for Lee to work during UVA’s game against the College of William & Mary.

“This wasn’t about offending anyone,” ESPN said. “It was about the reasonable possibility that because of his name he would be subjected to memes and jokes and who knows what else.”

ESPN rescheduled Lee to work during Youngstown State’s game at the University of Pittsburgh on the same date, Potts said.