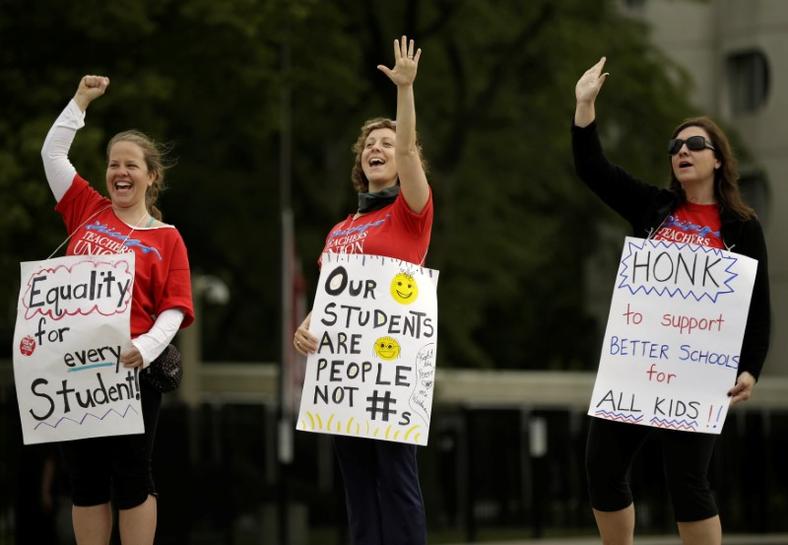 CHICAGO (Reuters) – After trying for years to stymie the growth of charter schools in Chicago, leaders of its public school teachers’ union are seeking to enlist staff from charter schools in a bid to strengthen the union’s bargaining power and tap a new source of members’ fees.

Union officials in the third-largest U.S. city say their push for a tie-up took on added urgency after U.S. President Donald Trump chose Betsy DeVos, a backer of charter and private schools, as his education secretary.

In cities and suburbs across the country, charters and traditional public schools have been in fierce competition for students and financing. But many are united in their rejection of private schools and voucher programs.

Unions fear Trump and DeVos will slash funding for traditional public schools, and the Chicago Teachers Union (CTU) wants charter members to boost their ranks in order to help them fight back.

A more unified approach has long been the answer, said Jesse Sharkey, vice president of the CTU.

“I don’t think we’re going to get to keep public education the way we currently think of it unless people organize and prepare to defend it,” he said.

Charter schools are free and open to the public but are run independently of local school districts by private companies that compete for state funds. They often boast small class sizes, innovative teaching styles or a particular academic focus. Their numbers in the United States have shot up to more than 6,000, from 2,500 a decade ago.

The possibility of a merger has many eyes on Chicago, where the proportion of charter school teachers who are unionized on their own is much higher than in other cities.

Leaders of the city’s unionized charter school educators say they see the benefits in joining forces with the CTU.

“We face an existential crisis,” said Chris Baehrend, president of Chicago’s union for charter teachers. “The answer to every crisis is more solidarity. It’s better for us to be a small part of a larger voice that wins things.”

Vote Due in the Fall

Leaders of his 1,000-member organization had been mulling a merger with the CTU for years, Baehrend said, but Trump’s election propelled them into action from fear of his and DeVos’ conservative agenda.

DeVos’ office did not respond to requests for comment.

In June, the education secretary faced hostile questions from a U.S. Senate committee about her support for school vouchers, to which DeVos responded that she was only exploring the possibility of a program.

Vouchers are state-funded payments families can use to send children to private schools.

Supporters say they could give those children in neighborhoods with weak public schools the chance of a better education at private institutions. Critics say they are intended to boost private-sector profits with public money.

A majority of Baehrend’s organization voted in June to merge with the CTU.

The CTU’s leadership favors the merger, and its 23,500 members will vote on it in the fall. Baehrend said he is confident the measure will pass.

Not everyone supports the closer links.

Some supporters of charter schools say the attributes that attract many parents, including their flexibility and autonomy, could be put at risk in Chicago if the CTU introduces new terms for contracts, such as limits on the time an instructor can teach each day.

“They’re now trying to find ways to undermine the existing schools via organizing,” Andrew Broy, president of the Illinois Network of Charter Schools, said of the CTU’s leaders.